The world’s thirst for electricity this year has led to an uptick in coal consumption and cut into U.S. natural gas consumption, according to the International Energy Agency (IEA). 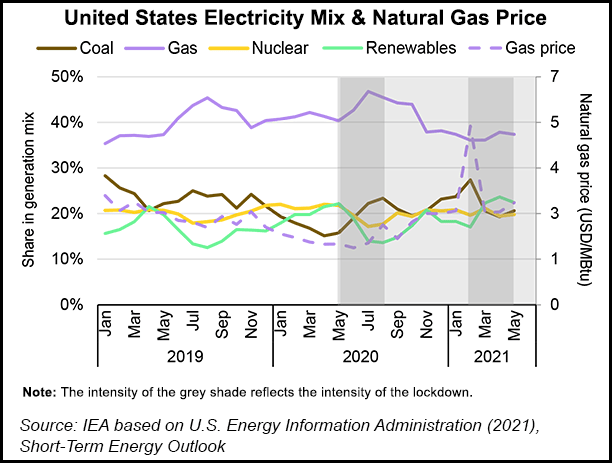 The global energy watchdog earlier this month said the world is getting back  to business following the depths of the pandemic, with energy demand rising quickly.

Coal generation had lost ground mostly to natural gas and more recently, it has given ground to renewables. However, sharply rising energy demand overall has given coal an edge.

For example, U.S. gas-fired generation had been on a tear before Covid-19, with consumption peaking last July at 44%, according to IEA. Domestic gas demand, though, fell to around 35% in the last two months of 2020.

“This decline was set off by gas-to-coal switching, as gas prices began to climb after their Covid-19 lows of below $2/MMBtu in July 2020, and by higher renewable generation,” IEA researchers noted.

For the first five months of 2021, the share of gas in U.S. generation still had not recovered to last summer’s generation levels. From January through May, domestic gas-fired generation averaged 33-34%.

“In contrast, coal’s share picked up after a monthly low of 15% in April 2020, which was also the month with the lowest electricity demand that year,” researchers said.

The U.S. Energy Information Administration (EIA) had noted in late 2020 that U.S. gas-fired generation had jumped since 2015 in most areas of the country.

Still, coal has managed to make inroads this year in the United States. The gains came in part because of the unprecedented winter freeze, according to IEA.

The weekly share of U.S. coal use “peaked at 30% in February,” during Winter Storm Uri, as a bundle of gas power generation was forced offline. From March through May, U.S. coal use then stabilized to around 20% of the domestic generation mix, with renewable output increasing.

Global electricity demand fell by around 1% last year because of Covid-19. On the expected economic recovery, though, consumption should be up by around  5% this year and by another 4% in 2022. Most of the gains are forecast to come from the Asia Pacific region, primarily China and India.

Worldwide gas demand overall is forecast to rise by 3.6% in 2021 before easing to an annual growth rate of around 1.7% from 2022-2024, IEA said earlier this month in its quarterly Gas Market Report.

Gas used for electricity beyond the United States has faced stiff competition, however.

“The growth of gas lags that of coal because it plays a smaller role in the fast-growing economies in the Asia Pacific region and it faces competition from renewables in Europe and North America,” IEA noted.

Meanwhile, the global renewables generation market should increase by 8% this year and by more than 6% in 2022. Still, its share of the global generation mix is likely to meet only one-half of the projected increase in demand.

Fossil fuel-based electricity generation is still set to provide 45% of additional demand in 2021 and 40% in 2022, with nuclear power accounting for the remainder. The result will be rising carbon dioxide (CO2) emissions from the electricity sector, which had fallen in 2019 and 2020. CO2 emissions now are expected to increase by 3.5% in 2021 and by 2.5% in 2022, “which would take them to an all-time high,” researchers noted.

In IEA’s recent Roadmap to Net Zero by 2050, researchers had said nearly 75% of global CO2 reductions between 2020 and 2025 would need to be from the electricity sector. The net-zero goal also is forecast to be achieved only if coal-fired electricity generation worldwide falls by more than 6%/year.

IEA also is seeing other types of stressors affecting electricity.

Since the end of 2020, it said extreme cold, heat and drought have led to “serious strains and disruptions to electricity systems across the globe — in countries ranging from the United States and Mexico to China and Iraq.”

To that end, the agency is establishing an Electricity Security Event Scale to track and classify major power outages. The data is going to be based on the duration of the disruption and the number of affected customers.

“The Texas power crisis in February, where millions of customers were without power for up to four days because of icy weather, was assigned the most severe rating on this scale,” researchers noted.