Although the natural gas supply outlook has improved in recent weeks, analysts are steadfast in their convictions that higher prices are needed in the coming months to prevent a significant supply shortfall next winter. 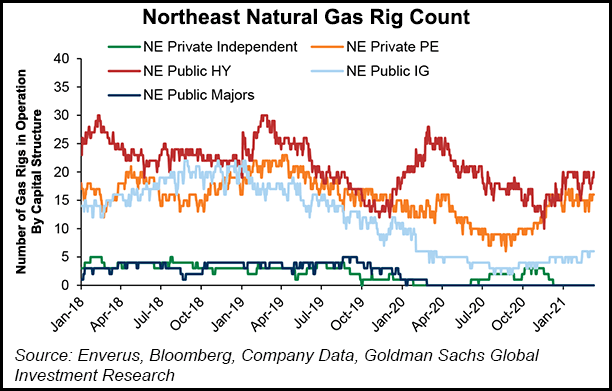 A Goldman Sachs Commodities Research team, led by Samantha Dart, said this week it is maintaining a $3.25/MMBtu price forecast for this summer (April-October), above the current New York Mercantile Exchange forwards strip, which is averaging around $2.71.

Current forward prices point to storage stocks falling to 1,084 Bcf by the end of March 2022, according to Goldman. Should U.S. gas prices follow the current forward curve through October, the firm estimates winter 2021-2022 gas prices would need to rally to at least $3.70, more than 25% above current forwards, to help take March 2022 storage above 1,500 Bcf.

“Despite softer balances, we continue to see significant upside risk to winter 2021-2022 prices from $2.93 currently should the rally in summer U.S. gas prices be further delayed,” said the Goldman team.

Raymond James & Associates Inc. analysts also modeled a steep decline in U.S. storage stocks using current forward prices. The team showed inventories reaching 3.3 Tcf by the end of November, which is roughly 600 Bcf below November 2020 inventories. Storage levels are then expected to fall to the “unacceptable” level of around 1.6 Tcf by November 2022, which is more than a 50% reduction year/year.

“We believe there is little chance that gas in storage will fall that much in a single year,” said the Raymond James team, led by analyst J.R. Weston. “In our view, this means that there is a fundamental disconnect between current oil and gas futures strip prices. Commodity prices must move much higher than the current strip to help balance the market next year.”

With the recent pullback in gas prices amid more springlike weather and subsequent rise in expected coal-to-gas switching, Goldman analysts expect current forwards to result in a 0.9 Bcf/d increase in power burns for the summer and a 0.6 Bcf/d bump for the winter.

The firm’s researchers have made other small adjustments to their outlook.

On the export front, the team has moved forward the start-up of the Calcasieu Pass liquefied natural gas (LNG) terminal as well as the sixth production unit at Sabine Pass LNG.

Meanwhile, the Raymond James team said gas-to-coal switching is the main culprit for the differences between current 2021 forward prices and their base price forecast. A roughly $2.80 strip price forecast implies around 1 Bcf/d of additional gas demand because of lower prices in 2021 versus the $3.10 Raymond James case, they said. This corresponds to a more than 350 Bcf variance in ending storage in 2021 versus the firm’s case.

“Moreover, there is also a cumulative impact from 2021 in 2022 due to starting 2022 with lower inventories,” analysts said. The variance grows by another roughly 2 Bcf/d when looking at 2022 price assumptions of roughly $2.65 strip and about $3.30 for the Raymond James case.

“Accordingly, we remain confident in a bullish trajectory for U.S. natural gas fundamentals.”

Analysts’ views are mixed on how production fares this year, but no significant increases are on the table.

Goldman analysts said gas production from the Bakken Shale, Niobrara formation and in Texas, except for the Permian Basin, has held at “better-than-expected” levels. Carried forward, the higher output raises the analysts’ summer 2021 production expectations under current forward prices by 0.5 Bcf/d to 90.2 Bcf/d.

There could be some changes on the supply front if summer prices were to move closer to Goldman’s $3.25 forecast, however. Such an increase could lead to a temporary lifting of Calendar Year 2022 prices and allow for incremental production hedging into next winter. This would incentivize more than 1 Bcf/d of incremental gas production next winter from areas like the Haynesville and non-Permian Texas, analysts said.

Northeast producers plan to remain in maintenance mode this year, and researchers expect production to be fairly flat year/year this summer at 31.9 Bcf/d.

The Raymond James team added that the capital discipline has been further encouraged by the tight situation for takeaway in Appalachia. This should keep supply moderated irrespective of prices at Henry Hub.

The Haynesville, meanwhile, is likely to accommodate some production growth.

Production guidance from major producer Comstock Resources Inc. suggested about 10%, or 130-200 MMcf/d, of growth from 4Q2020 levels. However, “with other public Haynesville producers offering less aggressive growth guidance for this year, we see this as consistent with our current expectations of Haynesville production up 0.5 Bcf/d year-on-year this summer under current forwards,” Goldman analysts said.

The Haynesville, however, is expected to experience “meaningful growth” in the next two years as rigs have recovered much faster in the basin, according to Raymond James. Meanwhile, well productivity in the basin saw one of the biggest jumps in several years during 2020, and well cost declines have further padded well internal rates of return in the basin. Raymond James is modeling activity to climb higher over the next year, resulting in nearly 1 Bcf/d of year/year production growth in 2022.

“This sticks out ‘like a sore thumb’ against the broader decline of dry gas volumes,” the firm’s analysts said. “In fact, we estimate that total dry gas production declines 1.9 Bcf/d in 2021 and 0.4 Bcf/d in 2021/2022, due in no small part to the capital discipline of operators.”

Associated gas plays, meanwhile, are projected to decline nearly 2 Bcf/d in 2021 and stay roughly flat in 2022, according to Raymond James models. This would occur even under bullish oil price decks in which West Texas Intermediate (WTI) crude prices average $68/bbl in 2021 and $72 in 2022.

However, Societe Generale analysts noted Monday that now that WTI prices have reached their highest level since April 2019, this has triggered concerns about renewed activity in the United States. The firm pointed out that the number of rigs operating in the Permian has moved above 200 for the first time since April 2020.

For example, Chevron Corp. earlier this month said it is restoring its 1 million b/d production target in the Permian by 2025 that it had in place before the Covid-19 crisis.