A recent survey of fleet operators concludes that they generally support higher national fuel efficiency standards for medium- and heavy-duty trucks, according to a report commissioned by an alternative fuel vehicle advocacy group. 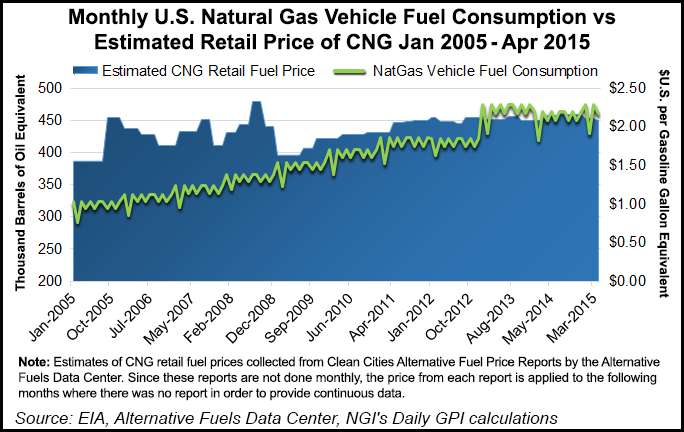 The report, “Higher Fuel Economy — Working for Fleets,” from the clean transportation organization CALSTART was released at a hearing Tuesday held by the U.S. Environmental Protection Agency (EPA) and the National Highway Traffic Safety Administration (NHTSA) in Long Beach, CA to gain input on the proposed new mileage and greenhouse gas (GHG) emission standards for trucks.

“We plan to submit comments before the deadline raising some issues that we are still collecting feedback on from our members,” Godlewski told NGI. Overall, the CALSTART report showed that fleet managers support improved fuel-saving, but they also are concerned about higher vehicle and maintenance costs, said Phillip Russo, CEO of the NAFA Fleet Management Association (NAFA), which collaborated with CALSTART to gather feedback from fleet operators for the report.

Russo said the report demonstrates that additional upfront costs from more fuel-efficient vehicles will be offset by even larger fuel savings. “This report addresses head-on one of the primary concerns of the industry has had about boosting fuel efficiency,” he said.

With a large swath of the new technology heavy-duty trucks on the road, California stands to benefit the most from the proposed new federal standards, the EPA and NHTSA representatives were told by Tom Fulks, from the Diesel Technology Forum.

With backing from the statewide partnership, new CNG stations are slated for Rifle, CO, by Sparq Natural Gas; in Gunnison, by Trillium CNG; in Henderson by Ward Alternative Energy; and in Denver by VNG. This is part of Colorado’s $30 million, four-year effort for expanding the use of alternative transportation fuels, which was started last year (see Daily GPI, May 2, 2014).

About half of the program funds — $15 million — has been designated to develop 25 to 30 CNG stations along major statewide transportation corridors, creating an intrastate network for natural gas vehicles (NGV), state officials said.

This is Trillium’s second station in Colorado. It earlier built and operates the private CNG station used by the Roaring Fork Transportation Authority for its municipal bus system providing service to Aspen and Rifle. Western Tank’s President Al Butler said he likes the economic and environmental advantages of CNG over diesel or gasoline.

Earlier this month Trillium with its joint venture (JV) partner ampCNG announced the opening of the JV ampTrillium’s 22nd CNG station in Newport, TN, near state and interstate highways 2570 and 40, respectively in eastern Tennessee.

The ampTrillium JV has plans to open at least 100 stations as it pursues a mission to “make CNG more readily available for both the trucking industry and the general public,” the company spokesperson said.

Elsewhere, other CNG stations were opened by TruStar Energy, in Tulsa, OK and Liberal, KS. The latter is a public access station for CNG Energy, and the one in Tulsa is a TruStar brand facility. “We have embarked on a strategy to open dozens of company-branded public CNG stations along high-traffic U.S. corridors during the next several years,” said TruStar President Adam Comora in announcing the two new stations.

In Tulsa there will be two traffic lanes and two fast-fill fueling pumps, providing quick access to both commercial and private NGVs, a company spokesperson said. Natural gas for the station will be provided by Apache Corp.

The Kansas station is aimed at meeting what TruStar described as a growing need for CNG fuel for fleets operating out of Liberal, serving the surrounding southwest Kansas and Oklahoma Panhandle region. A unit of Black Hills Energy will supply the natural gas.