Dry natural gas production in the United States, boosted by stronger pipeline flows from the Marcellus Shale, led Goldman Sachs analysts on Monday to revise their forecasts down for prices and lift expectations for end-of-summer storage levels. 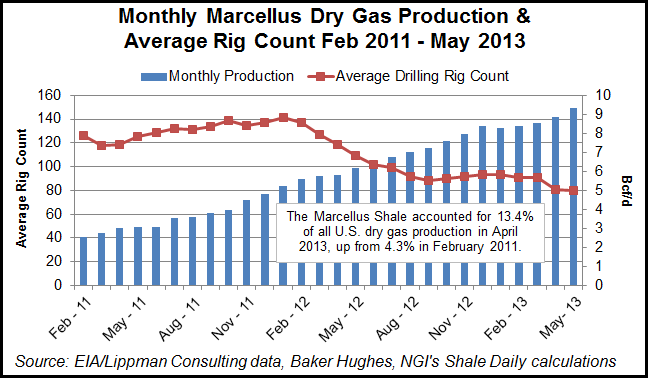 “Our expectation that production will now grow at 0.25 Bcf/d in 2013 leads us to raise our end of summer storage level to 3.775 Tcf, 100 Bcf above our previously published forecast, as well as raise our expected 2013 coal-to-gas switching by 0.15 Bcf/d,” wrote Damien Courvalin, Jeffrey Currie and Samantha Dart in a note to clients.

“This increase in the need for coal-to-gas switching, as well as the recent decline in [Central Appalachian] coal prices, which we now assume will average $57.00/ton versus our previous $60.00/ton expectation, lead us to lower our U.S. natural gas prices forecast for the remainder of 2013.”

“Pipeline flows point to the Marcellus and Utica shales as the key drivers to the recent production growth with Southwest Pennsylvania and West Virginia production increasing meaningfully over the past few months. With rig counts stable in the Marcellus, this growth in production is most likely driven by the addition of new processing plants that are allowing uncompleted wells to come online (for example in West Virginia: the Mobley II, Majorsville III, Sherwood II and Natrium processing plants).” MarkWest Partners Energy LP is building and operating the Mobley, Majorsville and Sherwood facilities (see Shale Daily, May 13). Dominion built the Natrium complex (see Shale Daily, Oct. 29, 2012).

“Additional processing plants coming online later this year and the uncertainty on the size of the backlog of uncompleted wells are the key risks to our expectation that U.S. production growth will slow in 2H2013. Beyond this backlog, the upcoming earnings season will be important in assessing to what extent increased rig and/or well productivity has also contributed to this higher-than-expected production growth, as these drivers would likely be more sustainable.”

Higher gas production realized in 2H2013 “will lead to lower year-on-year growth, with the next comparison for the year expected around 250 MMcf/d, in our view,” wrote Courvalin and his colleagues. The increase in output is viewed as temporary because the horizontal rig counts reached “new lows” in late June.

Growing production has accelerated U.S. gas storage levels back to average seasonal numbers, even with slightly hotter-than-expected summer weather, which offset the May/June weather-implied cumulative storage surplus,” said analysts. “In the Goldman team’s view, the higher than seasonal injection levels indicate that coal-to-gas switching demand has continued to fall, “likely below 2 Bcf/d in June,” which tracks expectations for less switching over the course of this year.

“We have estimated in the past that $4.25-4.50/MMBtu (on a sustainable basis) will be required for dry gas drilling activity outside of the Marcellus to make economic sense again. In addition, we would argue that the price required for an actual pick-up in drilling activity could be even higher as most producers remain focused on liquids-rich opportunities.

“Further, once the decision is made to increase gas-directed drilling, there is a lead time involved in reallocating capital, moving back rigs and actually bringing new wells on. As a result, we reiterate our 2014 Nymex natural gas price forecast of $4.25/MMBtu and see a risk that the whole curve shifts even higher to get the production response required to balance the market in 2014 and beyond.”