Crestwood Equity Partners LP expects the higher commodity prices that drove increased drilling and completion activity in the second quarter of 2021 to fuel even higher utilization of its assets in core areas for the remainder of the year. 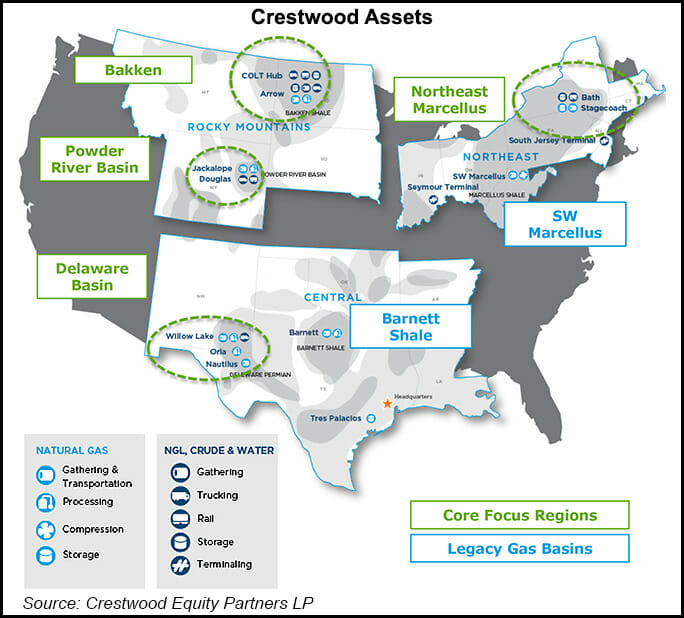 The Houston-based midstreamer’s gathering and processing (G&P) segment, which was hit hardest during last year’s Covid-induced doldrums, “has been carrying us this year with a strong pickup,” according to CEO Bob Phillips. He told investors on the 2Q2021 earnings call Tuesday that results in the Bakken and Barnett shales, Powder River Basin and Permian Delaware sub-basin are solid. Crestwood is seeing “better-than-expected producer activity as a result.”

In the Bakken, producer customers “are finally seeing a significant positive netback” on natural gas and natural gas liquids production for the first time since early 2019, a trend expected to continue into next year. The strong pricing outlook, enhanced gas capture practices and increased focus on flare minimization by producers resulted in G&P gas volumes increasing nearly 60% year/year in 2Q2021 on the Arrow gathering system, Phillips said. The Arrow system is able to carry gas, crude and water.

However, Phillips said a short-term spike in volumes is expected when those wells begin to return to service, which Crestwood is starting to see in July. Meanwhile, Arrow gas volumes should remain high, while crude oil and water volumes should rise in the second half of the year.

Crestwood management expects “a fairly wide range” of 20 to 35 new well connects to come online between July and November. Many of those are waiting on either completion crews, according to Phillips. Others are waiting on optimizations to the Crestwood system to create more capacity at the wellhead.

For the remainder of the year, Crestwood expects producers to run up to two rigs on the Fort Berthold Indian Reservation. When paired with completion crews working through existing drilled but uncompleted inventories, the activity is projected to result in total well connects within the previously guided range of 30 to 45 new wells.

Crestwood also is set to continue working on the second phase of the southern expansion of Arrow’s produced water gathering infrastructure. It spent $5.3 million during the quarter to complete the first phase, as well as several debottlenecking projects on the gas gathering system.

The second quarter also brought about increased volumes in the Permian Delaware, which spans West Texas and southern New Mexico. Phillips said there are currently five rigs running on Crestwood’s Delaware assets, which are driving incremental volumes through both gathering systems and the Orla processing plant.

The executive expects 40-50 wells to be connected to the Crestwood assets in the second half of the year, boosting Orla processing utilization to around 75% in the second half of 2021. During the second quarter, produced water gathering averaged 51,000 b/d as the anchor customer continued to run two rigs on the dedicated acreage.

Phillips said there is “a lot of active work in and around making well connections on Nautilus,” and building new pads and extensions and adding compression around the Willow Lake system. “We’re getting that done at or under budget. We’re getting it done on time, and we’re seeing a lot of producer well activity in that area.”

Crestwood also has seen a modest increase in utilization of its Desert Hills produced water system, which is expected to continue in the second half of the year. The company has “a few projects to complete around that.”

In the PRB, Crestwood’s primary producer customer — Chesapeake Energy Corp. — held volumes relatively flat across the first half of the year. However, Crestwood added some third-party wells on new production and has “a few more” turned in-line wells on the schedule in the second half of the year.

“We’re looking for a slight increase in volumes there, and we’re actively engaged with a number of Powder River producers as they begin to restart their activity in the basin” and look toward development plans for the remainder of 2021 and through 2022, Phillips said. The CEO noted that Crestwood is in “a very strong competitive position” to be able to utilize the Jackalope gathering system and fill up excess capacity at the Bucking Horse processing plant complex.

Crestwood management noted that with transactions completed with First Reserve Corp. and Kinder Morgan Inc. during the quarter, full year 2021 distributable cash flow (DCF) is expected to be between $345-$375 million. Free cash flow (FCF) should be in the range of $150-180 million.

“These ranges reflect out-performance from our remaining asset-base relative to our internal budgets and prior guidance ranges,” CFO Robert Halpin said.

The midstreamer invested around $6.4 million in consolidated growth capital projects and joint venture contributions during the quarter. It remains on track to invest between $35-45 million of growth capital for the full year to expand and optimize its G&P systems. Another $20-25 million is to be spent on maintenance capital projects for the year. Crestwood expects to fund its total 2021 capital program entirely with retained cash flow.

“With our financial targets now achieved, Crestwood is committed to utilizing its financial flexibility to maintain a strong balance sheet and enhanced total returns to our investors,” Halpin said. “We plan to accomplish this by offering a secure and stable distribution, prudent investment in the highest-returning expansions of our existing assets, and opportunistic common and preferred unit repurchases with our excess cash flow.”

The executive said this strategy best positions the company to “maximize value creation” for investors and to evaluate and participate, “as appropriately,” on potential asset and corporate consolidation opportunities that it expects to occur across the midstream sector.

To that end, Phillips said Crestwood management would not be “out there actively looking for some big consolidation play.” After all, it “got smaller to survive,” the CEO said, noting the recent buying out of the general partner and other transactions.

“During the first half of 2021, Crestwood has proactively taken action to differentiate the partnership from our peers by simplifying our ownership structure, enhancing our corporate governance and achieving our deleveraging targets, resulting in industry-leading unitholder alignment and financial flexibility,” Phillips said.