Imports of Canadian natural gas supplies through the western United States were subdued in April and May amid higher prices north of the border, according to the U.S. Energy Information Administration (EIA). 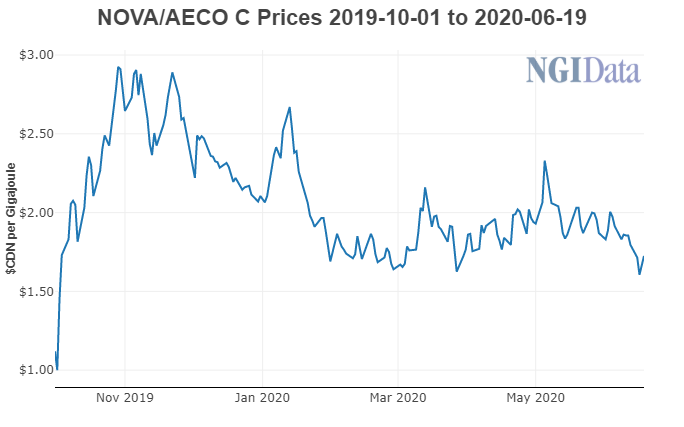 The EIA said that Canadian imports through western pipelines fell to an estimated average of 6.2 Bcf/d in April and increased only marginally to an average of 6.3 Bcf/d in May. The projections were based on pipeline flow data from Genscape Inc. EIA noted that Canadian imports by pipeline into the western United States make up the bulk of imports and tend to be less seasonal than imports by pipeline in the eastern part of the country.

Though tepid demand resulting from Covid-19 is likely behind some of the reduced flows heading south, higher spot gas prices in Alberta, Canada, where nearly all of the country’s natural gas is produced, also are keeping gas within the province.

NGI data show that NOVA/AECO C spot gas prices consistently ranged between $1-2/MMBtu below Henry Hub from mid-2017 until late 2019. However, from October 2019-March, there was little difference in spot prices at those two points, with AECO even averaging 2.5 cents above the U.S. benchmark during that time.

The Canadian Energy Regulator last September approved a temporary service protocol (TSP) for the Nova pipeline system, which allowed additional service flexibility during maintenance periods and, in particular, allowed deliveries to storage facilities during periods when the system is constrained. Shortly after the TSP approval, the difference between AECO spot prices and Henry Hub narrowed, EIA said.

These operational changes in Western Canada’s natural gas pipeline system and narrowing differences in spot prices have resulted in less natural gas being exported to the United States, especially at border crossings in Montana and North Dakota, according to the EIA. Natural gas imports in Montana and North Dakota in the first five months of 2020 averaged 0.4 Bcf/d and 0.3 Bcf/d less, respectively, compared with the first five months of 2019, it said.

In its most recent Short-Term Energy Outlook, the EIA projected that gross imports of natural gas by pipeline into the United States would fall to 7.0 Bcf/d in 2020 from 7.4 Bcf/d in 2019. Imports then are expected to increase to 7.9 Bcf/d in 2021. EIA’s forecast of 7.0 Bcf/d for this year would be the lowest level of annual U.S. natural gas imports by pipeline since the mid-1990s.