The highly controversial 26-year reign of Carlos Romero Deschamps as leader of the union of the Mexican national oil company Petróleos Mexicanos (Pemex) has reached its end. 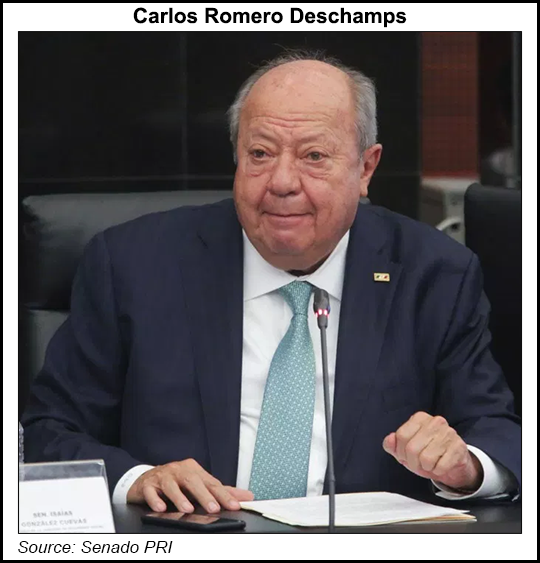 President Andrés Manuel López Obrador on Wednesday announced that the Attorney General’s Office is investigating “matters relating to financial resources obtained in the course of inquiries by the financial intelligence unit of the Finance Ministry,” and Deschamps resigned later in the day.

The financial intelligence unit specializes in the money laundering of proceeds from such illicit activities as the narcotics trade and financial corruption in general.

López Obrador earlier had said that Romero Deschamps would be “within his rights” to leave his union post in order to confront any accusations that he might face.

Romero Deschamps and his life of luxury have been an embarrassment for a president whose image of austerity in his personal life and in government is his watchword, and the union head’s resignation is a symbolic victory for a government that swept to power on the promise it would end corruption.

Romero Deschamps was once regarded by most of Mexico’s liberal and political business classes as a fine young labor leader of noble principles, David Shields, editor and publisher of the Energía a Debate magazine told NGI’s Mexico GPI.

His arrival to the union leadership came within a couple of years of the political demise and jailing of Joaquín Hernández Galicia, better known as La Quina, who led the union as general secretary.

La Quina made the union into a business empire from the earnings of generous percentages of Pemex contracts. His reign was marked by violence and accusations of gangsterism.

In 1989, early in the administration of President Carlos Salinas de Gortari, La Quina’s home near the Pemex refinery in Ciudad Madero, Tamaulipas, was attacked by the army and he was jailed for murder, to loud cheers from business leaders and the middle classes in general.

“Most people in business and in the media felt grateful to Salinas for having rid the union of La Quina,” Shields said. “Romero Deschamps seemed such an approachable and well-meaning fellow by contrast.”

But that was before “Pemexgate,” he added, a scandal in which the union was found to have channeled millions of Pemex dollars into the 2000 electoral campaign of the Partido Revolucionario Institucional (PRI), which ruled Mexico under a one-party system for much of the last century.

The PRI lost in 2000 for the first time ever to an opposition candidate, Vicente Fox of the pro-business Partido Acción Nacional (PAN), and Romero Deschamps was never prosecuted for his role in Pemexgate, nor in other scandals in which he was accused of involvement.

Allegations of improper use of Pemex funds for political purposes have not, however, gone away. Emilio Lozoya was the first Pemex director-general of the Peña Nieto 2012-2018 administration and is now facing charges that he received a bribe from the Brazilian constructor Odebrecht SA of some $5 million as a contribution to Peña Nieto’s election campaign.

Under the terms of labor laws inspired by negotiations over the United States-Mexico-Canada Agreement (USMCA), the proposed sequel to the North American Free Trade Agreement, Mexican unions have promised to appoint their leaders by free and fair elections.

“The new laws were approved in the early stages of the current administration,” independent analyst Arturo Carranza told NGI’s Mexico GPI. “That should mean a fair and democratic electoral process, including secret ballots, not the traditional show of hands.”

The president has been sharply criticized for what many see to be an over-emphasis on investment in the oil industry in a country which has many other social and economic needs.

Such views, of course, are unlikely to be favored by oil workers, Luis Miguel Labardini, a partner in the Mexico City-based Marcos y Asociados, told NGI’s Mexico GPI.

“A trade union that could be considered as a genuine stakeholder of the company and its project could well improve Pemex’s corporate government, particularly when it refrains from grabbing at the corporate pursestrings, as it certainly has in recent years.

“The union has been taking a very large and totally disproportionate slice of Pemex income,” Labardini added.