Proppant oilfield service operators are preparing for a likely decline in U.S. land operations through the second half of this year and into 2020, with a “rationalization of supply” said already underway. 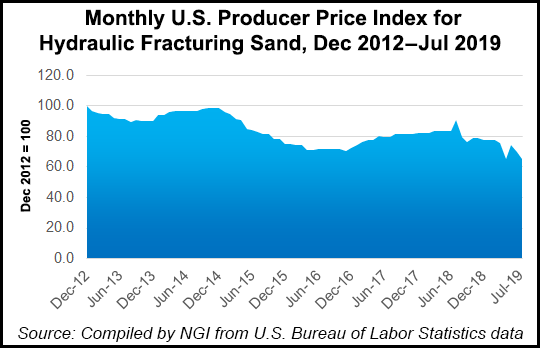 Two of the biggest sand operators for Lower 48 exploration and production (E&P) companies, Hi-Crush Inc. and U.S. Silica Holdings Inc., each reported solid performances for the second quarter. However, each is also eyeing slower activity through the end of the year as their customers avoid overspending.

“We have been in constant communication with our customers regarding overall market conditions, the potential for E&P budget exhaustion and the outlook for the second half of 2019 and into 2020,” Hi-Crush CEO Bob Rasmus said during the quarterly conference call.

“Based on those discussions, we could see potential for a modest decline in activity late in the third quarter. In response, we are taking steps to further lower our cost structure and increase efficiency.”

Houston-based Hi-Crush “will control what we can control,” Rasmus said. North American unconventional development “is not going away,” and sand is vital to complete unconventional wells.

“The fundamental landscape for our market is strong, growing and rooted in factors supportive of our business and our strategy.”

Still, there are questions about when the market may come into balance.

Sand demand for fracturing services is seen increasing over the long-term, “but there’s unlikely to be new sand supply or last-mile services added to the market,” Rasmus told analysts. The “rationalization of supply,” while slow, has already begun.

“We have already seen supply being idled and shut down both in-basin and northern white sand. Single product or single service providers have struggled to meet multifaceted customer demands, and we have seen sand producers declare bankruptcy,” notably Emerge Energy Services LP.

“Others have turned their priorities away” from using sand, according to Rasmus. “The contraction has begun, but consolidation of the industry could be a slow process, and the competitive landscape won’t change overnight.”

Hi-Crush sand sales volumes came in at the high end of the guided range totaling 2.66 million tons, a 10% sequential increase, on stronger sales for both northern white sand and sand sold through its logistics and well-site operations business Pronghorn Energy Services.

Sand volumes sold directly to E&Ps during the second quarter increased to a company record of 66%, compared to 63% sequentially and 31% in the year-ago period.

Volumes sold at the wellsite through the logistics and wellsite operations business increased by 28% from 1Q2019, another company record, which resulted from improved utilization of last-mile crews during the quarter, Rasmus said.

At the end of June, Hi-Crush had 21 last-mile crews operating across Lower 48 basins, versus 13 at the end of March.

The average sales price for the second quarter was $47/ton, flat from the first quarter. Total revenues increased to $178 million, an 11% sequential increase.

In the third quarter, sand sales volumes are expected to total 2.4-2.7 million tons, aligned with “flat to potentially declining completions activity,” CFO Laura Fulton said. “We are moderating certain activities to minimize costs in our northern white production facilities in response to these market conditions,” while wet sand inventories are increasing at all operating locations.

At the end of May, the company also completed its conversion to a C-Corp and began trading as “Hi-Crush Inc.” under a simplified corporate structure.

U.S. Silica, headquartered in Katy west of Houston, reported selling a record 3.9 million tons of sand during the second quarter to its oil and gas customers, up 2% sequentially. The operator continued to ramp up its new West Texas sand capacity in the Permian Basin and exited June at a 7.2 million ton/year run rate.

The oil and gas contribution margin of $71.5 million was better than expected because of strong performance from SandBox, the last-mile logistics business, as well as a rebound in northern white sand pricing. SandBox delivered a record performance with loads up 14% sequentially. The June exit load volumes hit an all time high, and at the end of the quarter U.S. Silica held around 27% of the market share in delivered sand, according to CEO Bryan Shinn.

“We continued to experience pricing pressure in West Texas during the quarter, which was more than offset by reduced operational costs, some of which may not repeat in the third quarter,” he told analysts during the quarterly call.

“Some analysts have warned recently of potential economic difficulties ahead, but we’ve yet to see any shifts in customer demand that would indicate a slowdown or imminent recession.”

Looking ahead to the third quarter in the oil and gas segment, proppant volumes are expected to increase by about 10% sequentially, “although some softening” is expected in the fourth quarter as E&P budgets “are stretched and activity levels decline.

“There has been further pricing weakness in the Permian Basin, although some of that pressure may be offset by the rebound in northern white sand pricing,” Shinn said. “At the same time, the company’s costs per ton continued to decrease, particularly in West Texas.”

The costs per ton continue to come down, “especially in West Texas,” Shinn said. However, “we do expect to see some softening in the fourth quarter, as oilfield activity levels are anticipated to moderate as producers focus on living within their cash flows.”

During July, the active U.S. fracture spread declined by around 2.5% or nine spreads and had fallen by 6% year-to-date, according to Tudor, Pickering, Holt & Co. “In digging into the spread count trends, we noticed that the 2019 month/month percentage deltas somewhat mirror those seen over the same period in 2018,” which “doesn’t bode well for the pumpers if that relationship holds true in the second half of 2019.”

Evercore ISI analysts said overall the fracture sand subsector “put up a pretty decent quarter,” as volumes were generally in line with guidance, profitability improved on lower costs and there was stabilized pricing. Capital expenditures on average declined by around one-third during the period and “should continue to trend lower” through the rest of the year.

Well completions in North America have nearly recovered to pre-pandemic levels, with hydraulic fracturing jobs reaching a 12-month high in March, according to Rystad Energy. Nowhere are completions climbing faster than in the Permian Basin, analysts said. The data is borne out by the rising rig count in West Texas and southeastern New Mexico. The…