Houston-based Hi-Crush Partners LP, which provides proppant sand for North America onshore operators, on Monday reported a sharp downturn in sales for the fourth quarter and it has subsequently suspended quarterly distributions because of current market conditions. 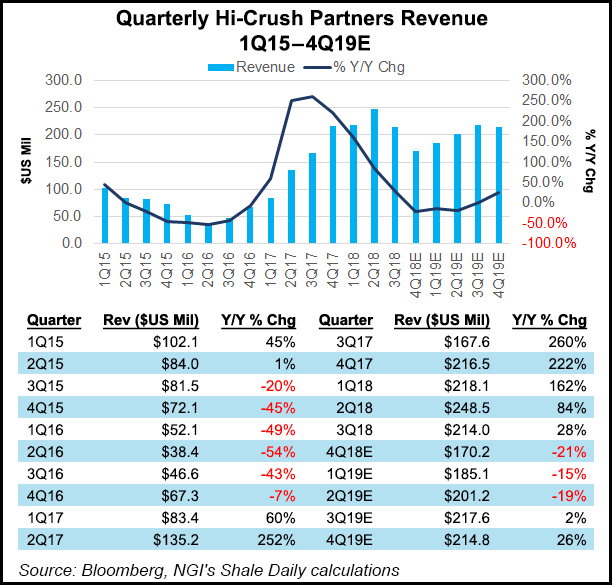 “Well completion activity slowed significantly in the fourth quarter, impacting sales volumes and pricing primarily of northern white sand, and to a lesser extent in-basin sand,” said CEO Robert E. Rasmus. “While sequential weakness was anticipated and well documented across the industry, the level of weakness in completions was greater than previously expected.

“We are proactively analyzing our cost structure and we have made, and will continue to make, whatever decisions are necessary to navigate near-term challenges and best position Hi-Crush for the long-term.”

Volumes sold between July and September were negatively impacted by “greater than expected weakness in completions activity and timing of customer demand,” along with typical seasonal slowdowns.

“Our overall volumes were impacted by the headwinds anticipated during the quarter,” CFO Laura C. Fulton said. “The reduction in completions activity, combined with the timing of work by our customers, resulted in lower than expected sales volumes.”

Volumes sold during December “improved…as we advanced our strategy of selling more volumes to E&Ps, including the execution of additional contracts for northern white sand and our PropStream services.” PropStream is the partnership’s integrated last-mile service, which provides silo and container systems for customers.

Although business fell off in the final quarter, Hi-Crush delivered its first sand volumes from the newly completed second Kermit production facility, which was done on time and under budget, management said.

The 3.0 mmt/year facility is one mile west of the first Kermit facility. Each facility produces a single product, 100 mesh Permian “PearlTM” fracture sand, and all volumes produced from the two facilities are mined from the same reserves. The reserve life for the Kermit complex is estimated to be about 17 years.

“The construction of our second Kermit facility was completed on time and under budget in December and we successfully delivered our first volumes from the facility,” Rasmus said. Combined with an expansion project underway at the Wyeville, WI, facility, the decision to expand production in West Texas and Wisconsin, “supported by contracts from new and existing E&P customers, reflects our strategy of partnering with operators to meet their individual needs…

“We expect the Kermit complex to ramp quickly to reach its combined annual nameplate capacity of 6.0 mmt in March, supported by contracts with operators for approximately 85% of its capacity. Our previously announced expansion of the Wyeville facility is fully supported by customer commitments and is on schedule for completion in mid-first quarter of 2019.”

The partnership also announced contracts with E&Ps for northern white sand and PropStream services beginning in 1Q2019. The E&P contracts support about half of currently operating northern white fracture sand production capacity and commit additional PropStream systems and crews “primarily in the Northeast with leading operators in the region.”

Hi-Crush also has executed “pricing amendments” in some of its sand supply agreements that support the Kermit complex.

“We are excited to deepen relationships with operators that value our reliability, safety record and integrated last mile services,” Rasmus said. “At the same time, we remain in active discussions with our customers, particularly around the fixed-prices defined in our in-basin sand agreements.”

The in-basin sand contract amendments were negotiated “with a focus on trading value for value and further strengthening the long-term relationships we target with our operator customers,” He said. With this strategic orientation, and as a result of these negotiations, we have secured the use of additional PropStream crews and equipment, increased volume commitments and extended terms on the contracts.”

“Customer demand for our FB silos has been robust and feedback on these systems and our team’s execution has been tremendously positive,” Rasmus said. “Customers are increasingly focused on the last-mile value proposition, and against this backdrop we have explored several ways in which we can utilize the new FB silo service offering to improve efficiencies and deliver further value to our customers…

“We are committed to fundamentally extending our business beyond the mine, including an increasing concentration on the logistics of frac sand, and serving customers through unique, value added solutions.”

The board’s decision to suspend quarterly distributions follows Hi-Crush’s previous cash distribution of .225 cent/unit on all common units for 3Q2018, or 90 cents/unit on an annualized basis, which was paid in November.

“As a result of the challenging conditions experienced in the fourth quarter, the board of directors made the decision to suspend the quarterly distribution, which reflects our commitment to financial discipline and maintaining a strong balance sheet,” said Fulton. “Our balance sheet is well positioned for the challenges facing the industry, supported by our financial structure with no maintenance covenants, and enhanced by the board’s decision to further protect our capital position.

“With $114 million of cash as of year-end and no borrowings under our asset-backed facility, we have more than sufficient funding for our semi-annual interest payments, our 2019 maintenance capex and remaining growth capital expenditures from our 2018 expansion projects.”

The management team thinks that the “market dynamics that coalesced in the fourth quarter are transitory,” Rasmus said. “We anticipate improving activity in 2019 as E&Ps focus a larger share of their capital budgets on completions and additional takeaway capacity in the Permian Basin becomes available, but the pace of improvement remains uncertain.

“Supply and demand dynamics for fracture sand should also improve as more capacity is shut down, construction of new in-basin supply slows, and demand fundamentals continue to strengthen. Overall, some headwinds may prove more persistent than previously anticipated, continuing the challenging environment for northern white sand…”

“We are focused on improving our cost structure from the mine to the last mile, and on establishing and deepening relationships with operators,” she said. “Our balance sheet remains strong and our financial position and operational priorities are well-aligned to support success in 2019 and over the long-term.”

The downturn in U.S. sand demand is reflected in new research by Rystad Energy, which on Monday noted that U.S. hydraulic fracturing activity peaked from April to August then slid into November. Preliminary data indicated that fracturing activity “likely dropped to 44 jobs/day” during November.

“We conclude that nationwide fracturing activity was mostly stable from April 2018 to August 2018 at an average daily level of between 48 and 50 fracked wells,” said Rystad senior analyst Lai Lou. “However, the fracturing rate has slipped to a range of between 44 and 46 for the period of September to November 2018.

“After reaching a peak in May/June, fracking activity in the Permian Basin has gradually decelerated throughout the second half of 2018.”

Preliminary data for November shows evidence “that seasonal activity deceleration has likely started in all major plays except Eagle Ford,” Lou said. “There has been a considerable slowdown in Bakken and Niobrara in November, our analysis shows.”

Still, some major Permian operators appear to be bucking the general slowdown. ExxonMobil Corp., considered one of the largest Permian explorers “experienced a strong uptick in October, making it one of the months with the highest number of fractured wells in the second half of 2018,” according to Rystad. Likewise, Energen Corp. was not affected by the slowdown before its formal acquisition by Diamondback Energy Inc. in November.

“In general, many of the key operators have exhibited a largely flat trend from June to October 2018, which implies that the market-wide deceleration in fracturing activity has a more significant implication for small companies in contrast to the major players in the Permian,” Lou said. October and November are still exposed to some underreporting.

“Based on the latest reporting, the reduction in the collective number of jobs for the top 10 operators is around 10% from June to October, while the corresponding percentage for the remaining operators is as high as 48%.”