Houston-based Hi-Crush Partners LP unveiled a triple shot of expansions on Monday, with the takeover of a Manitoba-based silo-based sand storage business and build out of proppant operations in Wisconsin and the Permian Basin. 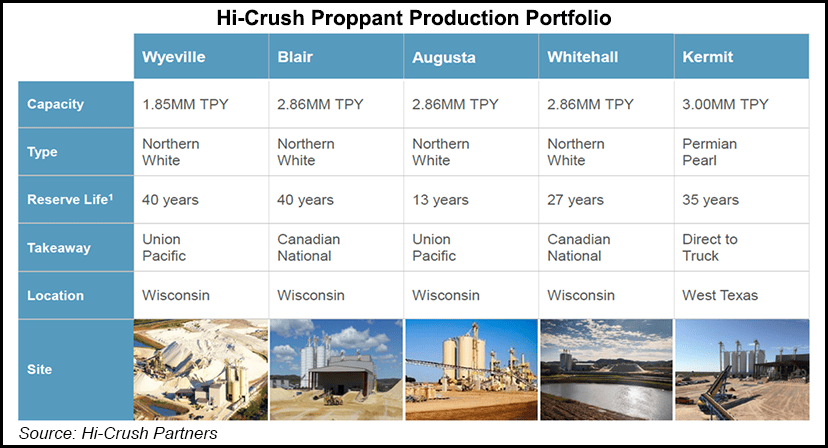 Hi-Crush agreed to pay $60 million initially to buy Canada’s FB Industries Inc., founded in 2008, which makes silo system solutions to store and manage fracture (frack) sand and other aggregates. The operator has also amended an existing services agreement that would support, through reservation commitments, an 850,000 ton/year expansion of the Wyeville, WI, facility and anchor a 3.0 million tons/year sand mine in West Texas.

“Our announcements…touch all aspects of our ”mine, move, manage’ operating strategy, further diversify our business and elevate Hi-Crush’s position as an industry-leader in the growing market for frack sand and its delivery,” said CEO Robert E. Rasmus. “At a critical time in our industry’s evolution, customers are seeking more integrated relationships with suppliers capable of delivering their full range of frack sand and logistics needs.”

Once the acquisition and development projects are completed, Hi-Crush would have an estimated 17.3 million tons/year of nameplate frack sand capacity, Rasmus said.

“We continue to expect demand for frack sand to grow to over 110 million tons in 2018, with expectations for 2019 demand to be even higher,” said CFO Laura C. Fulton. “The tightness in reliable sand supply, resulting from this significant demand growth, as well as delays in our competitors’ announced construction projects, puts an even greater emphasis on the need for a fully integrated frack sand supply and logistics provider.”

Hi-Crush, through two of its subsidiaries, agreed initially to pay FB $45 million in cash and issue about $15 million of new common units. There also is the potential for additional payments “based on the achievement of established performance benchmarks through 2021,” management noted. The transaction is set to close by the end of September.

FB’s silo storage systems are capable of storing 1,680 tons of proppant, which minimizes pad size and footprint requirements while enabling mobile forward-placement of proppant inventory. The FB system also offers a fully enclosed top-fill conveyor system, which enables proppant to be transported and loaded via belly-dump trucks, eliminating the need for pneumatic trucks.

As a result of the FB transaction, Hi-Crush would also gain access to several lines of complementary logistics equipment solutions applicable to wellsite proppant delivery, with the potential to service other industries and products.

“We are planning a strong ramp in the deployment of FB systems in 2018 with expectations of 15-20 systems deployed by year’s end,” Fulton said.

Driven by the growing demand for frack sand and increasing requirements of its customers, Hi-Crush has also amended an existing supply agreement with a Permian Basin exploration and production (E&P) customer, with plans to provide northern white and in-basin sand, as well as to expand PropStream services.

To support the northern white sand component of the amended agreement, Hi-Crush plans to expand fine mesh production capacity at its Wyeville facility, nearly all of which is supported by reservation commitments. Following the expansion, set to be completed in early 2019, nameplate capacity would increase to 2.7 million tons/year.

In support of the in-basin Permian component of the amended agreement, Hi-Crush is now building a second sand mine in Kermit, TX, in Winkler County, to add 3.0 million tons/year of capacity.

Hi-Crush is also in “advanced negotiations with existing and potential customers, and expects to be more than 75% contracted upon start-up,” management said. The new Kermit facility would be one mile west of the existing plant and produce 100 mesh Permian Pearl frack sand. The plant is expected to be in-service before the end of the year.

“This agreement and our focus on large, stable E&P customers, who are transitioning to manufacturing mode for their well completion programs, provide Hi-Crush with clear visibility to the future demand for sand and our logistics services,” said Fulton. “We believe concern regarding takeaway capacity in the Permian is a transitory issue that may have varying impacts on operators, and any temporary slowdown in growth of Permian production is likely to come in the form of an increase in drilled but uncompleted wells which will benefit the sand industry for years to come.”

Hi-Crush also provided preliminary 2Q2018 results, estimating sales volumes totaled 3.037 million tons. Revenues are expected to be $247-249.5 million, with net income to be within a range of $66.5 million to $69 million.

The partnership now expects total capital expenditures for 2018 to be $180-210 million, versus a previous estimate of $35-45 million, driven by development and construction of the second Kermit facility, equipment builds to further expand market penetration of the FB silo solution, expanding the Wyeville facility, and further growth in PropStream and other logistics initiatives.

Analysts appeared enthused by the expansions and the tentative quarterly results.

Evercore ISI analyst Samantha Hoh said the announcements emphasize confidence that Hi-Crush management has in the “strength and duration of the North American pressure pumping cycle.”

The new in-basin supply for the Permian comes after the Kermit 1 facility began loading trucks two months ahead of schedule and already is more than 90% contracted, Hoh noted, “despite ongoing market concern about new in-basin supply and its impact on northern white demand and pricing…”