Hess Corp. executives see the Bakken Shale continuing to drive significant cash flow for almost another decade, despite a moratorium on federal oil and natural gas leasing by the Biden administration. 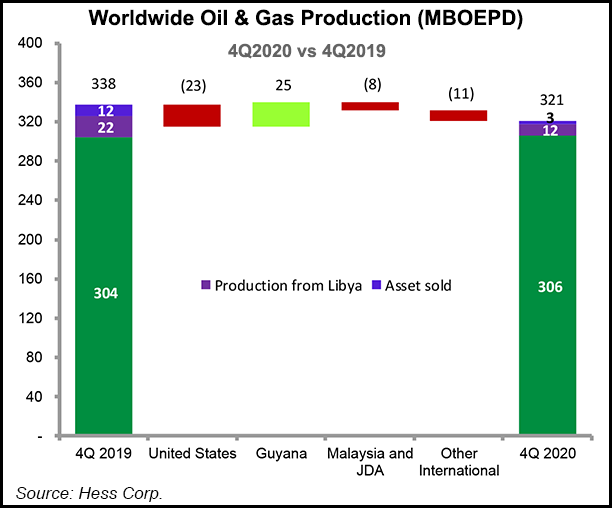 CEO John Hess told investors on Wednesday only 2% of the company’s Bakken acreage is on federal lands. The exploration and production (E&P) company is set to double the number of rigs operating in the North Dakota play to two by the end of March and ultimately would “like to get the rig count to four,” he said on the fourth quarter 2020 earnings call.

“By getting the rig count to four, we not only generate a significant amount of cash flow, but will also be able to hold production in the Bakken broadly flat at around 200,000 boe/d for almost 10 years,” the CEO said.

The company chief said there are 1,800 well locations left in the Bakken that, at current prices, generate “very high returns.” The E&P plans to bring 45 wells online in North Dakota this year at an internal rate of return of 95%. This program, he said, is “similar to last year” in that the initial production (IP) of wells for 180 days is expected to be the same — “120,000 bbl of oil…very good wells.” The E&P has another 50 wells that “are in those very high returns” that it wants to develop.

The role of the Bakken in the portfolio is to be a cash generator, according to the CEO, so the rate at which Hess invests in the play “will be a function of corporate cash flow needs. But you can see the pent-up potential in the Bakken is very large, with some very good return opportunity.”

For 2021, the focus is to further reduce natural gas flaring in the region. Although already well below the 9% threshold required by North Dakota, the plan is to increase gathering to reduce flaring even further. Adding infrastructure is being considered with Hess Midstream LP, according to Chief Operating Officer Greg Hill.

On the oil side, the company is expected to continue lowering the number of wells it brings online in the Bakken. Twenty-two wells came online in 3Q2020, with 12 in the final three months of the year. Plans are to bring only four wells online by the end of March.

“Naturally, you’re going to get some oil decline associated with that,” Hill said. “However, once that second rig kicks in, which you really see the effects of in the second half of the year, that’s when oil will begin to stabilize and be flat from then on,” at around 175,000 b/d for “a number of years.”

Meanwhile, Hess in December agreed to sell two cargoes that were stored on very large crude carriers (VLCC) earlier last year. The producer chartered the VLCCs to transport and store a total of 6.3 million bbl of Bakken crude in 2Q2020 and 3Q2020 for sale in Asian markets. The first VLCC cargo of 2.1 million bbl was sold in September.

Despite the lack of activity in the GOM, the deepwater remains a “very important cash engine…as well as a platform for future growth,” Hill said.

Addressing President Biden’s pause on federal oil and gas leasing announced Wednesday, the CEO said the administration has to be not only “climate literate, but energy literate.” The administration has to realize that oil and gas are “a strategic engine for the U.S. economy, especially at a time that we’re trying to recover the economy from Covid.”

“Hopefully, as the administration moves forward, they will extend a hand as well. We need to find common ground to make sure we do everything we can to address climate change, but also that oil and gas play a key role in the economy’s recovery.”