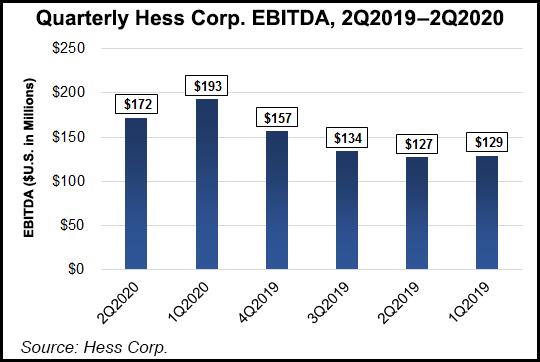 The New York City-based independent attributed the performance to increased wells online and improved well performance. Total second quarter production from the Bakken came in above initial guidance of 185,000 boe/d.

Meanwhile, Hess reduced its Bakken rig count in the Bakken from six to one.

“Operating one rig allows us to maintain key operating capabilities that we have worked hard to build over the years both within Hess and among our primary drilling and completion contractors,” CFO Gregory Hill said during an earnings call.

The company reduced its capital and exploratory budget for 2020 by 37% to $1.9 billion, the “majority of which” was accounted for by the reduced Bakken rig count.

Executives also reaffirmed their commitment to their assets offshore Guayana during the call, where 16 “significant” discoveries since 2015 have been made on the Stabroek Block with partner ExxonMobil, which operates the block.

“In terms of preserving the long-term value of our assets, our top priority is Guyana, an extraordinary world-class asset,” CEO John Hess said. “The current estimate of gross discovered recoverable resources for the block stands at more than 8 billion boe, with multi-billion barrels of exploration remaining.”

In June, Hess resumed a four-rig drilling operation on the block with two rigs focused on development wells and two on exploration and appraisal activities.

During the second quarter, capital and exploratory expenditures were $453 million, compared with $664 million a year ago.

Bakken net production guidance has increased to 185,000 boe/d from the previous guidance of 175,000 boe/d. Executives credited the stronger Bakken output to the year-to-date performance and the deferral of a planned maintenance turnaround at the Tioga Gas Plant that began this month and continues until 2021.