U.S. independent Hess Corp. said Wednesday it was moving forward with plans to ramp up drilling activity in the Bakken Shale amid continued commodity price strength. 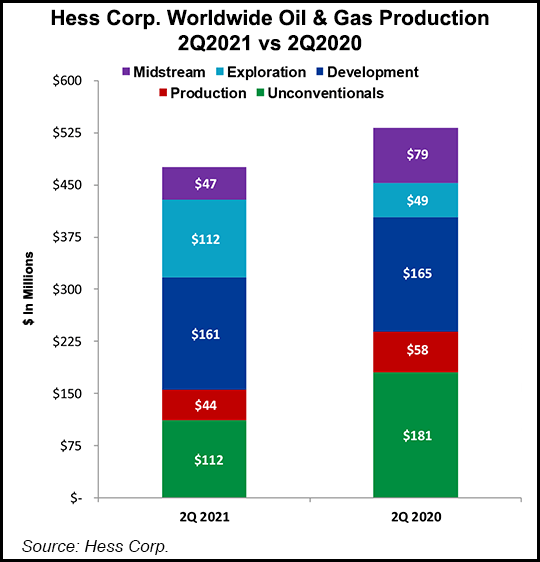 Hess plans to add a third rig in the Bakken in September, something it previously said it would consider if oil prices continued to improve.

“We have been operating two rigs since February, but given the improvement in oil prices and our robust inventory of high return drilling locations, we plan to add a third rig in September,” COO Greg Hill said on the 2Q2021 earnings call. “Moving to a three-rig program will allow us to grow cash flow and production, better optimize our in-basin infrastructure and drive further reductions in our unit cash costs.”

However, “those wells come on right at the end of the year,” Hill said. “So the impact of that will be seen in 2022’s volumes.”

Potential Fourth Rig ‘Would Be Last’

Hill also said the company is continuing to consider adding a fourth rig to the Bakken at the end of next year if prices stay strong. However, no more rigs would be added beyond that.

“I will say the fourth rig would be the last rig,” Hill said. He added that at that level, Hess could maintain Bakken production at 200,000 boe/d for nearly a decade.

Furthermore, any decision to add rigs in the Bakken “is going to be driven by returns and corporate cash flow needs,” he said.

Hess produced 159,000 boe/d from the Bakken in 2Q2021 compared to 194,000 boe/d in the same period one year ago. The decline was because of lower drilling activity as Hess went from five rigs to one in the play when oil prices cratered and the Covid-19 pandemic weighed on demand.

Still, the latest production numbers were better than expected, as Hess had forecast 155,000 boe/d. Hill said the higher output primarily reflected increased gas capture, “which has allowed us to drive flaring to under 5%, well below the state’s 9% limit.”

In the Bakken, the company drilled 17 wells and brought nine new wells online during the quarter. In the third quarter, it expects to drill 15 new wells and bring 20 online.

CFO John Rielly said the third Bakken rig was not included in the company’s initial $450 million capital guidance. However, lower-than-expected spending at the Guyana operations are expected to offset the extra cost. Because of that, Hess is maintaining its $1.9 billion overall capital spending guidance for 2021.

Hess also reported Gulf of Mexico production of 52,000 boe/d compared with 68,000 boe/d in the prior-year quarter. The decrease was primarily attributed to the sale of its stakes in the BP plc-operated Shenzi field in 4Q2020. However, Hess saw an increase in its share of production from the Liza field offshore Guyana. Hess reported an average 26,000 b/d of oil output from the field compared to 22,000 b/d one year ago.

Hess holds a 30% interest in the Stabroek block where the field is located, while ExxonMobil holds 45% and is operator. CEO John Hess said the Guyana development is “key” to the company’s long-term strategy.

Shale In Oil Recovery’s ‘Back Seat’

When asked about the road to recovery following the volatile pandemic year, the CEO said there were positive signs that the oil market was rebalancing. The company estimates current global demand at 98 million b/d, compared to 100 million b/d pre-pandemic.I

“I think demand is well supported with the people getting back to work, mobility data in the United States, certainly jet fuel is almost at pre-Covid levels of demand,” he said. “So demand is pretty strong.”

However, he does not expect shale production to see the growth levels it saw in the past.

“You look at shale and it is no longer the swing supplier,” the company chief said. “It’s gone from a business that’s focused on production growth to one that’s focused on return of capital, financial discipline.”

“But shale will not be growing at the level that it was growing at the last five years,” he said. Producers may face a tough environment in the coming years for getting production back up to pre-pandemic levels of 13 million b/d.

“So shale will play a role. But it’s going to have a back seat in terms of being the swing supplier going forward,” he said.