U.S. independent Hess Corp. expects to add a fourth rig to its Bakken Shale activity by the end of this year, but the company continues to prioritize capital discipline. 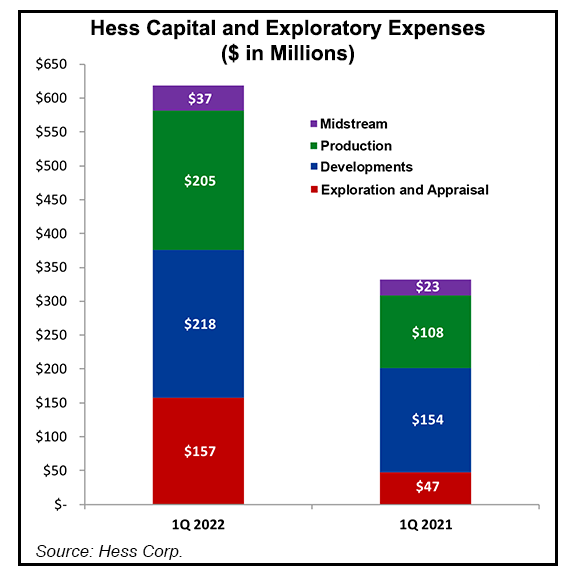 “As our portfolio becomes increasingly free cash flow positive in the coming years we commit to return up to 75% of our annual free cash flow to shareholders, with the remainder going to strengthen the balance sheet by increasing our cash position or further reducing our debt,” CEO John Hess said in an earnings call Wednesday.

Given the strength of the oil market and the world’s need for more supply, he said the company “will give serious consideration to adding a fourth rig later this year” in the Bakken.

Bakken net production was 152,000 boe/d in the first three months of this year, down from 158,000 boe/d in the year-ago period. The decline in output was attributed to winter storms, executives said.

Hess drilled 19 wells and brought 30 new wells online in the Bakken during the quarter. In the second quarter, the company aims to drill 22 wells and to bring about 18 online.

Because of operational issues related to winter weather, Bakken net production for this year is forecast to be near the bottom of the company’s previous guidance range of 160,000-165,000 boe/d. Production is expected to reach 175,000-180,000 boe/d during the fourth quarter.

COO Greg Hill said Hess expects additional cost inflation of 3-4% on the 2022 capital program, including higher drilling and completion costs in the Bakken. Bakken wells are now expected to average $6.2 million/well or 7% above last year’s costs.

A fourth rig in the Bakken could cost an additional $100 million and inflation could add $80-100 million in costs this year, executives said.

Global capital and exploratory expenditures were $580 million in the first quarter, compared with $309 million in the prior-year quarter. The bulk was directed to the Bakken and to Guyana, where Hess holds a 30% interest in the Stabroek block.

The CEO said Guyana was “key to our strategy.” Led by ExxonMobil, the Guyana project continues to yield a slew of discoveries. The asset is “positioned to be one of the highest margin, lowest carbon intensity oil developments globally,” he said.

Gross discovered recoverable resource estimates in the Stabroek block now are above 10 billion boe. In Guyana’s offshore, Hess sold 2.3 million bbl of oil during the first quarter. By 2026 or 2027, capacity of 1 million b/d-plus in Guyana is “a conservative number,” executives said.

Net production to Hess, excluding its Libya assets, was 276,000 boe/d in the first quarter, compared with 315,000 boe/d in the year-ago quarter. The drop was primarily because of field decline and unplanned downtime in the Gulf of Mexico.

Across its assets, the company “can deliver highly profitable production growth of more than 10% annually over the next five years,” Hess told analysts.