Hess Corp. has set a $3.7 billion exploration and production budget for 2023, with more than 80% of funds allocated to its flagship Bakken Shale and Guyana operations. This would be up from the $2.7 billion budget for full-year 2022 that the firm forecasted in October. 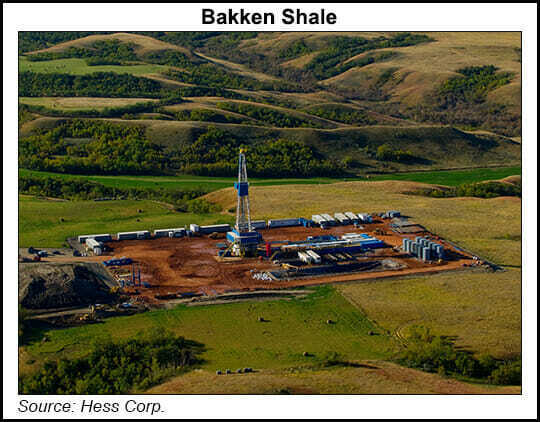 “Our capital program reflects continued execution of our strategy to invest only in high return, low cost opportunities within our portfolio,” CEO John Hess said. “More than 80% of our 2023 budget is allocated to Guyana, which is positioned to be one of the highest margin, lowest carbon intensity oil developments in the world, and to the Bakken, our largest operated asset where we have a robust inventory of high return future drilling locations.”

COO Greg Hill added, “In the Bakken, we plan to operate a four rig program, which will enable us to maximize free cash flow generation, optimize our in-basin infrastructure and drive further reductions in our unit cash costs. In Guyana, our focus in 2023 will be on advancing our high value oil developments and continuing an active exploration and appraisal program on the Stabroek Block.”

As the Bakken matures and three-mile laterals become more prevalent, operators there now are increasingly targeting second and third-tier acreage, according to North Dakota’s top oil and gas regulator. About half the active drilling rigs in the state are now outside the core Bakken, said the Department of Mineral Resources’ Lynn Helms, oil and gas division director, earlier this month.

The production portion includes $1.1 billion to fund the four-rig Bakken program. Hess is planning to drill about 110 gross operated wells in the onshore play and bring online about 110 wells in 2023. “Funds are also included for investment in nonoperated wells,” management said.

Another $125 million is earmarked for production activities in the Gulf of Mexico (GOM), including drilling two tieback wells and seismic acquisition and processing, Hess said.

The $1.7 billion Guyana portion of the budget includes $1.21 billion for developments on the Stabroek block at the Payara, Yellowtail and Uaru fields.

Hess also has earmarked $150 million for its Gas to Energy project in Guyana, with first gas expected by the end of 2024, management said. Another $250 million would primarily go toward front end engineering and design work for future development phases on Stabroek.

“Funds are also included for seismic acquisition and processing in Guyana, Suriname and the deepwater Gulf of Mexico,” management said.

Hess is scheduled to hold its fourth-quarter and full-year 2022 earnings call on Wednesday, Jan. 25.