Continuing it’s transformation into a pure-play oil and natural gas exploration and production company, Hess Corp. has filed a Form 10 Registration Statement with the U.S. Securities and Exchange Commission (SEC) for the formation of Hess Retail Corp., a subsidiary containing convenience stores and gasoline refueling stations that the New York-based energy company said it will then seek to sell. 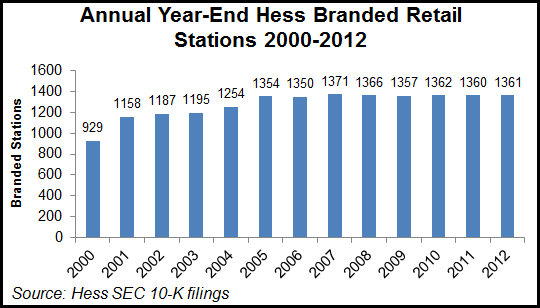 Hess said it has received a ruling from the Internal Revenue Service that will allow it to distribute the business to stockholders in a tax-free spin-off. Hess shareholders would receive one share in the retail company for each Hess share held, according to the filing.

Hess Retail is the largest operator of convenience stores along the East Coast and the fifth largest in the United States by number of company operated sites, according to the filing. Operations include the sale of motor fuel and convenience store offerings. “We primarily operate our sites on the East Coast in densely populated areas with above average fuel margins and household incomes that are greater than the national average under the Hess, Hess Express and Wilco Travel Plaza brands,” the company said in its Form 10.

But Hess hasn’t grown its retail gas station presence for several years. The company had 1,361 branded retail stations in 2012, just seven more than it had in 2005, according to SEC filings.

The filing comes less than six months after Hess agreed to sell its New Jersey-based energy marketing business to Direct Energy Business for $731 million in cash and approximately $300 million in net working capital (see Daily GPI, July 31, 2013). For Hess, the deal was part of a previously announced plan to exit the entirety of its downstream business so that it can focus on oil and gas exploration and production (see Daily GPI, March 5, 2013).

Hess spent the first few months of 2013 engaged in a proxy battle with Elliott Management Corp., its second-largest shareholder, which pushed for an overhaul of the company (see Daily GPI, March 27, 2013). In the end, Hess agreed to appoint three Elliott-backed nominees to its board of directors, and the activist hedge fund, which had claimed that the company was mismanaged and controlled by Hess family interests, agreed to support five Hess nominees (see Daily GPI, May 17, 2013). Elliott also led a charge to split the chairman and CEO roles, and it forced the company to sell its downstream arm and monetize Bakken Shale midstream assets.