Hess Corp. said net production from its acreage in the Bakken Shale increased substantially in the third quarter, and it expects the full-year 2020 total to exceed year-earlier levels as the company weathers the pandemic’s demand shocks. 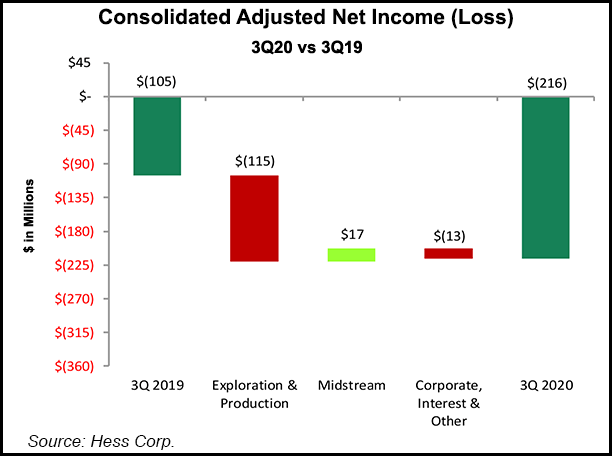 The New York City-based independent said Wednesday Bakken net production rose 21% from a year earlier to 198,000 boe/d. That was above guidance of around 185,000 boe/d. The company cited increased wells online and improved well performance.

The company continues to focus on efficiencies as well. In the third quarter, average drilling and completion (D&C) cost per well in the Bakken declined to $5.9 million, from $6 million the previous quarter and $6.2 million for the first quarter.

“Through the continued application of technology and lean manufacturing techniques, we expect to reduce our D&C costs even further,” Chief Operating Officer Greg Hill told analysts during a call to discuss results.

The company’s exploration and production (E&P) capital and exploratory expenditures are expected to total about $400 million in the fourth quarter and $1.8 billion for the full year, down from previous guidance of $1.9 billion.

CEO John Hess noted that, since the start of the year, the company that bears his name has reduced its capital and exploratory budget by 40%, primarily by reducing its Bakken rig count from six to one.

“Our plan is to remain at one rig” until West Texas Intermediate (WTI) prices approach $50/bbl, he said.

A crude price war between Russia and Saudi Arabia earlier this year curbed oil prices. The pandemic followed in March and intensified the headwinds, necessitating expense cuts across the oil industry. After dropping into negative territory earlier this year, WTI prices recovered some ground and currently hover around the $40 level.

At the end of September, Hess had $1.28 billion of cash, a $3.5 billion undrawn revolving credit facility and no debt maturities due until 2023.

The company also has operations in the Gulf of Mexico, Southeast Asia, Libya and Guyana, with a heightened emphasis on the latter. Executives reaffirmed their commitment to assets offshore Guyana, where 18 significant discoveries were made in recent years on the Stabroek Block with partner ExxonMobil, which operates the block. The total includes two discoveries announced in September.

“In terms of preserving the long-term value of our assets, Guyana – with its low cost of supply and industry-leading financial returns – remains our top priority,” the CEO said.

The company in June resumed a four-rig drilling operation on the block with two rigs focused on development wells and two on exploration and appraisal activities.

At the end of September, the government of Guyana approved the development plan for the Payara Field, the third oil development on the Stabroek Block, where Hess has a 30% interest.  “Payara is targeted for first oil in 2024” with expectations for it producing more than 750,000 gross b/d by 2026, according to the CEO.

“The three sanctioned oil developments – Liza 1, which is producing, and Liza 2 and Payara, which are in construction – have breakeven Brent oil prices of between $25 and $35/bbl, which are world class by any measure,” he added.

The CEO said oil and gas would continue to play prominent roles in meeting global energy needs for decades.

“The energy transition will take time and major breakthroughs in technology will be needed,” he said. “While we need policies to encourage renewable energy to battle climate change, oil and gas will be needed for many decades to come and will continue to be fundamental to world economic growth and human prosperity.”