U.S. independent Hess Corp. has added a third rig in the Bakken Shale and may consider a fourth next year amid continued commodity price strength. 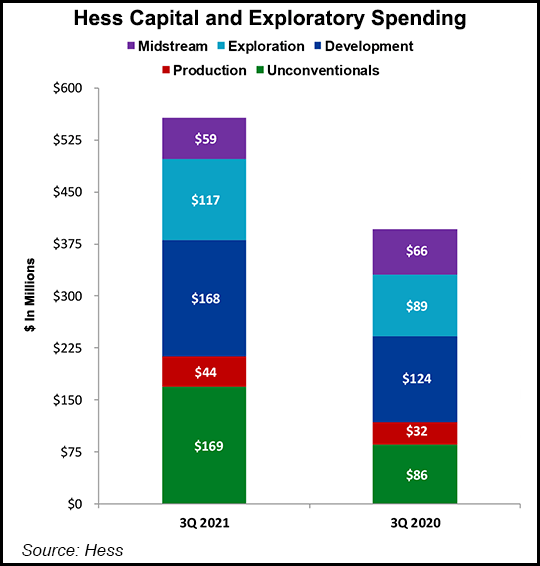 The New York-based producer is ramping up Bakken activity after curtailments last year from the coronavirus. Net production from the Bakken was 148,000 boe/d in the third quarter compared with 198,000 boe/d in the prior-year quarter.

“The Bakken is expected to generate significant free cash flow in the years ahead,” CEO John Hess said Wednesday during a quarterly earnings call. The company is “positioned to deliver strong and durable cash flow growth through the end of the decade based upon the most recent sell-side consensus estimates.”

During the third quarter, Hess drilled 18 Bakken wells, completed 22 more and brought 19 online. Executives said the “ultimate objective” was to get Bakken production back up to 200,000 boe/d.

While calling climate change “the greatest scientific undertaking of the 21st century,” the CEO said the world was underinvesting in hydrocarbons. He said $400 billion/year in oil and gas investment was needed globally over the next 10 years to ensure an “orderly” energy transition.

“We need to have climate literacy, energy literacy and economic literacy,” Hess said. “Our strategy is to grow our resource base and have a low cost of supply and sustain cash flow growth while delivering industry leading, environmental social and governance performance.”

In Guyana’s offshore Stabroek block, where Hess is a 30% partner with operator ExxonMobil, three discoveries were announced during the quarter. Gross discovered recoverable resource estimates in the Stabroek block now are about 10 billion boe, according to ExxonMobil.

While the Bakken is a “cash engine,” Guyana is the “growth engine,” the CEO said. It is “one of the industry’s best investments.”

Overall exploration and production capital and exploratory expenditures were $498 million compared with year-ago spending of $331 million.