Hess Corp., which is facing a shareholder revolt for a perceived lack of focus and crony-heavy board, on Monday said it would become a pure-play exploration and production (E&P) company. The plan involves fully exiting the downstream business, selling Bakken Shale midstream, and bringing aboard six new independent directors. 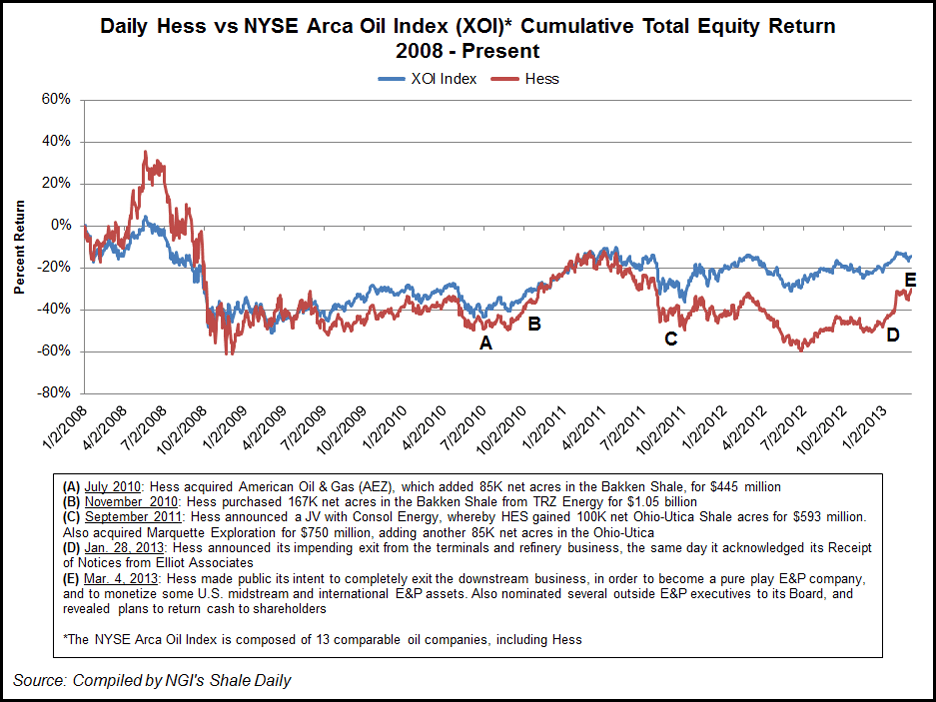 No plans are in the works to spin off its Bakken Shale unit, which had been recommended by Elliott Associates LP, a hedge fund with a 4% stake in the company (see Shale Daily, Jan. 30).

The company in January announced that it would sell its refining and terminals business to focus on E&P (see Shale Daily, Jan. 29). Shortly thereafter CEO John Hess told analysts that the unconventional assets in the Bakken (750,000 net acres) Eagle Ford (45,000 net) and Utica (200,000 net) shales were not for sale (see Shale Daily, Feb. 4).

The backbone of the U.S. business will be built around the Bakken, he told analysts during a conference call on Monday.

“By 2014, Hess will be a pure play E&P company with a tremendous portfolio comprised of higher growth, lower risk assets,” he said. “We believe we will have the financial flexibility to pursue this growth at the same time that we increase current returns to shareholders and generate significant future value.”

Many of the items were laid out in a letter to shareholders in which the company directly criticized Elliott and its leader Paul Singer. The shareholder’s recommendations are “flawed, irrelevant and undermine real value creation,” the Hess letter stated. “We think Singer’s proposals demonstrate no meaningful operational insight into our business…If Singer had taken the time to do his homework and meet with management prior to launching his campaign, however, he might have understood that we were already well down our transformation path to build more value.”

To keep its exploration projects more focused, Hess among other things plans to “monetize” its Bakken Shale midstream properties by 2015, which include stakes in the Tioga Gas Processing plant and a crude oil rail terminal (see Shale Daily, June 24, 2011). Together those assets are valued at $2-2.5 billion. Hess also plans to prune some of its international portfolio and return more capital directly to shareholders.

Elliott is “on board” with the makeover, he said. During the conference call, analysts asked why the turnaround was so long in the making. Some quizzed the management team about Elliott’s demands. The CEO said the transformation had begun long before the shareholder protest.

“It predominantly began when we started to build in the Bakken in 2010,” Hess said (see Shale Daily, Nov. 24, 2010). “It’s not just something that happened overnight and as a response of an activist. Elliott got on the train before it left the station…It’s a natural culmination…”

Among other things Hess plans to:

“Starting in 2010, we began taking decisive actions to grow the value of our world-class asset base by focusing on the exploration and development of our most promising lower risk, higher growth, oil linked E&P assets,” said the CEO.

“In the first phase of our transformation, we invested significantly in our most promising assets, substantially increasing our leadership in the Bakken oil shale, and entering the Utica Shale, while acquiring an additional ownership stake in the Valhall Field (Norway),” the letter stated. The first phase included closing a joint venture refinery project in the U.S. Virgin Islands and paring its portfolio in Europe and Indonesia.

The second phase of the transformation was launched last summer, the CEO told analysts. Since July, he noted that Hess had sold about $1.5 billion in noncore assets around the world and is planning to sell its Russian subsidiary and its Eagle Ford Shale properties in South Texas. Hess also is selling its terminal network, and it has exited the refinery business with the closure if its Port Reading, NJ, facility.

For 2013 Hess chopped 17% of its upstream capital expenditures (capex) and reduced exploration spending by 29% from 2012 levels. More capex cuts are planned in 2014, said the CEO.

“These actions have positioned the company well to enter this third phase of our transformation…, which will create a pure-play E&P.”

Some of the recommendations are things that Elliott had pushed for. Elliott had recommended four actions to recoup shareholder value: elect five independent directors with oil and gas experience; refocus via divestitures, including a spin-off of the Bakken portfolio and noncore assets; elevate operations to bring a “relentless focus” to reducing costs in U.S. resource plays; and reduce the exploration budget and “credibly commit” to cut spending and farm-outs.

Another criticism by Elliott was that the board failed to align compensation with performance, which it said was “indicative of weak corporate governance.” The cumulative CEO compensation over the past five years “ranks in the 73rd percentile relative to peers, while total shareholder returns over the same five-year period rank in the 20th percentile.”

Part of Elliott’s beef had been with the board, in which only three had actual oil and gas operating experience, including Hess, 58, who also chairs the company.

Hess disregarded all of the recommendations. However, six board members are being replaced, including F. Borden Walker, president of marketing and refining, who retired on Friday. Also stepping down from the board are Gregory Hill, president of worldwide E&P, as well as Nicholas F. Brady, Thomas H. Kean, Frank A. Olson and Sam Nunn.

Elliott had criticized Kean, 77, and Brady, 82, because they are joint executors of the Hess estate and are involved in the Hess Charitable Trust. Nunn, 74, is chairman of CSIS, of which John Hess is a trustee. Olson, 80, is a retired auto rental executive.

“They have been outstanding directors who have served with distinction, and they deserve significant credit for helping to transform Hess,” said the CEO. “The fact that we now possess some of the most attractive oil assets in our industry is, in large part, due to their strategic leadership and commitment to our transformation.”

“Importantly, with these changes, 13 of the 14 board members will be independent,” said Hess. The annual meeting and election is scheduled for May 16.

In reaction, Elliott’s management took credit for motivating the producer, but it concluded that the actions announced aren’t enough.

“While motivated by Elliott’s plan, Hess’s proposal falls dramatically short of what is needed,” Elliott responded. “Hess’s announcement is incomplete and it lacks accountability — we believe significantly greater share price appreciation can be achieved.”