The mantra for a San Antonio, TX-based midstream operator, whose portfolio is increasingly weighted to southern destinations, could well be what’s good for Texas is good for Mexico. 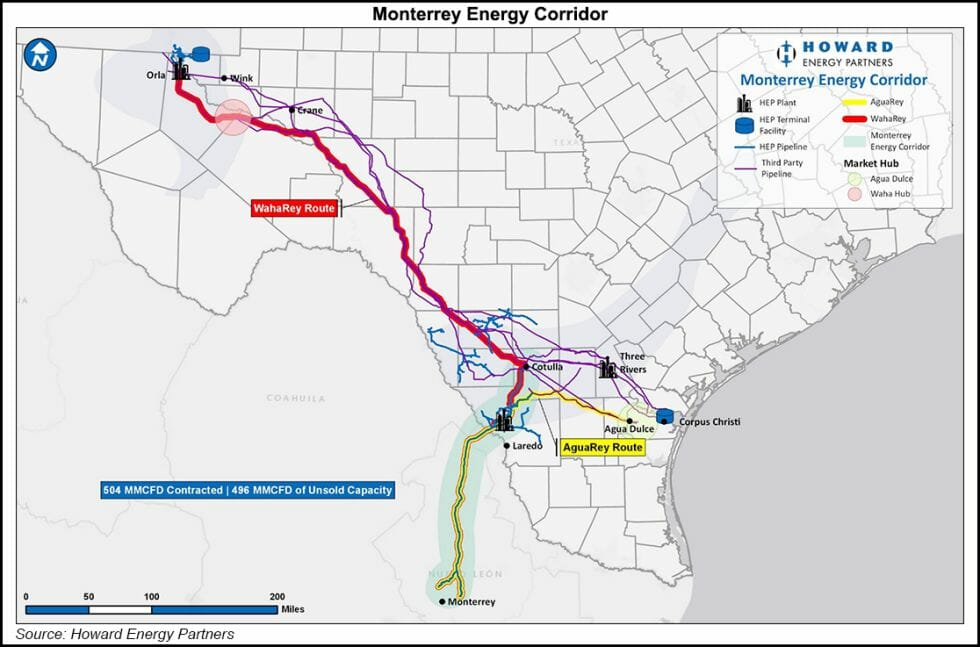 Howard Midstream Energy Partners LLC, aka Howard Energy Partners (HEP), is making inroads in the Lone Star State and across the border as it builds out its multiple systems to carry natural gas and liquids to serve a growing customer base in northern Mexico, i.e. the Monterrey Energy Corridor.

Monterrey, the largest city and capital of the state of Nuevo LeÃ³n, has become an industrialized mecca for projects, something not lost on HEP executives, said President Brandon Seale. He discussed the myriad opportunities with an industry audience at the 4th Mexico Gas Summit held earlier this month in San Antonio.

HEP’s processing and pipeline assets extend from the Permian Basin to South Texas, and east of Houston in Port Arthur, all strategically sited to serve the “end goal,” said Seale, northern Mexico’s “growing appetite for hydrocarbons.”

HEP about seven years ago bought the Maverick Dimmit and Zavala Gathering System, about 344 miles of pipeline in the South Texas counties of Maverick, Dimmit, Zavala and Frio.

Designed for rich and lean gas service, the system gathers for production from the Eagle Ford and Pearsall formations, and interconnects with several big pipelines that move gas in all directions, including south.

“From Day 1, we were selling gas to Mexico,” Seale said. “Mexico was always on our radar. And the funny thing is, if you don’t live and work close to the border, sometimes you look at infrastructure maps and you forget Mexico is there…It just looks like a big white space on the map. But of course, the resources don’t stop at the border and infrastructure doesn’t really stop either…The magnitude of the opportunity was always present in our minds.”

“There’s a huge, huge opportunity there,” Seale said. “The resource is there…with some of the biggest wells ever drilled in the history of the world…Staggering, staggering numbers.”

Around the time the Maverick purchase was made, Mexico was becoming a net hydrocarbon importing country.

“The situation was quite acute on the natural gas side,” Seales noted. The country was suffering from critical power alerts and brownouts, and state-owned Petroleos Mexicanos at times would cut off service to customers with no notice. It was “exceedingly distractive,” he said.

Mexico had to turn to the Pacific markets to buy liquefied natural gas at “exorbitant” prices, when West Texas operators “would have given their left arm to sell gas at $2.50/Mcf. It didn’t make sense…”

A 30-inch diameter pipeline was installed in 2013 to provide a direct connect to a Kinder Morgan Inc. system, which moves gas from Katy, near Houston, southwest to Laredo.

“Our markets were all getting to Mexico,” but they were getting there indirectly, Seales said. “At this point too, our system was basically full…packed to the gills. So we had to find new markets.” Those opportunities led to the the genesis of Nueva Era Pipeline LLC, a cross-border system that ramped up in May.

Nueva Era, a 30-inch diameter system that is designed to carry at least 600 MMcf/d and up to 1 Bcf/d, is a joint venture between HEP and Mexico’s Grupo Clisa to supply Monterrey.

“Basically, if you just looked at the charts, it looked like Mexico’s gas demand was flat,” Seale said. “But if you considered the external factors…the fact that historically, there were all these subsidies” for fuel oil and liquefied petroleum gas and other alternative fuels. “And if you consider that pricing on natural gas had never really been that transparent in Mexico, there were a lot of disincentives for people to use natural gas as a feedstock.

“As the experience in the U.S. in the last 30 years has taught us, if you deregulate the product, if you make it plentiful and if you make it transparent in price and you make it liquid, people will find a lot of ways to use it.”

The United States uses 80-90 Bcf/d of gas, while Mexico uses 8-9 Bcf/d, he said. “Somewhere in there is opportunity.”

“The pipeline is mechanically complete,” Seales said. In mid-June the partnership was “awaiting final regulatory approvals,” to go into full service by the end of the month.

While trucks and rail are adequate to transport oil and liquids, a “pipeline is really the end goal” to transport all energy products, Seale said. With its cross-border system, North America’s energy markets are becoming “truly integrated…

By connecting Monterrey via a pipeline in South Texas, there’s energy integration across “the entire North American network,” allowing a trader to “swap a barrel from New Jersey to Monterrey…That’s pretty remarkable…And we feel like we’re in a unique position because of our experience with cross-border transactions” from working with U.S., Texas and Mexico’s diverse regulatory regimes.”

For HEP, the Texas coastal community of Corpus Christi, which is near Agua Dulce, is an important piece of the puzzle. The port city, already a manufacturing hub for the Gulf of Mexico energy industry, is quickly becoming the go-to destination for oil and petrochemical exports.

In addition, Cheniere Energy Inc. is building a liquefied natural gas export project in Corpus, and newbuild petrochemical facilities, including one led by ExxonMobil Corp., are on the drawing board.

And that’s not including the pipelines destined for the region from the Permian Basin and Eagle Ford Shale.

“The importance of Corpus is obvious in the market,” Seale said. “The number of pipeline projects to link West Texas to Corpus Christi are almost too big to count…” and “almost every midstream in the space is looking at their own project” to potentially add on capacity.

“What that signals is that the same thing that’s happening in natural gas that makes Agua Dulce…the natural gas hub, the natural liquid point, is happening now with crude and other refined products,” Seale said.

“If we do our job right, Corpus Christi should become the northernmost delivery point into northern Mexico,” he said. A plethora of investments are earmarked to support energy product transport south of the border.

Mexico is no longer the “blank spot on the map…the infrastructure map is now fully connected and day by day becomes only more integrated across the border.

Consider the Nueva Era system, he said. “With our Nueva Era pipeline, we can connect to Waha with these other pipelines coming down…In a few months in theory, a Waha-Monterrey route, which HEP is calling the “WahaRey” route “is going to be a viable option for any gas shipper in West Texas.

By the same token, the Agua Dulce-to-Monterrey route, aka “AguaRey” is already available. Already there’s 500 MMcf/d going into Monterrey,” with pipeline capacity “almost tapped out,” Seale said, as the region grows and commerce builds.

“Imagine what a 20-inch diameter presidential permit pipeline across the border could do for liquids products?” he asked the audience. “It would be something very, very similar.”

HEP is creating a path, he said, “connecting the most efficient and largest points of product in South Texas with Monterrey, the most industrialized market in Latin America, the gateway to all of Latin America…