U.S. natural gas prices are looking weaker over the longer term, despite the recent rally, and the crude oil outlook, at least for now, is waning as well, energy analysts said Monday. 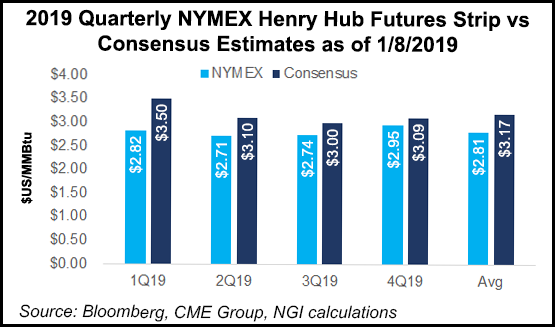 A sudden spike in domestic gas prices in late 2018 was a reminder that volatile weather still can wreak havoc on market forecasts, said the Raymond James team.

“While a relatively cold 2018/2019 winter has been a key driver, U.S. natural gas demand growth has unequivocally surprised to the upside over the past year,” analysts noted. “That said, our long-term thinking on U.S. gas market fundamentals remains unchanged: we think it will be difficult for U.S. natural gas demand growth to keep up with a wall of U.S. gas supply largely from associated gas production from oil wells over the next five years.”

Raymond James’ full-year Henry forececast of $2.80/MMBtu is about 5 cents higher than a previous prediction, and it also tweaked the 2020 forecast up by 5 cents to $2.30. Still, the big picture is bearish.

The better things get for oil prices, the worse they will get for gas, “exacerbated by the improving gas pipeline takeaway capacity from the Permian and Marcellus/Utica.”

“With that change, we held off on adjusting our forecast for 2Q2019-plus, as we expect weather-driven volatility to continue until the market has a better handle on storage coming out of winter,” said the Jefferies team. December weather “clearly weighed on the February/March contracts.”

Many investors pointed to the rapid supply growth in the second half of 2018, but the Jefferies team said “storage near historic lows in a growing market will cause more volatility going forward, with the potential for gas prices to spike even higher in a cold winter.”

“Since we last updated our commodity deck, the average natural gas price in 1Q2019 fell $1.52/Mcf while the 4Q2019 price fell 16 cents/Mcf. The disparity between the quarterly price movement illustrates…its sensitivity with regards to weather and its bearish medium- to long-term outlook.”

Temperatures warmed up in the final half of December, and season-to-date “this winter has been a tale of two halves with population weighted temperatures 4 degrees colder-than-normal through Dec. 14, but 4 degrees warmer-than-normal afterwards per PointLogic,” TPH analysts noted.

“Given that an incremental 1.0-1.5 Bcf/d of natural gas would likely destabilize the market, we continue to see the need for natural gas companies to proactively reduce activity,” TPH analysts said.

Analysts overall are not overly enthusiastic about oil prices. Raymond James is forecasting West Texas Intermediate (WTI) to average $62/bbl this year, with oil markets indicating “minimal upside from current levels over the next five years.” However, a “back-end-loaded rally” could lead to higher 2020 oil price averages around 90% above strip prices. Brent could average $100/bbl “or better” beyond then.

Goldman Sachs analysts on Monday acknowledged that oil prices began the year with their first meaningful rally in three months, but “we believe that price levels and term structure remain undervalued relative to both current and forward fundamentals.

“The oil market is still pricing in a sharp slowdown in global growth despite our economists’ forecast for resilient growth and robust late-2018 oil demand data,” said the Goldman team. “Even if physical markets prove robust, we continue to expect that the hiatus of the ”New World Order’ that we had forecast for 2018-first half 2019 will come to an end as new pipelines release the low-cost Permian Basin into the global oil market.”

Goldman’s team expects the oil market to rebalance at a lower marginal cost in 2019 given the higher inventory levels to start the year, but there was a “persistent beat in 2018 shale production growth with little observed cost inflation, weaker-than-expected demand growth and increased low-cost production capacity.”

Goldman analysts have two views. The first view is that spot prices will continue to recover with Brent backwardation returning by summer; inventories eventually revert to five-year average levels.

Meanwhile, the Societe Generale (Soc Gen) analyst team also revised down its oil price forecasts by $9 each, with 2019 Brent now expected to average $64, with WTI at $57. The projected WTI/Brent differential remains unchanged at minus $7.

“Oil markets have been subject to sustained risk aversion, broadly in line with equity markets,” on “serious concerns about global economic growth and global oil demand growth,” said the Soc Gen team. “Markets are worried about the U.S.-China trade war, as well as the macro environment for rising interest rates and gradually tightening liquidity. While there are certainly valid reasons for growth concerns, the fundamental outlook continues to be solid.”

Still, the price forecast was reduced because current prices had to be factored in. “In addition, the strength and persistence of the bearish macro sentiment and risk aversion cannot be ignored, because there are valid reasons for concern,” said the Soc Gen team.