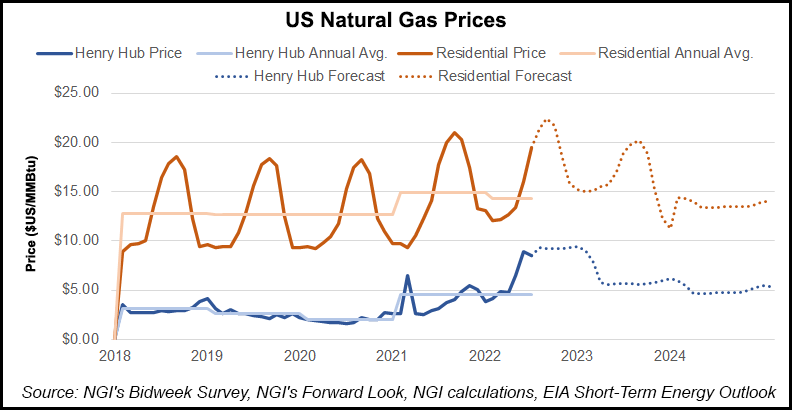 Amid rising domestic production by next year, the national benchmark price should retreat to $4.74 in 2023, the agency said in the June edition of its Short-Term Energy Outlook (STEO), published Tuesday.

Last month, EIA modeled an average Henry Hub price of $8.59 for the second half of 2022, illustrating the extent to which the domestic natural gas market has entered a period of sustained elevated pricing. What’s more, with the New York Mercantile Exchange futures trading above $9 through February 2023 as of Tuesday, EIA’s projections might be on the conservative side.

Domestic consumption is projected to total 85.1 Bcf/d in 2023, in line with 2022 levels, according to the latest STEO.

In the face of elevated prices and robust demand, U.S. dry natural gas production is set to average 95.7 Bcf/d this month before rising to 97.9 Bcf/d for the second half of 2022, the updated EIA projections show. That would mark a 2.7 Bcf/d, or 3%, increase over output in the second half of 2021.