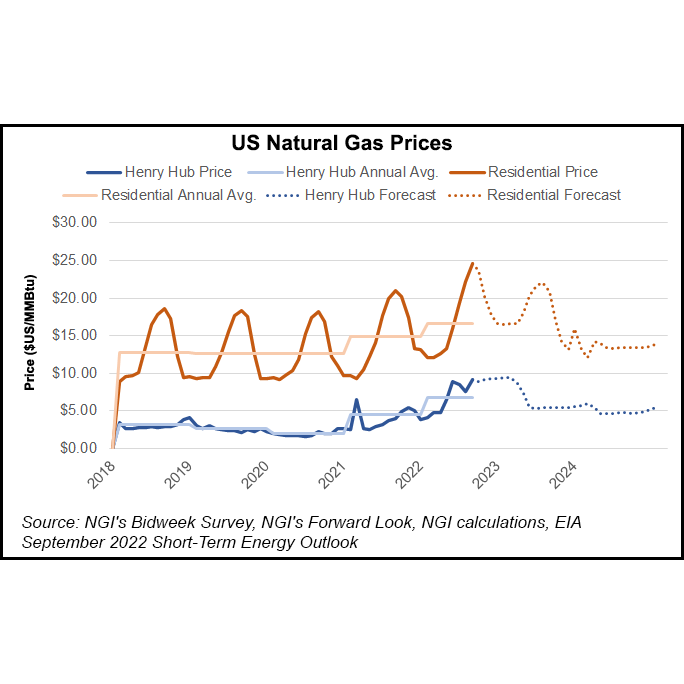 Natural gas prices rose during the month of August as continued strength in power burns kept inventories at a deficit to the prior five-year average, researchers said.

“We forecast that inventories will end the injection season…at more than 3.4 Tcf, which would be 7% below the five-year average,” researchers said.

As for the demand outlook, the latest STEO models domestic consumption of 86.6 Bcf/d in 2022, a 3.6 Bcf/d year/year increase.

This reflects “increases across all consuming sectors,” according to the agency. “We expect consumption to fall by 1.9 Bcf/d in 2023 because of declines in consumption in the industrial and electric power sectors.”

“Factors that will affect the volume of LNG exports in the coming months include the planned outage at Cove Point in October and Freeport LNG resuming partial operations by mid- to late-November,” researchers said.

Global consumption of petroleum and liquid fuels clocked in at 99.4 million b/d in August, a 1.6 million b/d increase over year-earlier levels, EIA said. Consumption is expected to see a 2.1 million b/d year/year increase for 2022 as a whole before rising another 2.0 million b/d in 2023, according to the agency.