Natural gas spot prices at Henry Hub are on track to average $7.54/MMBtu for the second half of 2022 before falling to $5.10 in 2023 on rising production, the Energy Information Administration (EIA) said in its latest monthly forecast. 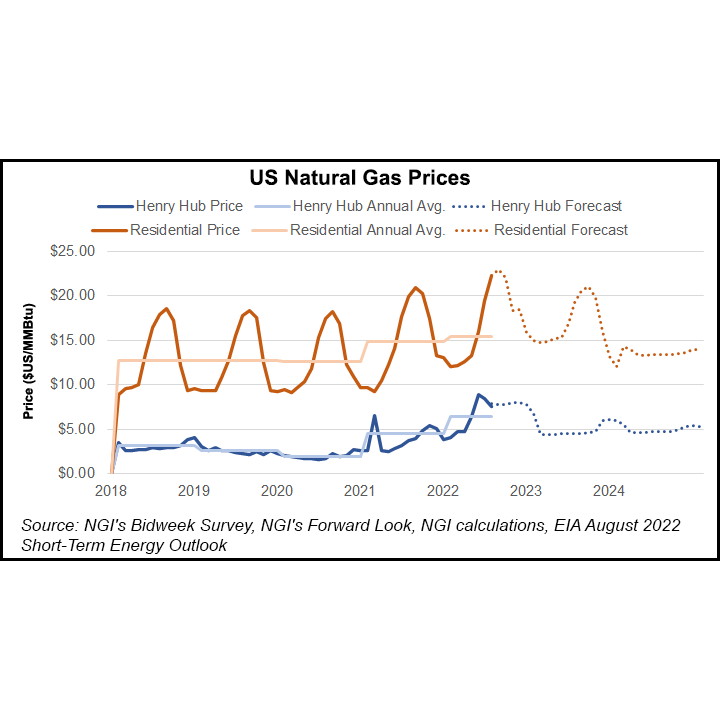 Prices at the national benchmark averaged $7.28 in July, EIA said in the updated edition of its Short-Term Energy Outlook, published Tuesday. That’s down sequentially from average prices of $7.70 in June and $8.14 in May, owing to incremental slack in the market following the extended outage at the Freeport LNG terminal, researchers said.

However, prices strengthened markedly between July 1 and July 29 amid “continued high demand” in the power sector, according to the agency.

“During May, June and July, the United States experienced 800 cumulative cooling degree days (CDD), or 69 (9%) more than the prior 10-year average and the most CDD for this time period since 2018,” researchers said.

Researchers estimated 36.1 Bcf/d of natural gas power burn for May through July, a 2.1 Bcf/d year/year increase and 3.4 Bcf/d above five-year average levels.

On the demand side, domestic consumption will average 85.2 Bcf/d for 2022 overall, up 3% year/year, the STEO data show.

Liquefied natural gas exports are set to average 10.0 Bcf/d for the third quarter and 11.2 Bcf/d for 2022, a 14% increase over year-earlier levels, EIA said.