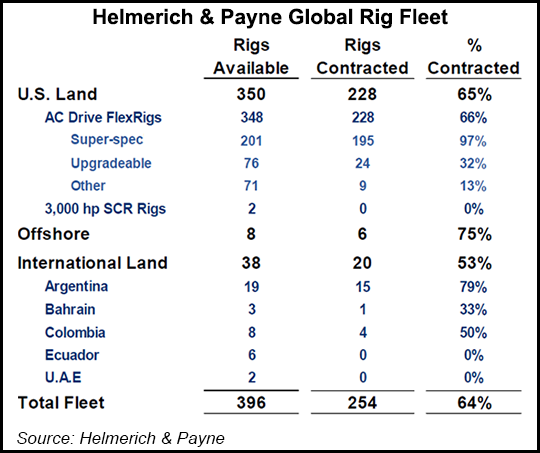 Quarterly domestic land rig revenue on an adjusted basis climbed by 4% sequentially to more than $900/day on average, on high demand for the super-spec FlexRig line. H&P’s contracted U.S. land rig count also increased, up by 35 year/year to 232 rigs.

“H&P’s leadership position in the super-spec rigs space contributed to another strong quarter of operational results,” CEO John Lindsay said. “In accordance with the trend toward greater well complexity, we expect to see additional demand for the company’s super-spec FlexRigs heading into our new fiscal year, particularly as customers continue to push increased lateral lengths and their use of pad drilling…

“The super-spec rig market in the U.S. is effectively fully utilized, and we continue to see indications that additional demand is forthcoming, even as oil prices have recently moved lower.”

Robust demand for top-of-the-line equipment in the onshore “is supportive of the overall pricing environment, and there is a persistent, upward pressure on dayrates primarily as a result of the value proposition we are able to deliver to our customers,” Lindsay said.

H&P upgraded and converted 54 FlexRigs during fiscal 2018, bringing the total number in its U.S. land fleet to 207.

“We are experiencing further demand for these rigs and expect to maintain an average upgrade/conversion cadence of 12 rigs per quarter for the next few quarters,” Lindsay said.

H&P reported quarterly net income of $2.5 million (2 cents/share), versus a year-ago net loss of $23 million (minus 20 cents),and a sequential loss of $8 million (minus 8 cents). Operating revenue increased year/year to $697 million from $532 million.

In the U.S. land division, operating income increased in the final quarter to $64 million, up $30 million sequentially and reversing a year-ago loss of $4 million. The increase in operating results primarily was driven by sequential increases in quarterly revenue days, up 6%, and average rig margin per day, which increased on an adjusted basis $921, or 4% to $24,321, as pricing continued to improve throughout the quarter.

“Throughout this fiscal year our results and cash flows from operations have shown sequential improvement,” CFO Mark Smith said. “These improvements were not only the result of our employees providing the best possible service to our customers, but also by our investments in super-spec upgrades and value-added technologies.

“We expect a similar environment in fiscal 2019,” with an initial capital expenditure (capex) plan “reflective of those expectations. The increase in our capex budget is driven by continued opportunities to invest in our current FlexRig fleet along with further planned rig reactivations and super-spec upgrades.”

Capex for 2019 is set at $650-800 million, with about 40% expected for super-spec upgrades. With a larger FlexRig fleet, H&P expects to see 30-35% of capex directed to maintenance and 25-30% for reactivations and other bulk purchases. General and administrative expenses in fiscal 2019 are expected to be relatively flat at $200 million.

H&P plans to keep “an appropriate store of liquidity and a balance sheet that can weather the cyclical nature of our business,” Smith said. “The company recently refreshed its revolving credit facility by extending the term and by expanding its size to $750 million…Given our operational and capex outlook for fiscal 2019, we do not currently anticipate utilizing this facility, but see it as a prudent step for our capital structure.”

In the offshore business unit, operating income increased to $8.2 million, up by $4.4 million from fiscal 3Q2018. The number of quarterly revenue days on H&P-owned platform rigs decreased sequentially by 4%, while the average rig margin per day increased sequentially by $6,766 to $11,452 primarily because of higher self-insurance expenses and rig start-up costs incurred in the prior quarter.