The trough in the U.S. land rig count had appeared to be approaching, but as prices continue to stagnate, assertions that the market already has touched bottom “could soon prove to be false,” Helmerich & Payne Inc. (H&P) CEO John Lindsay said last week. 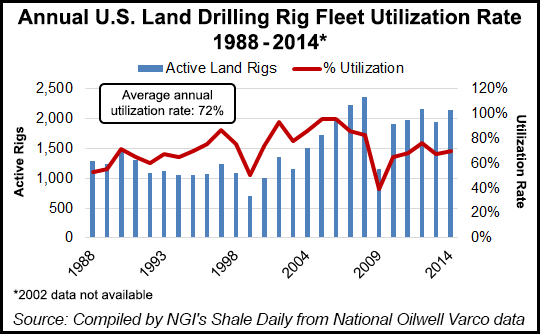 During a wide ranging conference call to discuss fiscal 3Q2015 results, Lindsay acknowledged that there had been a few signs that the U.S. land market was beginning to gain momentum. Then oil prices fell again, and 2015 is looking more dismal than ever.

H&P is one of the biggest land drillers in the United States. At the end of June its existing fleet included 342 land rigs in the United States, 40 international land rigs and nine offshore platform rigs. It is scheduled to complete another 12 H&P-designed and operated FlexRigs, all under long-term contracts, bringing its total fleet to 394 land rigs, including 373 alternating current (AC) drive FlexRigs.

Some industry observers, including exploration and production (E&P) executives, had been optimistic that there would be a 200-rig increase in U.S. land operations by the end of the year. H&P never made that call, Lindsay reminded analysts.

“We couldn’t see how…that could happen,” he said. “We weren’t…expecting oil to pull back into the $40s. I mean, the reality is, I think if you went out and surveyed 10 different E&P operators, you would get a pretty wide range of expectation on pricing, and I think a lot of folks are thinking oil prices are going to be lower as opposed to moving higher.”

That’s unfortunate, he said, because “the entire energy sector had expected to see some recovery in the back half of 2015…The industry has idled over 1,150 rigs in the U.S. since the peak rig count in 2014,” including close to 720 legacy silicone-controlled rectifiers (SCR) and mechanical rigs and 440 AC-drive rigs.

It’s a big task to trim costs, but it also can’t be done indiscriminately because it could “unduly damage our capacity to readily respond to a reversal in market conditions,” Lindsay said. “Our currently idled fleet is worth billions of dollars in terms of replacement value. We take great care to preserve that value.”

The Tulsa-based contractor could delay some of its operating and maintenance, but the FlexRig program is a long-term investment. “It’s a case of pay me now or pay me more later.'”

Predicting U.S. land conditions through the rest of the year is an impossible task. Anecdotally, Lindsay said, customers are assuming oil prices “don’t improve from here…First, we’ve seen instances where some customers have, at least for now, backed off of plans for reactivations in the second half of 2015. Secondly, some customers believe it’s reasonable to assume that the current U.S. land rig count may not be sustainable” with West Texas Intermediate oil priced in the $40s.

“Operators remain disciplined with respect to their budgets, and they plan to spend within cash flow, and lower commodity prices mean fewer wells drilled,” the CEO said.

H&P’s U.S. land drilling operations delivered $122 million in operating income during fiscal 3Q2015. The number of revenue days declined sharply, resulting in an average of 156 rigs generating revenue, a 32% sequential decline. On average, 128 of the rigs were under term contracts, with 28 working in the spot market.

“Looking ahead to the fourth quarter of fiscal 2015, we expect revenue days to decrease by about 3-4% quarter-to-quarter,” Tardio said. “Excluding the impact of revenue corresponding to early terminated long-term contracts, we expect our average rig revenue per day to decline to roughly $26,000. The average rig expense per day level is expected to decline to roughly $13,900 as we continue to manage the transition toward what we expect to be a more stable level of activity during the next few months.”

The challenges “are clear,” Lindsay said. “Faced with a global oversupply of oil as well as other geopolitical and macroeconomic headwinds that intensify the supply-demand imbalance, the short-term outlook for the industry is unfavorable. However, a significant difference today compared to previous downcycles is that the U.S. may be in a position to become a global swing producer. In such an environment, the energy services landscape would most probably become more competitive with even greater pressure to reduce well cost, enhance productivity and add value for customers.”

Net income in fiscal 3Q2015 was $91 million (83 cents/share) with operating revenues of $660 million, versus year-ago profits of $192 million ($1.75) and revenues of $952 million. Early termination fees added about 55 cents/share to the latest profits. U.S. land operations operating income was $122 million, versus year-ago earnings of $271 million and sequential earnings of $225 million.