U.S. land rig margins increased on average by more than $800/day for Helmerich & Payne Inc. (H&P) during the fiscal third quarter on increased utilization and demand for super-specification rigs. 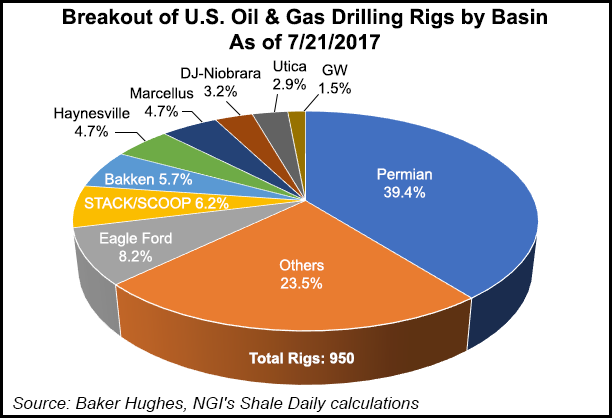 The Tulsa-based drilling contractor’s U.S. land rig market share has risen to 20%, while the alternating-current (AC) drive rig segment market share is at 30%. The U.S. contracted land rig count increased by 22 rigs in the quarter, with HP’s AC FlexRigs still the rage.

“Additional demand for super-spec FlexRigs remains in the market even in a mid-$40’s oil price environment, and we are responding with upgrades to our existing AC fleet,” CEO John Lindsay said.

Since the previous earnings call in April, H&P has put 17 FlexRigs back to work, said CFO Juan Pablo Tardio.

“The Permian led the way with 10 rigs, followed by two each in the Niobrara and SCOOP and STACK plays and one each in the Eagle Ford, Piceance and Utica,” he said. The SCOOP also is known as the South Central Oklahoma Oil Province while the STACK is an acronym for the Sooner Trend of the Anadarko Basin, mostly in Canadian and Kingfisher counties.

“We have also added seven new customers since the last call as a result of the performance our folks are delivering,” Tardio said. “Our three most active basins today are the Permian, the SCOOP and STACK play and the Eagle Ford. The Permian remains our most active operation with 91 rigs contracted compared to 85 rigs during the 2014 peak.”

Overall, H&P’s U.S. land segment at the end of the fiscal quarter had 190 contracted rigs with an increase of about 26% in total quarterly revenue days.

Fiscal 2017 capital expenditures have been increased to $400 million from $350 million, and could potentially be higher depending on the timing of expenditures related to “upgrading opportunities.”

The higher spend is related to more rigs being upgraded than initially anticipated and higher levels of maintenance capital as more rigs are working than previously estimated, Tardio said.

H&P’s quest to add technology has provided an oomph to business, said Lindsay.

“Despite the oil price uncertainty and the choppiness that it tends to create in the market, H&P is successfully growing market share and continuing to build its brand…Technology also plays a pivotal role in our success,” he said.
In June H&P completed its takeover of Motive Drilling Technologies Inc., a software company that has developed a bit guidance system that uses cognitive computing to improve directional drilling decision automation and optimization. To date it has been used to drill more than three million feet of horizontal hole across all of the major U.S. shale plays.

“We believe H&P is well positioned to successfully manage the ongoing U.S. land market and any short-term volatility that may exist,” Lindsay said. “We have successfully maintained an industry leading cadence for upgrades, which has allowed us to increase our active fleet by 98 rigs during this fiscal year, 86 of which were super-spec upgrades.”

In the U.S. land segment, the number of quarterly revenue days increased sequentially by 26%, versus an estimated 21% gain for the overall market. Adjusted rig revenue/day decreased sequentially by $525 to $21,676 on average, as additional rigs returned to work at spot market rates and as long-term contracts signed at higher, prior peak rates expired or reset at or slightly above spot market rates during the quarter.

H&P reported a quarterly net loss of $22 million (minus 21 cents/share) with operating revenue of $499 million. Net cash provided by operating activities was $90 million.

H&P expects U.S. land operations during the fiscal fourth quarter (July-September) to increase by 3-5% sequentially. Average rig revenue/day is expected to be slightly more than $21,000, with rig expenses/day averaging roughly $13,700.