After a years-long period of relatively low volatility, Henry Hub natural gas prices are expected to see more “peaks and valleys” ahead on growing export demand and a lack of infrastructure development, according to RBN Energy LLC President David Braziel. 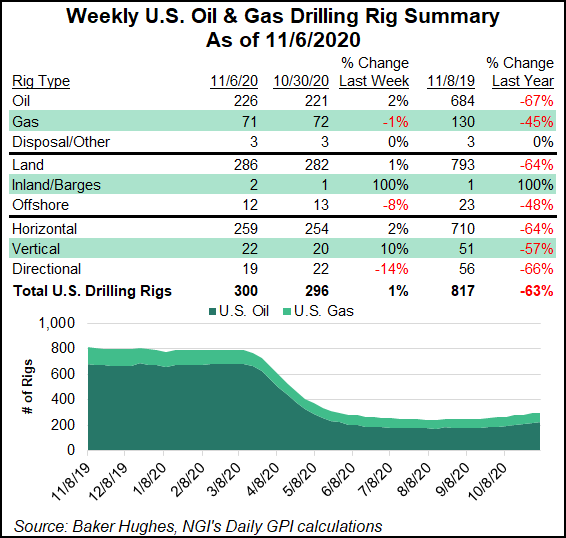 On Monday, the first day of the 2020 LDC Natural Gas Forum in San Antonio, Braziel said the pace of export activity has major implications for the U.S. supply/demand balance. Liquefied natural gas (LNG) demand has grown exponentially in the past five years to 9 Bcf/d plus at the end of 2019, from zero in 2016. Feed gas volumes are exceeding 10 Bcf/d, with new production units to come online in 2021.

However, LNG “comes with a huge catch,” according to Braziel. Covid-19 “completely erased the margins” for the super-chilled fuel as economies around the world shut down to mitigate the spread of the virus. This led to rapidly swelling storage inventories and a major pushback on U.S. supplies, with feed gas flows plunging below 3 Bcf/d and buyers canceling dozens of cargoes over the summer.

This year also was particularly challenging for domestic LNG because of the historic number of hurricanes that hit the Gulf Coast. Lake Charles, LA, took a direct hit not once, but twice, in a two-month span. Cameron LNG temporarily shut down operations ahead of Hurricane Laura in August and had been operating at a reduced capacity. Last Friday the terminal indicated that it finally had achieved production from all trains and had resumed cargo loading operations.

That said, “international arbitrage isn’t what it used to be,” Braziel said.

Though exports have soared to new heights this month and Henry Hub prices have recovered from summer lows, there are signs the global market faces another oversupply situation next summer. Covid-19 adds to the uncertainty.

IHS Markit’s Sam Andrus, executive director, who also spoke at the forum, said exports to Europe remain “in the money” only through February. The question is whether international markets wait until May or June to cancel cargoes, storage capacity is exhausted by August or September, and prices subsequently crash. It is possible, though, that global markets start to push back on U.S. cargoes earlier and the contraction “doesn’t go as deep” as it did this year, he said.

A similar supply overhang would be likely in the Lower 48 without export demand. For example, the resumption of gas exports starting in September was seen as key to prevent toppling U.S. storage stocks. In the coming years, export demand is expected to continue coming “to the rescue” of the U.S. gas market.

“If that’s all there was, the U.S. gas market would be massively out of balance over the next five years,” Braziel said.

Throw in LNG demand coming from the facilities in operation, new production units expected to come online at Sabine Pass and Cameron next year as well as Sabine Pass Train 6 and Venture Global’s Calcasieu Pass export projects that are currently under construction and those volumes balance the market, “but just barely,” according to Braziel.

“A warm winter or a hiccup in LNG exports, and this market could be thrown totally out of whack,” he said. This means “there is still downside risk to today’s forward curve.” It also means the domestic gas market may be “quite dependent on LNG to balance” and therefore be tied to that market “in ways we’ve never seen before.”

Another factor to consider, he said, is that the last two years of exports have shown that a higher proportion of U.S. gas is being exported to markets with similar demand patterns as the Lower 48. If a cold winter in the United States were to drive up domestic gas demand, Europe and Asia markets also could have cold winters, which would lead to strong demand.

“If the arbitrage (arb) is strong, “then weather in these countries may be irrelevant,” Braziel said. “However, if the arbs remain tight and LNG exports begin to exhibit a seasonal pattern, then this may amplify the seasonal patterns we already see in our own market.”

Under RBN’s scenario, increased volatility is likely, with Henry Hub at times climbing above $5.00 and below $2.00. The New York Mercantile Exchange currently doesn’t reflect this level of seasonality and volatility. Prices are averaging around $2.76 out to 2025, which is “hardly anything to get excited about,” according to Braziel.

“Seasonality is nothing new to U.S. gas markets,” he said, “but what is new is the U.S. acting as the swing supplier to a market with those same seasonal patterns.”

Meanwhile, many export facilities are pulling feed gas supplies from the same regions and the same pipelines, according to Braziel. In the Permian Basin, pipeline infrastructure projects including the Permian Highway Pipeline, which is nearing completion and already taking feed gas, and Whistler pipeline, due online in the second half of next year, are targeting export markets.

However, building infrastructure has become increasingly difficult. Andrus said the Atlantic Coast, Keystone XL, Dakota Access and Sabal Trail pipelines are a few examples of projects that have “gotten caught in the crosshairs” of environmental challenges, which increases the cost and risk.

“Going forth, you won’t see any interstate pipelines get built,” Andrus said.

Instead, optimization of existing assets is critical, said Energy Transfer LP’s Adam Arthur, senior vice president of Business Development. Looking at assets and determining if they are “flowing in the right direction” and “flowing the right products” are some of the things Energy Transfer studies to enhance operations despite the challenging regulatory environment.

Diversity of supply also is important, given the downturn in the oil market and lower associated gas production. Producers tend to respond to netback value, according to Braziel. Operators able to ramp up activity will likely deploy more rigs in the Permian.

However, fewer wells are expected to be completed going forward given the lower level of activity comes amid a backdrop toward decarbonization. “Production economics are more important now than ever.”

Andrus said economics are crucial, given the lack of capital available to the market. If Permian associated gas “doesn’t show up, supply isn’t as secure as it once was, and that makes the Gulf Coast a little more risky” for developing LNG facilities beyond those sanctioned, he said.

In Appalachia, producers are challenged under the new financial paradigm, according to Andrus. Only a few operators are financially able to ramp up production, and most would need to clean up their balance sheets before ratcheting up capital spending.

The Haynesville Shale, meanwhile, has been a “surprising play” over the past couple of years, as producers in the region “have cracked the code to drop breakeven costs,” Andrus said. The play, which straddles North Louisiana and East Texas, has breakeven costs of $2.00-2.25 compared with $3.00-plus a few years ago.