Privately backed financial firms have close to $1 trillion ready to deploy into the global oil and natural gas sector, with one-quarter now planning acquisitions by year’s end that mostly target North America and the Asia-Pacific, a survey by Ernst & Young has found. 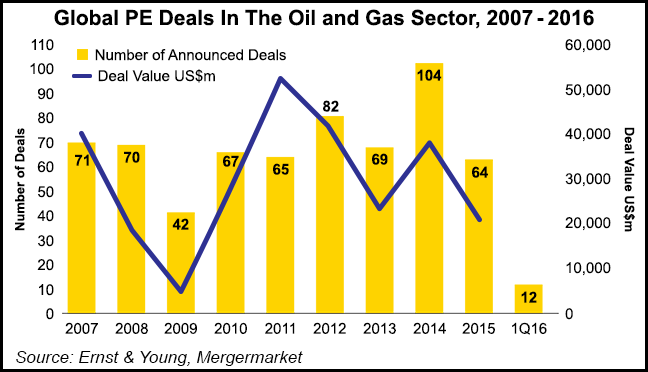 With an estimated $971.4 billion of private equity (PE) available as of June, 100 global firms surveyed are preparing to increase investments in the energy sector, according to “Capitalizing on Opportunities: Private Equity Investment in Oil and Gas.” About one-quarter are planning acquisitions before the end of the year, while 43% expect to invest by the first half of 2017.

“Access to financing is arguably the biggest challenge facing oil and gas companies,” said EY’s Andy Brogan, global oil and gas transactions leader. “While many expected PE funds to swoop in with capital during the oil price downturn over the last 18 months, investment has fallen short. But the tide may be turning. Greater consensus over the oil price future and more favorable asset valuations are improving the conditions for PE, and we expect to see an uptick in deals before the end of the year.”

The data was compiled by Mergermarket during 1Q2016, which surveyed PE firms that had made at least one oil and gas sector investment over the last two years. More than half of respondents (52%) are based in North America, 26% in Europe, 12% in the Asia-Pacific region, 5% in Latin America and 5% in the Middle East and Africa.

Over the past decade, PE made inroads into the oil and gas sector as cheap credit from the Federal Reserve Bank financed the resources boom in North America, EY said. In 2014, North American PE firms accounted for two-thirds (67%) in volume and 83% in value for all global oil and gas deals, which far surpassed previous years.

The downturn has challenged financiers looking to protect their investments and build their portfolio companies, but many now are seeing an opening to commit fresh capital that could benefit from the “lower for longer” price environment.

“From this, we conclude that PE firms believe that valuations will favor the buyer,” EY said. “This will ensure firms get the right assets, ones that are properly priced and valued.”

Many PE-based operators now are carrying a heavy debt burden, which has led to more creative capital structures. Of the 71% exploring new capital structures, 62% said they were looking at joint ventures and drillcos, while 59% cited contingent pricing as the most popular options.

As to where capital may be deployed, the survey found more attention focused on rising energy demand in emerging economies. Every single respondent expects to see more PE funding in Asia-Pacific, up from 79% in the previous PE survey conducted in 2013. “Low cost, ease of doing business and general macroeconomic growth” were cited as the drawing cards for investors.

The U.S. unconventional gas and oil boom has attracted billions in PE money, while private financing also has been a go-to option for liquefaction plants and export terminal projects, the survey found.

More involvement by PE firms over the next two years is expected in the midstream and upstream segments. An equal share (44%) sees these two sectors as the best opportunity for return on investment. Private funding also offers short- and long-term financial solutions across the oil and gas sector, with 63% of survey respondents expecting value to corporates through growth capital.

“PE firms have an important role to play in today’s transforming oil and gas sector,” Brogan said. “Opportunities will continue to emerge over the course of the year as more companies succumb to the new normal oil price environment. Funds looking to invest will need flexibility, patience and clear strategic plans to take advantage of a buyer’s market.”

Natural gas-fired electric generators made up a majority of the failures identified by FERC during an inquiry into the extreme cold weather that rattled power markets in Texas and the Midwest in February. The Federal Energy Regulatory Commission, in a joint effort with the North American Electric Reliability Corp. (NERC), found freezing generator components and…