After months of haggling, hedge fund TPG-Axon Capital, which owns 7.3% of outstanding SandRidge Energy Inc. shares, has gained at least a portion of the changes it had urged at the Oklahoma City-based company, and it stands poised to remove CEO Tom Ward or take control of the board of directors. 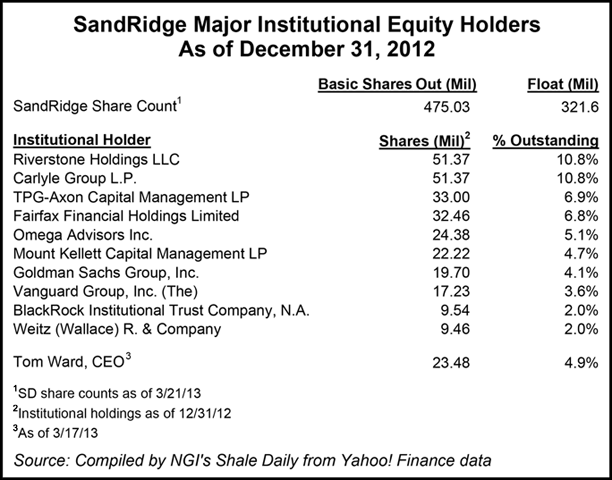 Last week a judge in the Court of Chancery of the State of Delaware found that SandRidge directors had violated their fiduciary duty in their efforts to block the hedge fund’s attempt to replace the current board (see Shale Daily, March 14). SandRidge subsequently said it had reached a settlement with TPG-Axon that included the addition of four of the hedge fund’s nominees to the board: Stephen C. Beasley, Edward W. Moneypenny, Alan J. Weber and Dan A. Westbrook.

The newly expanded board will undertake a review of the company’s “strategy and costs, with particular focus on reducing corporate overhead and optimizing capital expenditures,” SandRidge said. “As a symbol of its commitment to improving efficiency, the board has reduced compensation for directors, effective immediately, from $375,000 to $250,000 per year.”

The expanded board will complete by June 15 “a review by an independent firm of the related-party transactions that have been outlined by TPG-Axon,” the company said. The hedge fund has alleged that a company controlled by Ward’s children controls roughly 475,000 acres in the Mississippian Lime formation near SandRidge operations. That acreage count would make the private investment company, WCT Resources, the fifth largest E&P company in the Mississippian, according to TPG-Axon, which has said it is “concerned” with the scale of WCT’s involvement in the play and by the “suspicious timing” of WCT’s land purchases.

Prior to the settlement, the SandRidge board said it had “found no evidence of wrongdoing” regarding SandRidge’s transactions with WCT Resources, which “is an independent company; no person affiliated with SandRidge has any control over WCT Resources activities.”

TPG-Axon had called for SandRidge to replace Ward, realign its board and consider the possible sale of the company (see Shale Daily, Feb. 21; Dec. 27, 2012). Under terms of the settlement agreement, Ward will remain chairman and CEO while the board completes its review. The reconstituted board is charged with deciding by June 30 “whether or not to terminate Mr. Ward’s employment,” according to the company.

If Ward is retained, “three current directors will resign and one additional TPG-Axon nominee will be elected to the board, resulting in a majority of the board being TPG-Axon nominees.” If Ward is no longer CEO, current SandRidge President James Bennett will be appointed interim CEO and the board will conduct a search for a successor CEO. Jeffrey Serota would be appointed interim chairman.

“We are pleased to reach agreement with the SandRidge directors and look forward to working together to build shareholder value,” said TPG-Axon founder Dinakar Singh. “We believe the actions taken by the board address our concerns and are a promising start to a bright future for SandRidge. We all believe that SandRidge has tremendous asset value, and we expect that the company will relentlessly focus on growing and realizing that value through a particular focus on execution and efficiency.”

In a pair of transactions since the settlement, Ward sold a total of 3.67 million shares of SandRidge for about $20.9 million, according to filings with the Securities and Exchange Commission. The CEO still owns about 23.5 million SandRidge shares, which is nearly 5% of outstanding shares.

SandRidge’s two largest institutional shareholders are Riverstone Holdings LLC and Carlyle Group LP, which each own 51.37 million shares (10.8% of outstanding shares) at the end of 2012. At that time TPG-Axon owned 33 million shares (6.9%). The hedge fund says it has sense increased its holdings to 7.3% of outstanding SandRidge shares.

SandRidge President and COO Matthew Grubb recently said he intends to resign “to pursue other opportunities.”