If you’re looking to the natural gas futures strip for any meaningful price action — which should be a given considering the sweltering summer weather, low storage inventories and relatively stagnant production — you’ll need to look elsewhere. 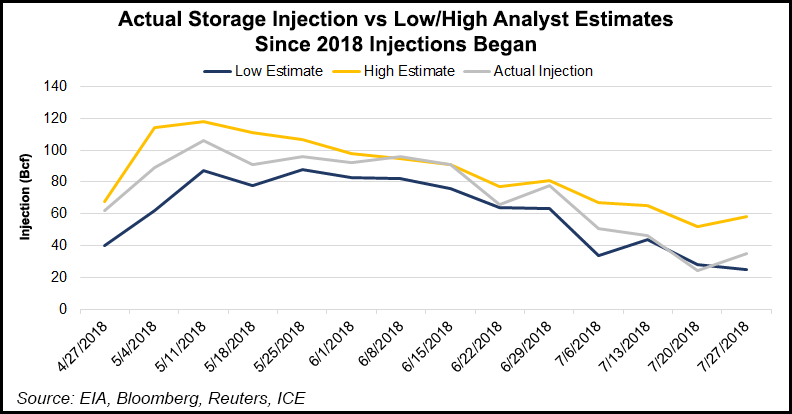 The Nymex September futures contract ended the July 26-Aug. 1 period unchanged at $2.76, although gains seen in supply regions across the country lifted September forward prices up an average 3 cents during the same time period, according to NGI’s Forward Look.

On the weather front, the latest trends were mixed, with slight gas-weighted degree day (GWDD) losses continuing in the medium range as confidence increased on a cool shot across the Ohio River Valley into the Southeast focused on Aug. 11, according to Bespoke Weather Services.

The forecaster, however, also noted “a tick up” in some long-range warmer risks, noting the medium-range cooling is due more to temporary upstream tropical forcing (that is noisy and difficult for models to work out) as opposed to a shift in the base atmospheric pattern toward a more Nino-like pattern.

“The result is that through the middle third of August, we could still see modest warmth before we would eventually expect a more Nino-like pattern by the end of the month to present more sustained cool changes,” Bespoke chief meteorologist Jacob Meisel said. Still, with cool risks lingering across the South/Southeast, it will be hard to get GWDDs as elevated, he said.

Meanwhile, the Energy Information Administration (EIA) on Thursday reported a 35 Bcf build into natural gas storage inventories for the week ending July 27, well below market expectations that clustered around a build in the low 40 Bcf range.

By region, the East injected 25 Bcf into inventories, the Midwest injected 28 Bcf and the South Central withdrew 12 Bcf. The Pacific posted a withdrawal of 7 Bcf.

Prior to the report, consensus had settled around a build in the low 40 Bcf range, in line with the five-year average. Kyle Cooper of IAF Advisors had projected a 40 Bcf build, while Genscape Inc. expected a 45 Bcf injection. A Bloomberg survey had a range between 25 Bcf and 58 Bcf, with the median response of survey participants coming in at 43 Bcf. Intercontinental Exchange settled at 43 Bcf.

The EIA’s reported 35 Bcf build was 5 Bcf below projections by Bespoke Weather Services, which said “today’s print continues to demonstrate a tight market (albeit one that has loosened slightly from last week’s print).

And while the fresh storage data was providing some uplift to September futures on Thursday, with the prompt month as much as 6 cents higher during the last hour of trading, much of the market’s focus in recent months has been on record production.

“We estimate it is unlikely that storage will reach the five-year average (around 3.8 Tcf) this refill season, but we believe that investors are more comfortable entering the winter with storage below average” due to the much higher year/year (y/y) production (+8.3 Bcf/d in July), which is likely to continue to grow into year end 2018, analysts with Jefferies LLC said.

Meanwhile, Genscape Inc. said Lower 48 production closed July with a “solid recovery” from some late-month disruptions to lift the month’s final average to record highs. Its daily pipeline production estimate has July closing out at a daily average 80.27 Bcf/d. The month’s single-day high of 80.97 on July 4 established the all-time record.

The monthly average was nearly 1.18 Bcf/d greater than June’s average, driven primarily by about 0.5 Bcf/d of gains out of the Northeast and the Gulf of Mexico, “the latter being a product of restoration of volumes from a handful of offshore platforms,” Genscape senior natural gas analyst Rick Margolin said.

“Add to this volumes produced in Western Canada, which are running more than 15.42 Bcf/d, a 0.73 Bcf/d increase on last summer to date,” Genscape said.

The only areas to report a summer-on-summer decline have been the Midcontinent, San Juan and the West (excluding Rockies), Genscape said. Its latest production forecast expects sustained growth through the summer and the rest of year, with the summer-on-summer surplus expected to further widen, “driven by completion of maintenance events and gas and oil forward curves continuing to indicate additional deployment of rigs,” Margolin said.

Furthermore, there have been some recent infrastructure additions on the demand side of the ledger which have helped to counter production growth, analysts at Houston-based Mobius Risk Group said. In addition, based on public commentary from producers, there could be less prolific supply growth in the later half of the year.

Already, there are signs in the Permian Basin that natural gas infrastructure may be running near capacity. Gas production climbed from 6.4 Bcf/d at year-end 2017 to 7.2 Bcf/d in March 2018, “but production has been roughly flat at this level for five months,” Jefferies said.

“The narrative this year has been focused on excessive associated gas production plus backhauled Appalachian production, and the subsequent glut of southern U.S. supply. However, current inventory levels and the fact that the y/y storage deficit in this region has not materially changed in the past six weeks suggests natural gas demand is not to be ignored,” Mobius analysts said.

Turning to forward markets across the United States, most pricing locations posted weekly changes that were just as minimal as those seen in the futures market. The handful of exceptions, however, were seen in various supply basins of the country.

While not likely related to the increases seen at El Paso-Permian, Kinder Morgan on Wednesday declared a force majeure on El Paso Natural Gas’ (EPNG) Line 3130 following a “third-party incident” that occurred in a rural area in Midland County, TX. A thorough investigation is underway to determine the cause of the 12-inch pipeline failure, and “preliminary indications are that a third-party pipeline located in close proximity to the EPNG line failed before the EPNG line failure.

One Kinder Morgan employee was injured and is in stable condition and being treated at the University Medical Center in Lubbock, an e-mailed company statement read.

Service impacts are expected to be minimal, and the line will be returned to service as soon as possible.

Pricing locations in the Appalachia supply region also posted gains as additional takeaway capacity is expected to go online later this month. Williams LP management on Thursday said the long-awaited 1.7 Bcf/d Atlantic Sunrise project is “nearing completion”, and the company is targeting full in-service at the end of August.

The 200-mile project was approved by the Federal Energy Regulatory Commission in February 2017 and began greenfield construction late last year. It would expand the Transcontinental Gas Pipe Line system, clearing a path for constrained gas in northeast Pennsylvania to reach markets in the Mid-Atlantic and Southeast. Partial service for 550 MMcf/d started up earlier this year.