July natural gas futures strengthened Wednesday, climbing to $2.963, as slightly warmer trends in the latest weather models and expectations of a near to slightly below-average storage injection on Thursday lifted the market. Spot gas prices were mostly lower, but some areas did get some uplift as hotter near-term forecasts increased the number of cooling degree days (CDD) on tap for the next 15 days. The NGI National Spot Gas Average stayed flat at $2.63. 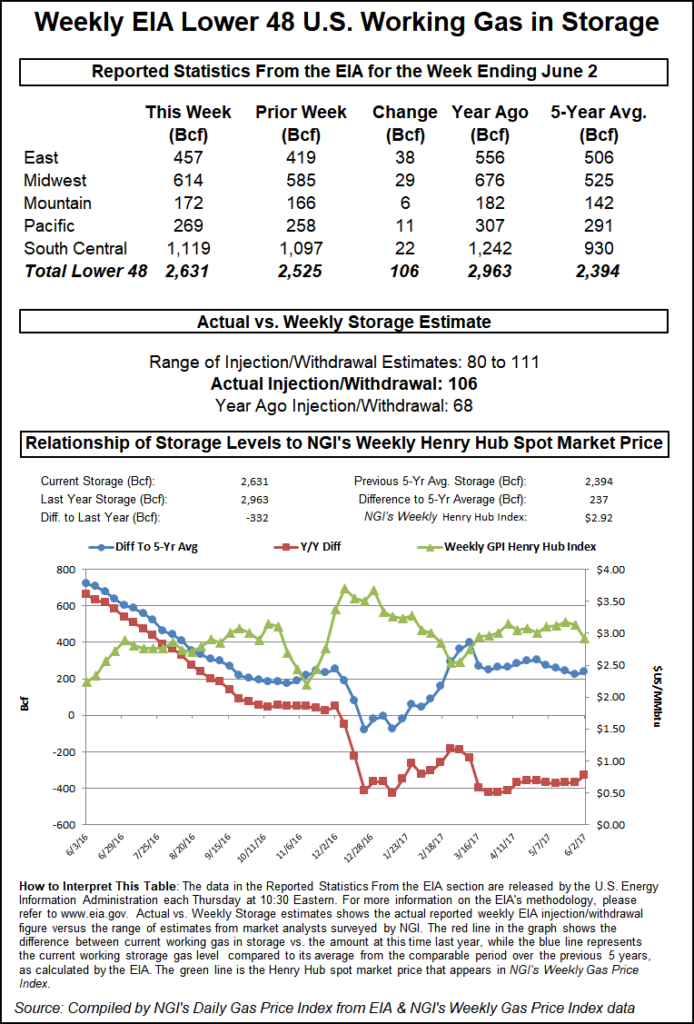 Nymex July futures opened the session at around $2.94 but dipped as low as $2.916 before ultimately settling 2.4 cents higher on the day. Prices remained range-bound throughout the session as only subtle changes showed up in midday weather data runs. August rose 1.9 cents to $2.948, while balance of summer (August-October) hit $2.935.

As for weather, the midday data was mixed with a few days hotter and a few cooler, but not quite hot enough over the East to end June, according to NatGasWeather. Specifically, the weather data held hotter trends for this weekend over the Midwest and East and slightly cooler trends for much of the United States late next week. Data also held the hot upper ridge strengthening over the southern and central part of the country June 23-28.

“With prices higher today, it must have been close to hot enough to satisfy” the natural gas markets, but “not enough to take out $3,” NatGasWeather said.

Still, the CDD gains that resulted from the short-term outlook, while small, are sufficient for projected CDDs in June to match the all-time record set eight years ago in 2010, according to EBW Analytics.

On an aggregate basis, CDDs are expected to total 57.7 CDDs above normal.

The hotter-than-normal weather is also sufficient to add 70-80 Bcf of demand, and to eliminate more than half of the decrease in storage versus the five-year average when June began, EBW said.

The EIA will release its weekly storage report at 10:30 a.m. EDT on Thursday.

Mobius Risk Group said with storage inventories as of June 1 standing at 1,817 Bcf, an average injection of 73 Bcf per week would be needed in order for storage to reach the 3.5 Tcf mark ahead of the winter withdrawal season. Over the 23-week period from June 8-Nov. 2 last year, weekly injections averaged 53 Bcf.

A simplistic view suggests each week would need to be 3 Bcf/d loose to the prior year’s comparable injection to reach the 3.5 Tcf threshold. “As a result, this Thursday’s storage report should not be considered a bearish indicator unless the injection is larger than 103 Bcf,” Mobius said.

Indeed, being closer to 3.5 Tcf of storage may be a bit more necessary this winter, since at least two additional pipelines in Mexico should be up and running by the end of 2018, NGI director of strategy and research Patrick Rau said.

“That could mean an extra 1 Bcf/d or so of exports to Mexico going into winter. Nothing that the market cannot handle, but if we have another really cold winter, that extra little buffer could certainly help,” Rau said.

Looking ahead, Mobius said EIA storage inventory reports during the next several weeks have the potential to move regional markets with a shifting trend in northern versus southern storage builds, and increased tropical activity should ignite the debate between price impacts of supply disruptions versus precipitation-driven demand losses.

Tropical Storm Bud, which had briefly reached Category 4 status before weakening on Tuesday, was moving toward the north-northwest near 5 mph (7 km/h), a general motion that was expected to continue Wednesday, according to the National Hurricane Center (NHC). Bud is forecast to accelerate northward on Thursday and continue that motion into Friday, the NHC said in its 1 p.m. CT update.

On the forecast track, the center of Bud, the second named storm of the 2018 Atlantic hurricane season, is expected to cross southern Baja California Sur late Thursday and move over the Gulf of California later on Friday.

Maximum sustained winds have decreased to near 60 mph (90 km/h) with higher gusts. Although additional weakening is expected during the next day or so, Bud is forecast to still be a tropical storm when it reaches southern Baja California Sur late Thursday.

While the storm has remained off the coast, it is likely disrupting the ability to import liquefied natural gas cargos into Mexico’s west coast, Mobius said. Bud has weakened considerably and is expected to continue doing so, but “the potential for demand destruction in northwestern Mexico and the U.S. Desert Southwest will remain for the next several days,” the Houston-based firm said.

Turning to the spot market, prices were generally lower in the western half of the country as mostly mild temperatures and low demand were on tap for Thursday.

California markets posted losses of less than a nickel as daytime highs in the state were expected to continue climbing for the rest of the work week before easing back for the weekend. Still, even with high temperatures in the 70s and 80s, there was little in the way of strong demand in the region.

Similarly small declines were also seen in the Rockies. Northwest Wyoming Pool lost a penny to hit $2.35, as did Cheyenne Hub, which dropped to $2.45. Kingsgate, meanwhile, jumped 11 cents to $2.05.

Prices throughout the West could get a boost next week, however, as Radiant Solutions forecasters are calling for a strong ridge to bring record-challenging heat to the Pacific Northwest for the middle of next week. Highs are forecast to peak in the low 90s in Seattle and upper 90s in Portland.

“Furthermore, this upcoming heat is part of a longer-term pattern that is expected to be persistently hotter than normal on a nationwide scale in the coming weeks, leading June 2018 to challenge June 2010 for the hottest June among records since 1950 from a population-weighted CDD perspective,” Radiant Solutions said.

Meanwhile, next-day gas in the Permian Basin shed more than a dime on average as a revision to El Paso Natural Gas’ maintenance schedule has led to a cut of over 200 MMcf/d of flows through the “Waha GE” constraint point in Permian West Texas, according to Genscape Inc.

This location tracks volumes moving west near the Waha hub and has been substantially limited for several months due to an ongoing force majeure repair event. A separate meter replacement event that began Tuesday had its associated operating capacity reduction revised, changing the operating capacity limit to 152 MMcf/d from 272 MMcf/d. This point averaged ~350 MMcf/d of flows in the previous month, Genscape analyst Joe Bernardi said.

Across the country in the East, Northeast next-day gas was mostly higher on the day as warmer temperatures were on tap for Thursday. Highs in New York City were forecast by AccuWeather to reach the mid-80s, 5 degrees above normal. And aside from a brief break on Friday, the region was set to see a warming trend spread across the Midwest and eastern United States this weekend into next week for stronger demand.

Monday is expected to be the peak of this summer surge with highs currently forecast in the mid-90s for places including Chicago, Cincinnati, Washington D.C., Philadelphia and New York, according to Radiant Solutions. In addition to the heat, plenty of tropical moisture will be in place, ramping up humidity levels and pushing heat index values over 100°F.

“While areas from the Southwest to the Plains have scorched so far in June, Monday looks to be the hottest day of the year thus far for many cities in the East, along with plenty of humidity to make conditions feel even more oppressive,” said Steve Silver, senior meteorologist with Radiant Solutions.