Natural gas prices at points key to Mexico surged above $8.00/MMBtu this week as hot weather in North America and lingering production concerns drove bullish sentiment in the market. 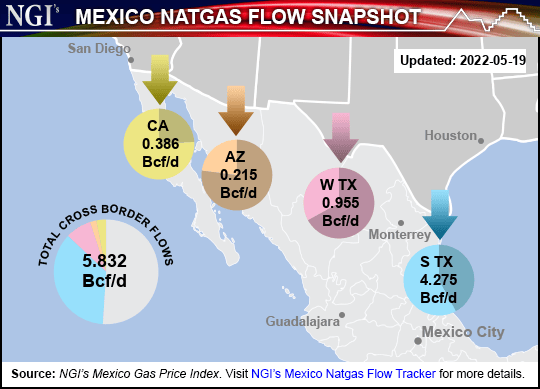 Analysts continue to see pricing being pushed to the upside in the months ahead.

The U.S. Energy Information Administration (EIA) expects natural gas delivered to electric generators to average nearly $9.00/MMBtu between June and August, which would be more than double last summer.

Warm temperatures in Mexico, meanwhile, are fueling record gas burns for power generation, and in particular, driving demand on pipelines in the country’s West.

This is “reinforcing the gas-to-gas competition that we have long anticipated” between West Texas and other regions with respect to Mexico, Wood Mackenzie analyst Ricardo Falcón said.

Incremental demand from both the Wahalajara system and the Samalayuca-Sásabe pipelines is driving the demand. So far in May, Wahalajara’s aggregate flows are crossing the 0.82 Bcf/d mark, Falcon said.

The “potential for these Mexican assets to lead a continued expansion” in imports of U.S. natural gas “is sizable,” Falcón said.

Mexico imported 5.83 Bcf via pipeline from the United States on Thursday. The 10-day average was 5.69 Bcf/d, according to NGI calculations.

U.S. output, meanwhile, continues to underwhelm. Natural gas production fell for a third day on Wednesday to about 93.7 Bcf, well below the 97 Bcf high of recent months. Shoulder-season pipeline maintenance is being blamed for the sluggish figures.

In Mexico, the natural gas market is gearing up for its annual contract renewal process in June. On Wednesday, Sistrangas operator Cenagas jointly held a conference with Comisión Federal de Electricidad (CFE) to discuss the process and the new terms and conditions that are coming into play.

“It seems that Cenagas wants to help CFE in becoming a leading supplier to Sistrangas shippers,” a source told NGI’s Mexico GPI.

The new terms and conditions would determine how balances on the Sistrangas are measured and billed. This year, Cenagas has had to inject gas into the system on multiple dates as the system’s line pack has remained consistently below optimal conditions.

“The new terms and conditions could be quite disruptive,” the source said.

Mexico’s Sistrangas five-day line pack average rose this week, hitting 6.867 Bcf on Wednesday (May 18). This is the highest level in months, and within the optimal line pack of 6.86-7.29 Bcf needed to guarantee sufficient pressure in the system.

Southeast production dominated the total, with 722 MMcf from the region injected into the pipeline system, down 9 MMcf from the previous week.

On Thursday, the EIA reported an injection of 89 Bcf natural gas storage for the week ended May 13. The print was in line with the expectations of analysts.

The South Central region led all regions in the United States with an increase of 32 Bcf. This included a 24 Bcf injection into nonsalt facilities and a 10 Bcf increase in salts, according to EIA. Until Mexico develops storage capability, this is the storage system most readily available to the country.