With only pockets of lingering cool weather across the United States, spot gas prices moved lower for the April 27-May 1 week as the spring season got under way. Led by an extensive sell-off on the East Coast but countered by gains on the West Coast, NGI’s Weekly Spot Gas National Avg. ultimately fell 5.0 cents to $1.545. 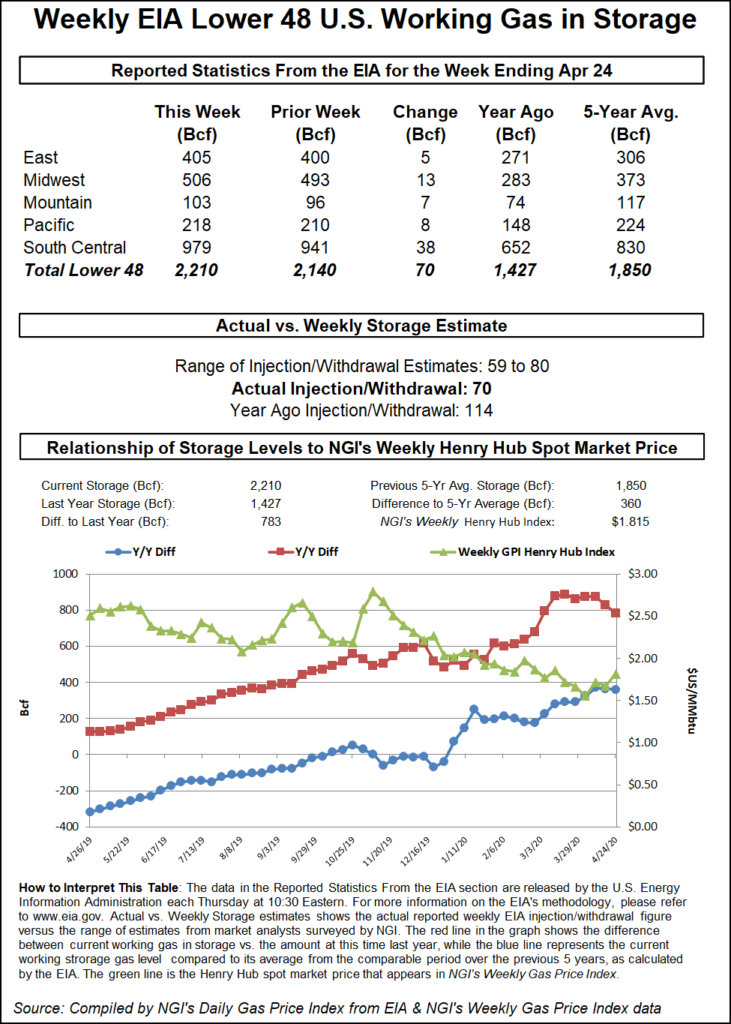 In the Northeast, Transco Zone 6 NY spot gas prices plunged 39.5 cents week/week to average $1.350 as temperatures were forecast to climb to near 70 degrees over the coming days. Similar gains were seen across the region, while farther north, New England points posted more substantial losses.

Prices declined between 10 and 25 cents at most Southeast markets, while Louisiana points matched the decreases. Henry Hub prices averaged $1.670 for the week, off 14.5 cents week/week.

The majority of Texas markets fell less than 20 cents week to week, while Permian Basin pricing bounced back from unprecedented lows recorded in the previous week. Waha prices averaged $1.390, up $1.670.

Western U.S. markets also strengthened given the unusual heat that’s been hovering in the region, which forecasters expect to intensify through at least the first week of May. In the Rockies, Northwest S. of Green River climbed 17.5 cents week/week to average $1.475.

Nymex futures yo-yoed throughout the week as the market struggled to determine a fair price for gas given ongoing demand destruction from the coronavirus and the expected decline in production stemming from massive pullbacks in activity.

The front of the curve continued to trade in wide ranges, but when the dust settled on the April 27-May 1 week, the June Nymex gas futures contract was only 2.6 cents lower than where it started the week, settling Friday at $1.890. July slipped 1.9 cents to $2.134.

Bespoke Weather Services said the market continues to be “on edge” given the expected drop in production, with Friday’s session a perfect example of the intraday volatility that can arise with each new nugget of information.

Top-day data pointed to a more than 2 Bcf drop in production, although the first of the month typically lends itself to significant revisions. However, the decline was enough to send the June contract briefly above the $2.00 level before weak cash prices brought sellers back into the fold, according to Bespoke Weather Services.

“Our stance on the big picture remains the same,” said Bespoke analyst Brian Lovern. “We need to see the supply/demand balance tighten significantly in order to see any sustainable rallies at the front of the curve.”

While any dips in production may “excite the market, leading to pops,” Bespoke needs to see evidence that demand is coming back from the economic shutdowns. Several states across the Lower 48 began easing restrictions on Friday, but it’s too early to tell how much of an impact these moves may have on demand. Although some sectors are sure to see a bounce, power burns may remain soft given the usual lull that occurs in the spring.

“LNG intake is currently more than 2 Bcf off its highs, which is negating some of the production declines already,” Lovern said. “Without stronger tightening, risk of full storage remains in play, although even in such a scenario, winter could still be bullish, assuming that demand is back to reasonable levels by that time and production continues to decline.”

Meanwhile, Bespoke said summer weather will likely be supportive, but there are still a few weeks remaining before that will gain importance from a market perspective.

For now, it appears that the extensive damage to demand has storage inventories on track to reach impossible levels of more than 5 Tcf by the end of the injection season. On Thursday, the Energy Information Administration (EIA) reported that inventories grew by 70 Bcf, boosting stocks to 2,210 Bcf, 783 Bcf above year-ago levels and 360 Bcf above the five-year average.

Broken down by region, the South Central reported a slightly higher-than-expected 38 Bcf injection into inventories, including a 24 Bcf build into nonsalt facilities and a 13 Bcf add in salts, according to EIA.

The Houston-based firm said the next EIA report could point to a figure that close to the century mark, which may have a “profound” impact on the June contract and the balance-of-summer strip. “In addition, the market will concurrently be digesting daily storage data for a week with five to 10 fewer total degree days according to recent weather forecasts.”

Until then, the market “will hold its breath” while waiting to see what May production looks like, leaning on significantly warmer-than-normal temperatures in the West and eagerly awaiting demand side effects of warmer-than-normal temperatures in the Southeast and Gulf Coast which are forecast to arrive over the weekend and intensify early next week.

Spot gas prices across the Lower 48 declined Friday as soggy conditions were expected to clear in the coming days on the East Coast, while heat anchored over the Southwest and southern Rockies was set to slowly spread eastward.

NatGasWeather expects light national demand to gradually increase during the week as cooler air sweeps across much of the country, although the forecaster noted the chilly conditions would ease any early season heat over Texas.

“The pattern for May 11-17 favors cool shots continuing across the Midwest and East,” while it is forecast to be warm across the southern United States, “but not hot. The natural gas markets will have to wait for more intimidating heat a little while longer.”

With insignificant demand on the East Coast in the coming days, spot gas markets in the region put up the largest decreases. Algonquin Citygate prices for gas delivered through Monday averaged $1.305, down 21.0 cents day/day.

The seasonal lull in demand lends itself to a slate of pipeline maintenance and from Monday-Friday, Empire Pipeline is set to conduct an outage that is to affect operations across the entire pipe, according to Genscape analyst Josh Garcia.

Specifically, the work simultaneously isolates two segments of the Empire Connector Line to tie in facilities being constructed under the Empire North Project. This results in four separate impact zones on the pipeline, Garcia said.

The more significant of the two segment isolations is the Talisman and Shell gathering systems in Northern, PA, which are to be shut in for the duration of the event. These locations have aggregated a consistent 342 MMcf/d of production over the month of April, although reroutes are possible because of the interconnected nature of the region, according to Garcia.

Another significant isolation cuts off the entire northern line of Empire that runs east to west and comprises the Original Line in the west and the aptly named East Line, which converge southeast of Rochester, NY.

“These meters have aggregated net demand of 219 MMcf/d over the last month,” Garcia said.

Within this segment lie the Chippewa border location with TC Energy Corp.’s Canadian Mainline, three interconnects with National Fuel Gas (NFG) and one with Dominion Transmission, all netting demand over the last 30 days, according to Genscape.

However, with NGI pricing data showing Dawn at a premium over Dominion North and Niagara, which represents NFG’s flows into the TC Energy Mainline, “if these locations don’t shut in, flow economics suggests that the domestic interconnects will flip and serve…Mainline demand,” Garcia said. “In summary, this event will impact operations across the pipe, which will have wider implications to supply and demand within the region.”

Spot gas was less than 10 cents lower day/day across the country’s midsection. Henry Hub slipped 3.5 cents to $1.650 for gas delivered through Monday. Interestingly, Chicago Citygate prices were up 8.5 cents day/day to $1.720 amid some hefty gains on Nicor Gas.

Small losses were seen throughout most of Texas, while the western pricing hubs continued to march higher. El Paso Permian cash was up 15.5 cents to $1.460.

Even as Old Man Winter refuses to leave without fight, storage inventories continue to refill. Western Canada storage added 12 Bcf for the week ending April 24, the largest build since 2017, according to TPH. The hefty injection is reflective of a functioning storage regime under the TC Energy’s Temporary Service Protocol and soft local demand, analysts said.

TPH data showed that intra-Alberta demand was running about 0.3 Bcf/d below normal seasonal levels, and regional data showed deliveries into the oilsands made up around 0.15 Bcf/d of the delta as shut-ins reduced demand.

“This order of magnitude impact is in line with our expectations and relatively minimal relative to roughly 2.5 Bcf/d of total consumption in the region as operators continue to steam reservoirs despite production being held back,” said the TPH team.

The analysts continue to monitor gas receipts as an indicator of oil shut-ins, but still see only “negligible” impacts so far. Flow data for the final week of April suggested another large build in the coming week, with TPH modeling 13 Bcf verus norms of 6 Bcf.

In Eastern Canada, storage showed a draw of 2 Bcf versus norms of a 4 Bcf build. The late season draw was much needed, according to TPH, as it reduced the surplus to the five-year average from 61% to 48%.