California state oil/natural gas officials have scheduled the first in a series of all-day public workshops for Feb. 19 in Los Angeles to gain feedback on draft hydraulic fracturing (fracking) rules for the state. 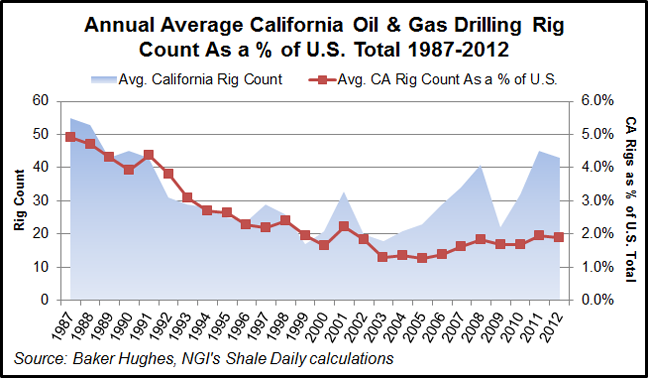 The draft rules already have prompted the San Francisco-based Center for Biological Diversity to file a lawsuit in a California Superior Court earlier this year (see Shale Daily, Jan. 28) seeking to get the state to enforce existing laws governing hydraulic fracturing. Otherwise, the environmental center alleges operators are operating with no guidance and will continue to do so while the draft rules go through a time-consuming regulatory process.

The proposed rules currently are a “discussion draft,” according to the California Department of Conservation’s Division of Oil, Gas and Geothermal Resources (DOGGR), which is conducting the upcoming public meetings. Subsequent all-day workshops will be held in Bakersfield and Sacramento on dates still to be determined.

Conservation Department Chief Deputy Director Jason Marshall called this month’s workshop a “first step” in getting all of the parties “engaged,” including government, the general public, nongovernmental organizations and the oil/gas industry.

California drilling makes up only a small percentage of the country’s rig activity, according to Baker Hughes data and NGI‘s Shale Daily calculations. In 1987 the state accounted for 4.9% of all oil and gas rigs in operation within the United States. That percentage bottomed at 1.3% in 2004 and 2005, before rebounding to 1.9% in 2012.

Marshall said the discussion draft regulations focus on “evaluation of wells before fracking takes place and monitoring the process during and after the fracking to ensure that the well is not damaged and no leaks occur in sensitive underground areas, thus protecting groundwater.”

According to California’s oil/gas supervisor, Tim Kustic, all wells in the state must be constructed to “robust construction standards.” Kustic emphasized that these regulations have been on the books in California for decades, and for him, they already ensure against environmental harm.

“It is important to understand that the hydraulic fracturing regulations we are developing are an addition to a large body of law and regulations already in place,” Kustic said.

The first workshop will have three morning sessions, a lunch break and several afternoon sessions. “Each session will focus on a component of the discussion draft,” a DOGGR spokesperson said. “One session also will solicit comments and conversation about topics not already included in the discussion draft.”