Feed gas deliveries to U.S. liquefied natural gas (LNG) export terminals hovered near a three-week high on Thursday in a bright spot that’s likely to be short-lived as pain continues throughout the global market and American cargoes have largely been priced out of Europe where headwinds are keeping prices flat. 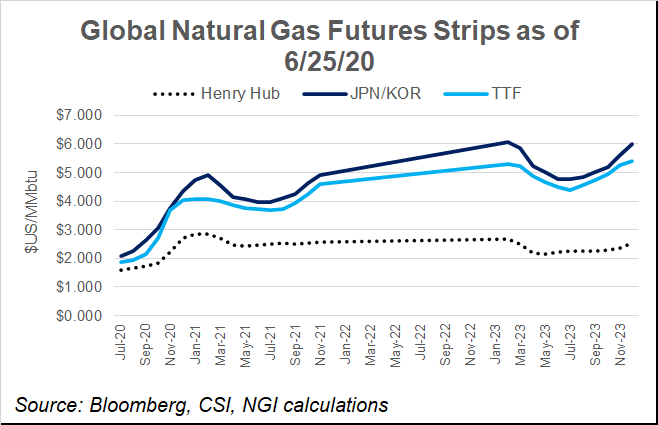 The continent has been the leading destination for Lower 48 LNG with 139 of the 269 cargoes from January through mid-June going to Europe, according to NGI calculations.

When European prices cratered last month on oversupply and a lack of demand, it prompted dozens of U.S. cargo cancellations. However, as prices have risen and supply and demand has worked into a better balance, U.S. exports have been at a disadvantage as other dominant producers have stepped up production to retain market share.

Buyers in Southern Europe have steadily imported cheap LNG in favor of oil-indexed pipeline gas from places that include Algeria, but Northwest Europe has seen a dramatic drop in LNG imports since May. While that has helped support prices on the continent, it’s also created an opportunity for Russia and Norway to increase pipeline deliveries.

As LNG imports slowed through June, Norway increased production to 10.5 Bcf/d from a May average of 9.2 Bcf/d, Tudor, Pickering, Holt & Co. said Thursday. When prices in the UK and Northwest Europe began to rebound in recent weeks, Poten & Partners analyst Oleg Vukmanovic said Norway ramped up production from the Troll gas field in the North Sea to not only take advantage of strengthening prices, “but also to check the rally” before it could open the U.S. LNG arbitrage with Europe.

“This is an interesting sign that Norway is using its swing-producing assets defensively to prevent that U.S. LNG from coming back into Europe and taking more of its market share,” Vukmanovic said during a webinar this week.

Despite the drop in LNG imports, European gas prices continue to remain flat. “The rebound in flows from Norway and Russia have mitigated the considerable drop in LNG cargo arrivals and send-out month-on-month,” said Schneider Electric analyst Balint Balazs.

Cargoes are also being diverted to Asia, where spot prices are coming under pressure as more volumes are being offered for delivery over the next month or two.

The decline in European LNG imports driven largely by U.S. cargo cancellations and other workarounds on the continent had helped to slow the pace of injections into storage sites that are brimming.

In one of those workarounds, European traders had booked a significant amount of capacity to utilize Ukranian storage. In recent years, the country has encouraged European players to use excess storage that it doesn’t need to meet domestic demand. While using Ukranian capacity is nothing new, storage is filling far quicker this year and stood at more than 60% of capacity on Thursday.

Transmission system operator Ukrtransgaz warned on Tuesday, however, it would need to conduct maintenance from August through October on the Budince interconnection, a critical outlet for moving European gas from Slovakia to Ukraine. The maintenance could stop flows completely, raising the specter of even higher storage inventories on the continent and additional pricing pressure.

With little change in the fundamental outlook, Goldman Sachs Commodities Research said in a note to clients on Thursday LNG export cancellations were likely to add more than 760 Bcf to U.S. gas storage by the end of October, which could force additional production shut-ins “to prevent a storage breach.”

The financial firm led by analyst Samantha Dart lowered its October Henry Hub forecast by 35 cents to $1.40/MMBtu and said the prospect of high storage inventories and more shut-ins is necessary in a world teeming with natural gas and little demand.

“In our view,” said the Goldman team, “this is effectively the last shoe to drop in a global gas rebalancing process that started with Asia pricing its LNG lower to push excess cargoes toward Europe, followed by Europe sorting its resulting gas market overhang out by pricing high-cost gas supply — U.S. LNG — out of the market.”