Technical trading and broader support from recovering oil markets drove a rare move higher for natural gas forward prices just as the final nail in winter’s coffin was hammered in. 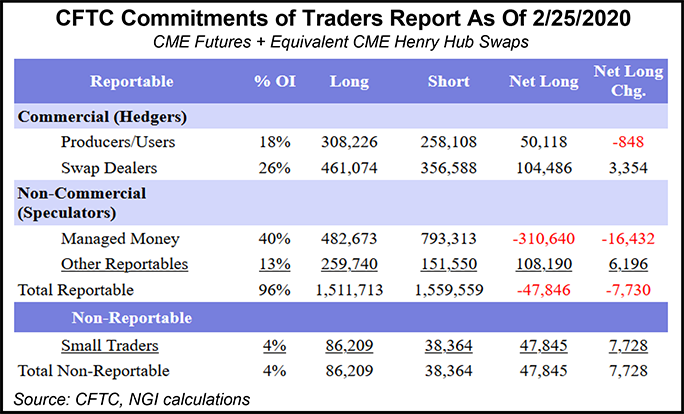 With tight supply-demand balances intact, the April contract rose 8 cents on average during the Feb. 27-March 4 period, while the full summer strip (April-October) picked up an average 7 cents, according to NGI’s Forward Look. Smaller increases were seen further out the curve.

Mounting fears over the coronavirus led to a dramatic pullback in oil and stock markets late in the final days of February, but a modest rebound over the next few days provided some uplift to natural gas prices across the Lower 48. Some potential short-covering following the April Nymex contract’s move down to $1.642 on Feb. 28 also likely factored into the rally in the natural gas market despite an ever-expanding building of short positions by speculative traders.

Short positions have reached more than 500,000 contracts, more than double levels at the beginning of winter and nearly 10 times early February, according to EBW Analytics Group. “Although our most likely scenario calls for continued downward pressure and further expansion of speculator net short positions in the near term, a potentially massive short squeeze and short-covering rally cannot be fully ruled out,” the firm said.

However, warm forecasts regained the upper hand by Thursday and sent the April contract back down to $1.772 and May down to $1.813.

With a couple of months to go before any potentially intimidating heat to spark demand, market observers are considering the impacts of sub-$2 gas on supply. Mobius Risk Group said the weak pricing environment should behoove producers to consider the prospect of “legging in” to fixed-price protection by focusing first on unhedged basis exposure.

“Calendar 2021 basis in producing locations such as Appalachia and the Rockies offer attractive entry levels from which to eventually layer on the comparable Nymex leg,” Mobius said. “From our perspective, there are few assets across the Lower 48 which produce adequate full-cycle returns at less than $2.00 for multi-year periods, and thus more creative approaches to capital preservation are required.”

“Producer earnings calls seemed to largely suggest cutting output to maintenance levels near 4Q2019 production, in most cases short of outright declines for 2020.”

For now, though, Lower 48 dry gas production is in retreat. Genscape Inc. showed Lower 48 volumes averaging 92.6 Bcf/d through the first four days of March, which is down around 0.6 Bcf/d from the average over the final seven days of February.

The Gulf Coast and Permian Basin were seeing the most significant declines, and Genscape analysts said about 0.6 Bcf/d was offline because of pipeline freeze-offs in the Rockies.

Despite a slowdown in production growth, the supply picture remained robust as storage inventories already are well above historical levels and forecasts for a mild March are boosting end-of-season projections almost daily. Some market observers pointed to a year/year surplus of more than 900 Bcf by the end of the month, and the latest weather forecasts remained warm over the next 15 days and likely beyond.

On Thursday, the Energy Information Administration (EIA) said inventories for the week ending Feb. 28 dropped by 109 Bcf, in line with market estimates ahead of the report. The reported draw also was close to the five-year average of 106 Bcf, but far below the 152 Bcf pull seen in the similar week last year.

Bespoke Weather Services said the print “reflects balances that are back tighter, supportive of prices at these low levels, all else equal, though we are still fighting a very warm, low demand weather pattern.” The firm’s end-of-season projection is now around 1.96 Tcf, “higher than a week ago thanks to continued warmth.”

By region, the East and Midwest each withdrew 33 Bcf week/week. The Mountain region pulled 7 Bcf, while the Pacific saw a net injection of 1 Bcf. EIA recorded a 37 Bcf withdrawal in the South Central; salt stocks decreased by 15 Bcf, while nonsalt saw a 23 Bcf drawdown.

Meanwhile, Bespoke’s weather outlook for the next 15 days, already more than 70 gas-weighted degree days warmer than the long-term normal on Thursday, was adjusted marginally in the warmer direction on Friday. The shift “is enough to now project this month as the third warmest March in the historical record,” according to the forecaster.

The pattern is for temperatures to remain above to much above normal over the entire area from the Plains to the East and down into the South, Bespoke said. There are some “modest” below-normal temperatures now showing up in parts of the West in the forecast period, although the firm believes that weather models “may be overdoing the intensity of cold.”

“These discussions sound quite repetitive, but that is simply because this pattern type just refuses to change, and is not showing signs of notable change even heading into late March,” Bespoke said.

Looking ahead to mid-spring and summer, liquefied natural gas (LNG) exports may have the biggest potential to push down gas prices further, according to analysts. U.S. cargoes of the super-chilled fuel already have seen pushback amid a massive drop in demand stemming from the coronavirus, especially in China.

While U.S. cargoes to China have been near zero over the last two years because of the trade war, the reduced appetite for LNG in the Asian market has resulted in cargoes being diverted to other countries that also happen to have plump inventories following a mild winter in the Northern Hemisphere.

Cheniere Energy Inc. last month confirmed two cancellations for April delivery, one each from the Sabine Pass and Corpus Christi terminals. One cargo from Cameron LNG also was reportedly canceled late in November by secondary buyer Pavilion Energy Ltd. but it was lifted by Mitsubishi Corp., a sponsor of the Hackberry, LA, facility.

Adding to the uncertainty over when demand might start rebounding, China National Petroleum Corp. (CNPC) on Thursday reportedly issued a force majeure on all prompt natural gas imports. The reported move by CNPC, the parent of PetroChina Co., follows discussions with sellers to reschedule shipments, and plans to cancel contracted deliveries of LNG and piped gas in the short term. Cheniere has two sales and purchase agreements with PetroChina for 1.2 million metric tons/year, although a portion of the supply doesn’t start shipping until 2023 under one of the agreements.

“The market is likely to take a seasonal approach to dealing with any near-term bearish developments, potentially leading to a shallower decline than would otherwise be the case,” EBW said. “Nonetheless, the potential for an utter collapse in the front-end of the Nymex forward strip below $1.50 remains higher than the market appears to appreciate, potentially as high as 20%.”

Permian pricing stood out from the crowd during the Feb. 27-March 4 period, with sharper moves higher at the front of the curve despite the increasingly mild weather outlook.

Waha April prices jumped 27 cents for the period to average minus 2.1 cents, while a 38-cent gain in the May contract boosted the average to 18.4 cents, according to Forward Look. The full summer strip at Waha jumped 40 cents to a 39-cent average, and the winter 2020-21 tacked on 15 cents to reach $1.24.

Prices along the El Paso Permian forward curve also posted substantially stronger increases than the majority of the Lower 48, with the prompt-month contract firmly in positive territory.

As the coronavirus has roiled oil markets, analysts have lowered their projections for prices through the rest of the year. A sustained decline in oil prices could lead to lower output, which means the glut of associated gas also may slow.

In an effort to restore some balance to the oil markets, the Organization of the Petroleum Exporting Countries (OPEC) on Thursday recommended that members’ collective 1.7 million b/d reduction in output implemented in December be extended through the end of the year. In addition, because of “current fundamentals and the consensus on market perspectives,” OPEC recommended a further adjustment of 1.5 million b/d through the end of June.

However, the issues that have plagued the Permian over the last couple of years remain. A lack of adequate gas infrastructure has kept regional prices near historically low levels. Last spring, Waha plunged to a record low of minus $5.75 amid a lack of demand and robust supply, and with temperatures already unusually mild, more of the same is likely for this season.

Although Kinder Morgan Inc.’s (KMI) Gulf Coast Express brought some price relief to the region once the 2 Bcf/d pipeline began service, the move higher was temporary and prices have continued to trade in negative territory throughout the winter. KMI management said their second Permian pipeline is under construction and remains on track for an early 2021 startup.

KMI Executive Vice President and Chief Strategy Officer Dax Sanders told investors last month that although he realizes the market would like to see Permiah Highway come online earlier, construction is in the early stages and it’s too soon to project an earlier timeline for the 2 Bcf/d project.

Meanwhile, KMI’s proposed Permian Pass pipeline, which would be the company’s third conduit out of the region, does not have any signed customers despite market signals reflecting a need for the pipeline by 2023, Sanders said. Nevertheless, the midstreamer would not proceed with building the pipeline without “good solid long-term contracts…minimum 10-year take-or-pay contracts.