Natural gas production in a former darling of the onshore unconventionals, the Haynesville Shale, is getting serious looks from new suitors, including operators looking for export stores, with production on course to hit record heights, according to Rystad Energy. 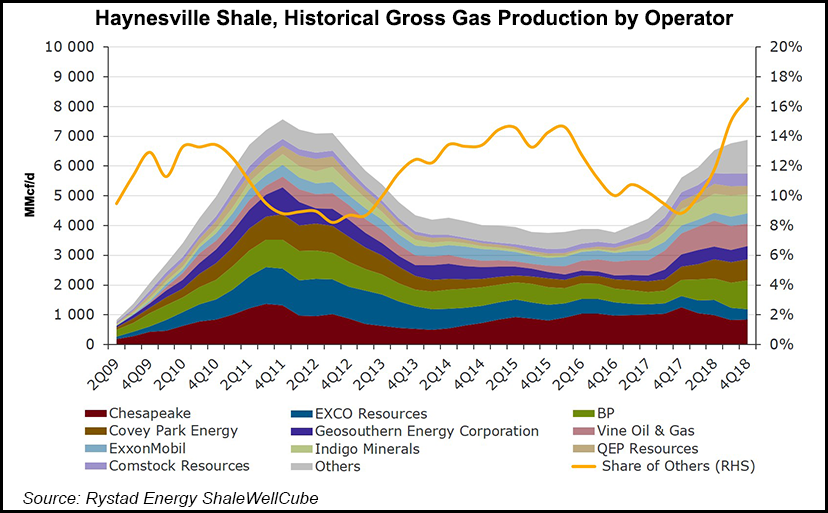 Rystad Energy research indicates the Haynesville, which straddles East Texas and northern Louisiana, was able to add 1.85 Bcf/d gross between 4Q2016 and 4Q2017 as its resurgence began. Last year, another 1.3 Bcf/d was added.

Production needs to increase by another 700 MMcf/d to hit all-time highs last seen in 2011.

“We conclude that Haynesville Shale’s revival, for the second year in a row, looks sustainable,” Rystad partner Artem Abramov said.

Currently sanctioned LNG plants are expected to produce about 65 mmty by 2022, and Rystad is forecasting U.S. output to reach 150 mmty by 2030.

“The demand for U.S. LNG is driven by the Asian market, where China, India and emerging markets will account for the largest portion of the growth,” senior analyst Sindre Knutsson said. “Rystad Energy forecasts global LNG demand to reach 560 mmty by 2030, with Asia accounting for more than 75% of total volumes.”

Before the collapse in U.S. gas prices in the second half of 2008, the Haynesville was considered to be one of the world’s most prospective gas reservoirs, with the capability to drive growth in domestic production for years.

However, sustained low gas prices from 2009 to 2011 “effectively derailed its growth prospects,” and the Appalachian Basin’s lower cost reserves drew more prospectors to the Northeast.

“After peaking in 4Q2011, gas production in Louisiana entered into a multi-year decline phase, losing almost 4 Bcf/d by the fourth quarter 2016,” according to researchers.

“Haynesville Shale is truly a different play today than it was in the first growth phase,” Abramov said. “Well productivity doubled from 2012 to 2018 measured in initial production rates and current estimated ultimate recovery. Even when productivity is normalized per perforated lateral foot, we observe 20-40% improvement over the last six years.”