If U.S. energy demand and production take off some time in the next 12 to 18 months, a potential beneficiary is the Haynesville Shale in Louisiana, which is near Mexico export markets and liquefied natural gas (LNG) export terminals. 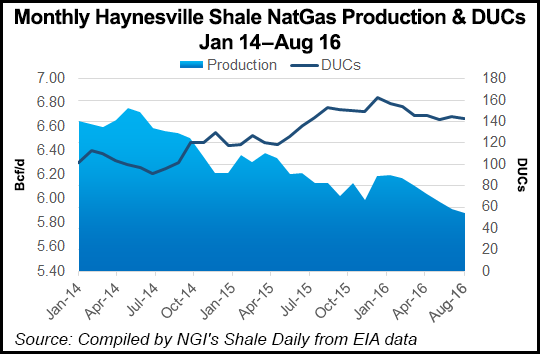 Once the focus of more than 200 drilling rigs and an output hitting 10 Bcf/d, the Haynesville is down to a little more than 20 rigs, but with technology and efficiency gains it still manages to produce about 6 Bcf/d, said Dawn Constantin, vice president for marketing and fundamentals at BP Energy, Wednesday at the LDC Gas Forum Rockies & West in Denver.

But at what price does increased Haynesville drilling become economic?

She suggested keeping an eye on upcoming 3Q2016 earnings reports from exploration and production companies to see what they are projecting for future capital expenditures. “They should talk about their balance sheet and drill plans,” said Constantin. The same efficiency gains that are being realized in the more active plays, such as the Permian and the Marcellus, now can be duplicated eventually in the Haynesville, she said.

The Haynesville has basically held its own in the past 18 months with a diminished number of rigs operating (see Shale Daily, Oct. 7;July 24, 2015). Prior to that its operators rode the roller coaster from the days of $12 gas to the big slide in prices, which has left the area with about one-tenth of the rigs it had operating at its peak.

“Haynesville is the one really big dry gas play that we are not drilling in the way the industry was a few years ago,” Constantin said. “Haynesville is really deep [10,000-13,000 feet], and that makes it very expensive to drill, even if they had better prices.

“If you have a dry gas source, in Louisiana and close to the market where it is needed, Haynesville has to be ideal, so keep that in the back of your mind.”

But the Haynesville also faces that reality that another huge dry shale gas play, the Marcellus, has seen takeaway pipeline capacity increase from 1 Bcf/d last year to 1.7 Bcf/d this year, with increasing plans for infrastructure to move more gas to the Midcontinent and eventually the Gulf Coast.

“The gas-on-gas competition just gets worse as Northeast supplies can flow to many potential markets,” she said. The whole technology change revolution is “flipping” the industry’s decades-old way of operating [west-to-east; south-to-north].

“As a result the industry has to re-learn receipt points, flows, and it changes the whole way of operations,” Constantin said, adding that all of this is being further affected by regulatory and social changes, such as the climate change-driven anti-fossil fuel movement.