Domestic production growth, incentivized by demand for U.S. LNG exports, has been a driving factor behind a run of outsized fall storage injections that has substantially driven down natural gas prices in recent weeks. 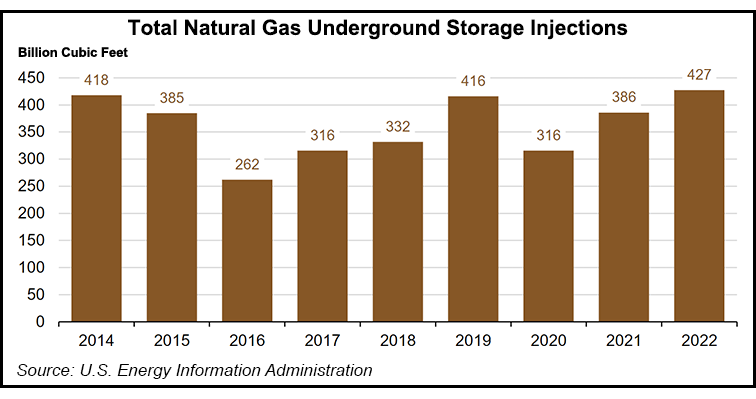 That’s according to a recent research note published by the Energy Information Administration (EIA), which found that U.S. storage injections totaled 427 Bcf during September. That was part of a run of five consecutive triple-digit injections, including a 129 Bcf build for the week ended Sept. 30 that was the second-largest weekly net injection on record for data going back to 1993, according to the agency.

The hefty September injections occurred on a combination of weak domestic demand (owing to mild temperatures) and strong production, according to EIA.

Production averaged 92.9 Bcf/d in 2019 before falling in 2020 amid impacts from the Covid-19 pandemic, according to the agency. Domestic production has since climbed throughout 2021 and 2022.

The Haynesville Shale and the Permian Basin have been leading this growth, with both plays reaching record high output over the summer, according to EIA.