The Haynesville Shale drove a “healthy” increase in U.S. natural gas permitting during November, up 20% month/month, and the play has seen an average 14% increase in permitting for four straight months, according to Evercore ISI. 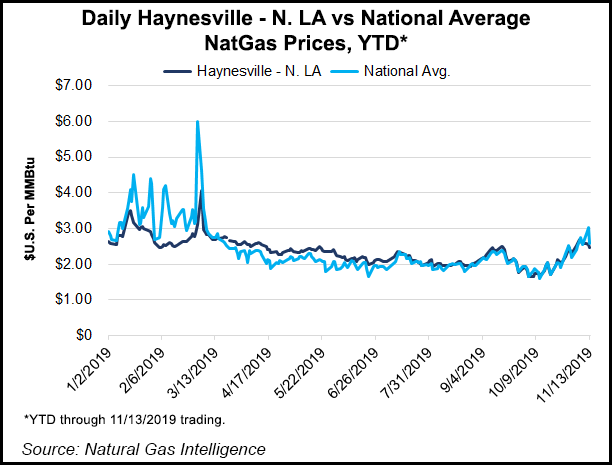 Gas permitting in the Marcellus Shale also moved 12% higher from October. Overall, domestic gas permitting was up by 13% month/month to 385, said Evercore analyst James West and his team in their monthly roundup.

The Haynesville and Marcellus gains were offset partially by a decline in gas permitting in the Utica Shale, down 18% month/month. Utica gas permitting “has declined consistently over the past three months,” West said.

Overall U.S. gas permits stood at 3,645 at the end of November, off 10% year/year. The Haynesville count was higher previously only in March (up 13%) and October (up 26%). Marcellus permitting is off by 4% year to date.

The most permitting activity in November was for Gulf Coast activity, increasing by 47%, Evercore noted. The analyst firm relies on state and federal data to compile the monthly report.

“Permits posted in the Permian rose to 969 (up 351 month/month), comprised of 88% of oil permits, 4% of gas wells and 6% of injection wells,” according to Evercore. “Stronger activity” in Texas was also driven by the Eagle Ford Shale, up 104 from October, and the Granite Wash formation, with two more permits. The increase in drilling permits also increased from a rebound in Midwest, with the Bakken Shale’s permitting up by 40 from October, and in the Mississippian Lime, with 64 more permits.

The gains were offset by a decline in permitting for the Powder River Basin (PRB), off by 390 month/month, and the Green River Basin, with 29 fewer permits. Activity was “relatively flat” in the Denver-Julesburg (DJ) Basin, which saw four fewer permits than in October.

In the DJ, public operators have only 36% of the permits, while privates have 64%, according to Evercore. Weaker permitting last month was attributed to a “steep” decline in permits filed by Lincoln Energy, down 18 month/month, and North Silo Resources, down by 13. The decline was offset by permits filed by EOG Resources Inc., which requested 16 more than in October, and by Occidental Petroleum Corp.’s requests for 11 more than the previous month.

Year to date, oil permitting has risen by 19% overall to 6,817, from “robust” permitting in the PRB, where 12,200 permits have been filed. The Green River has seen 893 permits year to date, and there has been “modest growth” in the Bakken, up by 40. Oil permitting also is stronger in the Utica, which had seen nine more than in the same 11 months of 2018.

Offsetting the oil permitting increases since the start of the year is the DJ, which has had 3,322 fewer through November, as well as the Mississippian, down 852, and the Permian, off by 634. Permits also have declined in the Eagle Ford through November by 430 and in the Cana Woodford, with 106 fewer than the first 11 months of 2018.