Natural gas production from seven key U.S. onshore regions is set to surge to slightly shy of 94 Bcf/d from August to September, with the largest share of incremental output growth expected from the Haynesville Shale, according to updated projections from the Energy Information Administration (EIA). 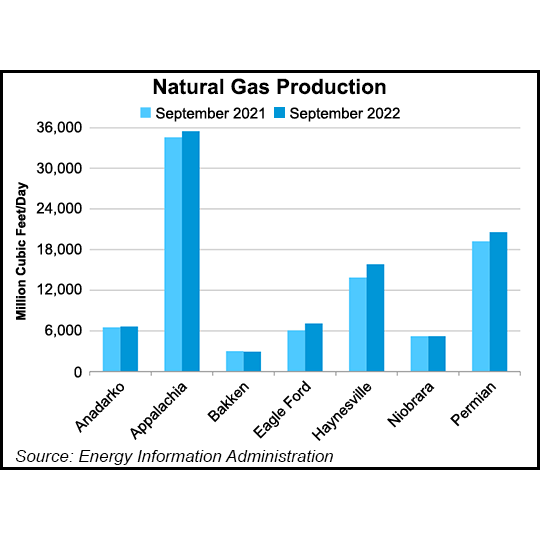 Total natural gas output from the seven regions tracked in EIA’s Drilling Productivity Report (DPR) will climb to 93.835 Bcf/d in September, a sequential increase of 673 MMcf/d, EIA said in the latest release of the monthly report, published Monday.

In addition to the Haynesville, the DPR also tracks production trends in the Anadarko, Appalachia and Permian basins, as well as the Bakken, Eagle Ford and Niobrara formations.

The Haynesville is on track to post the largest monthly increase at 192 MMcf/d, which would see its August output reach 15.835 Bcf/d. Output gains are also forecast from the Permian (167 MMcf/d), Appalachia (154 MMcf/d), Eagle Ford (116 MMcf/d), Bakken (34 MMcf/d) and Niobrara (11 MMcf/d), according to the DPR modeling. Anadarko output is projected to decline marginally from August to September.

Oil production from the seven regions, meanwhile, is projected to surpass the 9 million b/d mark in September, reaching 9.049 million b/d; that would represent a 141,000 b/d sequential increase, the DPR data show.

Total drilled but uncompleted (DUC) wells in the seven regions decreased 20 units to 4,277 from June to July, according to the most recently available data. The Permian DUC count dropped 21 units to 1,197 as of July, with the Anadarko (down six), Appalachia (down eight) and Bakken (down one) regions also drawing down their respective DUC backlogs month/month.

DUC wells were added, meanwhile, in the Haynesville (up 11), Niobrara (up four) and Eagle Ford (up one) regions, the EIA data show.