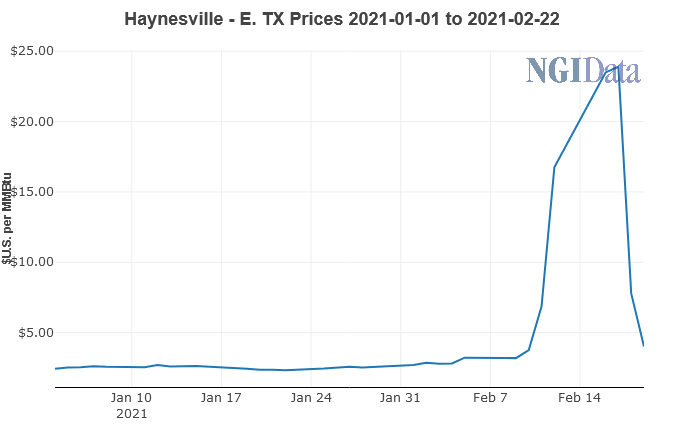 A conference call to discuss 4Q2020 performance and the outlook for 2021 was held in the midst of the deep freeze in Texas, which sent gas prices soaring.

Comstock controls 323,000 net acres in the Haynesville/Bossier formations across East Texas and North Louisiana, one of the gassiest regions of the country. The company, like most of its peers, adopted a moratorium on bringing new wells online in 2Q2020 during the pandemic. Some completion activity resumed in the back half of 2020, as the executive team bet on a bump in gas prices this winter. That prescient move paid off, and the thirst for gas last week cemented its options for 2021, Allison told analysts.

Comstock made hay in the midst of the icy blast as it has “more undedicated gas in Haynesville than any other company,” the CEO said. The company generally markets about 2 Bcf/d and sells another 1.2-1.4 Bcf/d. The events last week give the management team a “really good solid feel,” for 2021. “We’ll have great free cash flow in ’21, and we’ll carry over that in 2022.”

The Frisco, TX-based independent, majority owned by Dallas Cowboys owner Jerry Jones, already was seeing “very good…prices so far,” CFO Roland Burns told analysts. “With all the events in Texas in the last week, obviously, we’ve seen incredible spot prices for our swing gas.”
Comstock was more exposed to the spot market than normal in January and into February. While that kind of bet doesn’t always work, “that’s going to pay off, I think, handsomely, and improve price realizations in the first quarter.”

The core Haynesville/Bossier development’s proximity to the Gulf Coast allowed Comstock to “take advantage of some of these really super-premium prices,” Burns said. With few “huge midstream commitments,” the company has “a lot of flexibility in our marketing, and so we were able to move gas to some really great premium opportunities.”

Asked what proportion of Comstock basis typically sold in a quarter, on bidweek versus the spot market, Burns said the target is “just about 75-80%” index basis because those prices “match up well with our hedging program.” Spot prices might not match up, and Comstock doesn’t want to go to a “much higher percentage” because it has new wells coming on.

“So we don’t want to ever be caught having to buy gas,” Burns said. “That’s our basic rule.” For the month of February, Comstock sold 35-40% of its gas on the spot market, “lighter” than in January.

“So we’re a little bit more in the spot market than normal,” he said. Comstock had “a big ramp-up in production going on in the first quarter. So that’s part of that. You want to be conservative as you’re bringing on a lot of wells because you don’t have the exact timing. But I think that’s paid off pretty well in both January and February because prices have been moving up.

“And then, obviously,” he said, last week was “like hitting the jackpot at some of these incredible prices. I mean, frankly, we were able to get super-premium prices for a material amount of production anywhere from $15/Mcf to maybe some even at $179/Mcf,” which were some of the spot prices.

Beyond the frigid weather, keeping up with gas demand is going to create some challenges across the industry. However, “we’re in the right area,” Allison said. “We’re a couple of hundred miles from this corridor where you need to be.”

Transportation costs “are a lot cheaper than if you’re in Appalachia. They’re probably $1.00, $1.50 cheaper in certain areas. And we have pipelines available that if you do need more gas, we can really supply it…”

Comstock was at “full production” through last Tuesday (Feb. 16). That’s when the issues began at production sites. In addition to shutting in wells, water haulers were stuck, unable to traverse the icy roads to service the infrastructure.

Shut-in production from the multi-day ice storm was estimated at “close to 20% of our normal production levels,” said Burns. Allison doesn’t expect to see a “huge impact from shut-ins…but if anything, it should lean toward the positive.”

After “playing defense in 2020, Comstock is ready to “get back to our full strength,” Burns, who also is president, said. Higher prices for gas provide an opportunity “to get caught up really quick on the balance sheet. That’s the major goal of the company. And we wanted to put the production level at a level that’s sustainable, but also at a proper level for the leverage we have…

“We’ll accomplish that in the first quarter, and then we can kind of sustain, and then…focus on free cash flow in the future. I think we have all the tools to do it so we are in perfect strength.”

Gaining more access to Gulf Coast demand markets continues to be the major goal. In addition to export/pipeline consumption, Comstock is looking to fill the gas demand hole for the industrial, refining and petrochemical complexes in Louisiana and Texas.

Some plans are tied to an expansion of Enterprise Products Partners LP’s Acadian Gas Pipeline System, a 1,300 mile-long conduit linking Louisiana and Gulf of Mexico gas to regional customers.

Now underway is Enterprise’s 80-mile Acadian Haynesville Extension, set to begin service by mid-year. The extension is designed to boost Acadian capacity to 2.1 Bcf/d from 1.8 Bcf/d. Comstock is one of the major shippers.

Going forward, the executive team needs only to decide which wells to drill and where. Ninety-three percent of the entire leasehold is held by production, nearly all weighted to gas. The production has limited basis risk because of its proximity and contracts tied to Henry Hub, Burns noted.

Comstock became one of the top operators in the Haynesville when it took over rival operator Covey Park Energy LLC in 2019. The synergies improved production overall.

“Generally, what’s happened to our inventory is that we’ve turned short laterals into long laterals, and they’ve become more economic,” Burns said. Engineers remapped some of the inventory, extended the laterals and reduced costs.

Since the last operational update, 17.7 net wells have been completed. The average initial production rate was 24 MMcf/d with completed laterals of about 9,288 feet.

With a pullback because of the pandemic and collapsing prices, Comstock produced 109 Bcf of gas in 4Q2020, versus 121 Bcf in 4Q2019. However, output was up 6% sequentially.

With an estimated 1,953 net drilling locations across the Haynesville/Bossier, Comstock is forecasting 2021 production of 1.3-1.4 Bcfe/d, 97-99% weighted to gas. Capital spending is pegged at $510-550 million. The operating plan calls for 51 net wells to be drilled and 50.5 net horizontals completed using five to six rigs.