U.S. natural gas prices may well go higher over the next 18 months to two years, but a few things could stand in their way, including stronger-than-forecast dry gas output from unconventional plays, including the Haynesville and Barnett shales, Credit Suisse analysts said Wednesday. 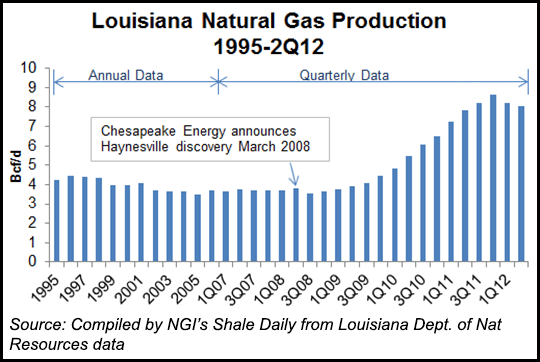 The firm’s equity research analysts, led by Arun Jayaram, expanded on some comments earlier this month about the U.S. gas market, in which he said there was “significant upside optionality” for the U.S. gas market. However, without an “extremely cold winter,” the Credit Suisse team sees several reasons why gas prices may not strengthen:

Credit Suisse adopted a “constructed outlook for gas” in 2Q2012, which would be driven by shifts in producer economics that favored liquids, as well as higher utility demand, noted Jayaram.

“The linchpin of our call was the belief the market was under-appreciating the potential for major declines in production,” he said. Conventional output is down, but an analysis of the supply data “suggests unconventional supply is more resilient than we forecasted despite a collapse in activity.”

For one thing, gas production in the Haynesville, despite a lower rig count, is higher than Credit Suisse had expected. The break-even cost of gas is $3.77/Mcf in the core of the play and $4.93/Mcf outside of the core, analysts estimate. Drilling activity in the core has declined, with an average of only 19 rigs in 3Q2012 versus the peak of 138 rigs in 32Q2010. Credit Suisse’s proprietary model estimated that July output was 5.9 Bcf/d, but “state data indicates that actual production is 7.1 Bcf/d, or 20% above our estimates.”

Why so resilient? Jayaram and his team noted that completion activity was higher than expected in the first three months of this year as operators worked through backlogs and impacts from restricted rate programs, as well as from the significant production shut-ins by the largest producer, Chesapeake Energy Corp.

Earlier this year Chesapeake shut in more than 600 MMcf/d in the Haynesville (see Shale Daily, Feb. 23). Chesapeake resumed production from the shuttered wells late in the second quarter, and “it appears the wells restarted production at higher rates,” noted Credit Suisse.

After posting 13 consecutive quarterly increases since 3Q2008, natural gas production in Louisiana fell sequentially in both the first and second quarters of 2012, according to Louisiana Department of Natural Resources data. However, production for both quarters still came in at more than 8 Bcf/d.

Even though the gas rig count has declined by more than half (54%) year/year, output has “yet to crack,” said the analysts. The reason is drilling efficiencies.

For instance, in the Barnett Shale, also a big gas producer, the industry has averaged 2.7 completions a month, representing 17% improvement in efficiencies relative to 2011. “This is an astonishing 29% improvement relative to 2010, when the industry completed 2.1 monthly Barnett wells per rig,” said Jayaram. “The same trends are evident in other key dry gas basins.”

In addition, ethane rejection has boosted gas stocks by around 300 MMcf/d, said the analyst. Processors, he noted, are rejecting ethane in the Rockies, Midcontinent and San Juan Basin. “Envantage estimates the industry is rejecting between 100,000 and 124,000 boe/d of ethane across the U.S. It appears that ethane rejection is boosting natural gas supply by approximately 275 to 300 MMcf/d.”

In the Marcellus, debottlenecking in the final three months of this year also should bring untapped supplies to market as well, according to Credit Suisse.

“The Tennessee Gas Pipeline (TGP) Northeast Supply Diversification and National Fuels Northern Access pipelines are expected to add 500 MMcf/d of takeaway capacity to the Northeast market by Nov. 1. TGP Northeast Supply Diversification will supply the New England market with 100 MMcf/d and an additional 150 MMcf/d into Canada via Niagara. National Fuel’s Northern Access project will extend from their TGP interconnect in Ellisburg, PA to the TransCanada Pipeline at Niagara, bringing 320 MMcf/d of supply with it. The key to these projects include the fact that they bypass the fully subscribed TGP 300 leg and are in close proximity to the estimated 1,000 drilled but uncompleted wells in Pennsylvania.”

The focus now shifts to winter weather. Like last winter season proved, “a warm winter in a market flush with supply of natural gas can significantly move prices lower,” said the analyst team. “The same goes for a cold winter as well…As such, we approach the winter season with a heightened level of caution and fully appreciate the relationship in heating degree day counts and residential/commercial demand.”