The natural gas industry has shown renewed affection for the natural gas-rich Haynesville Shale, but darker times may lie ahead unless proposed takeaway projects move forward, according to an analysis by Wells Fargo Securities. 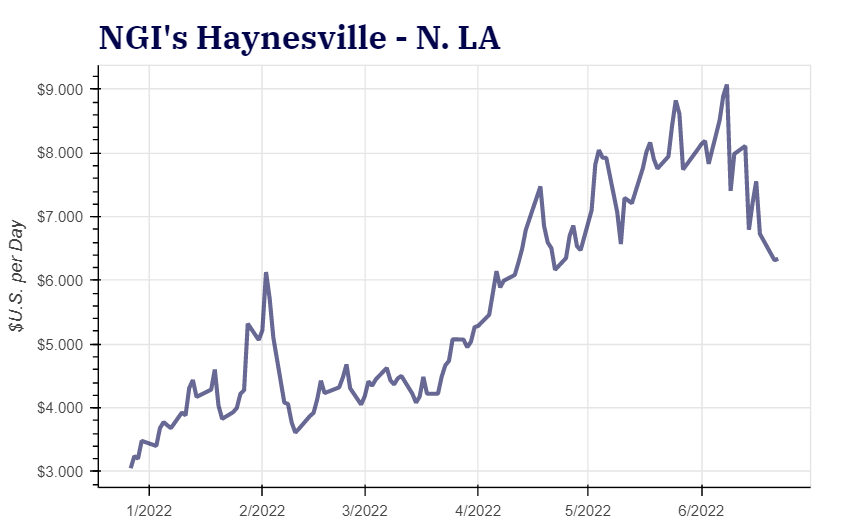 The analyst team, led by managing director Michael Blum, outlined two scenarios under which additional infrastructure would be needed in the Haynesville, which straddles northwestern Louisiana and East Texas.

The first scenario took into account projects already sanctioned. These include:

“Including the aggregate capacity of 2.35 Bcf/d from these projects, we forecast Haynesville gas takeaway will remain tight (over 90% utilization) absent additional capacity additions,” the Wells Fargo analysts said.

However, there is optimism that the Haynesville may avoid constraints altogether. Wells Fargo’s base case assumes three other projects currently proposed that may move forward. These include Williams’ 1.8 Bcf/d Louisiana Energy Gateway; DT’s 700 MMcf/d LEAP Expansion Phase 2; and the 1.0 Bcf/d LEAP looping project.

“In aggregate, these projects represent additional takeaway capacity of 3.5 Bcf/d, which would be sufficient to de-bottleneck the basin over the next five years,” the analysts said.

Analysts expect private exploration and production (E&P) operators to lead the charge, with a compound annual growth rate of around 13%. They see public E&Ps growing volumes more modestly at around 2%. Major companies, meanwhile, should see a decline of about 4% annually.

“We estimate public operators have more inventory depth and could be better positioned for the longer term,” the Wells Fargo analysts said. They noted that Chesapeake Energy Corp. and Southwestern Energy Co., in particular, are well-positioned over the long haul.

Chesapeake is one of the largest producers in the gassy Haynesville, with 350,000 net acres in the play. Two years after emerging from bankruptcy with a renewed focus on gas production, the E&P is looking to get into the liquefied natural gas (LNG) game.

During its first quarter call in May, CEO Nick Dell’Osso said Chesapeake was having discussions with “counterparties in the LNG export market.” Management indicated it was open to exploring equity stakes in liquefaction projects, supply agreements tied to international benchmarks, or even signing offtake agreements. The company also posted a job listing for someone tasked with taking the lead on new business opportunities in the LNG sector to help “optimize the company’s revenue.”

Southwestern, a top Haynesville E&P, also is holding discussions with LNG players to explore opportunities. The company already is sending one-third of its production, or about 1.5 Bcf/d, to LNG export terminals.

“We’re having conversations with current and future key LNG players and continuously looking at value-enhancing opportunities on a risk-adjusted basis…to enter into additional agreements down the line,” CEO Bill Way said during the 1Q2022 earnings call.

LNG Is Where It’s At

The Wells Fargo analysts noted that the Haynesville production growth forecast does not include any potential ramp up in activity in anticipation of new LNG export facilities. A slate of new terminals is being proposed along the Texas and Louisiana coasts, with recent geopolitical events reviving once stalled commercial discussions and accelerating momentum for these projects.

The Wells Fargo team said takeaway from the Haynesville is complicated as ample capacity exists to markets that either don’t have sufficient downstream takeaway or are less desirable markets because of lower demand and netbacks.

“However, the preferred destination for Haynesville gas is and will likely remain LNG exports,” the analysts said.

Indeed, Haynesville heavyweight Comstock Resources Inc. sees LNG as the logical next step. It sells about 14% of its gas to LNG facilities. However, in recent comments, CFO Roland Burns said Comstock is looking to develop long-term relationships with LNG shippers and “continue to tie more and more of our gas to the Gulf Coast indexes versus the regional hubs of Carthage and Perryville.”

Wells Fargo’s team estimated that current gas pipeline takeaway capacity from the Haynesville is 17.7 Bcf/d, with overall basin pipeline utilization of around 81%. However, takeaway capacity heading south to Gulf Coast LNG docks, which amounts to about 8 Bcf/d, is running full.

“Our base-case analysis (which reflects our E&P team’s production forecast) suggests 5.5 Bcf/d of new gas pipeline capacity will be required to fully debottleneck the southern corridor of the Haynesville,” the analysts said.