Natural gas production is set to rise more than 700 MMcf/d from April to May on the strength of output growth from the Haynesville Shale, and from the Appalachian and Permian basins, updated projections from the Energy Information Administration (EIA) show. 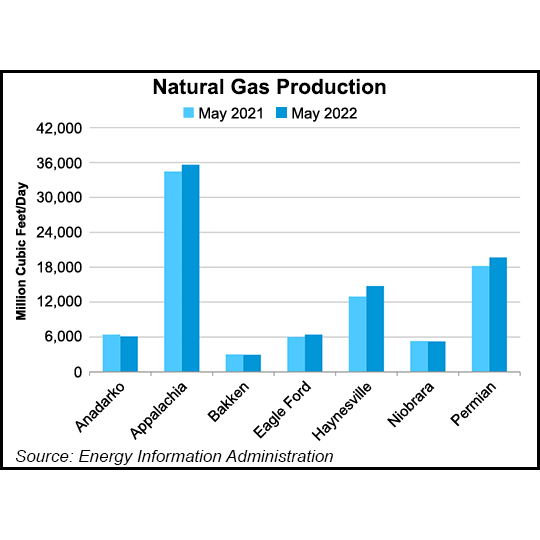 Modeling trends from seven key U.S. onshore producing regions, EIA said in its latest Drilling Productivity Report (DPR) Monday that it expects total natural gas output from these areas to climb 721 MMcf/d from April to May, reaching slightly under 91 Bcf/d.

Of the seven regions — the Anadarko, Appalachian and Permian basins, as well as the Bakken, Eagle Ford, Haynesville and Niobrara formations — only the Anadarko is expected to see natural gas output decrease from April to May. EIA said the Anadarko region is on pace for a 15 MMcf/d month/month decline.

Why Are There Natural Gas Supply Fears?

The latest domestic production forecasting comes as Nymex futures have soared to nearly $8/MMBtu, with analysts pointing to supply adequacy fears as a key catalyst driving prices higher. Only time will tell how much the pace of domestic output growth is able to quell market concerns over refilling storage and accommodating summer cooling demand.

The total number of drilled but uncompleted (DUC) wells across the seven regions fell 114 units to 4,273 between February and March, the most recent DPR data show. The Permian posted the largest drawdown for the period at 71, leaving its total DUC backlog at 1,309 as of March, according to EIA.

DUC totals also declined in the Anadarko (down 13), Appalachia (down 6), Bakken (down 11), Eagle Ford (down 11) and Niobrara (down 14) regions. The Haynesville, meanwhile, added 12 DUC wells to its backlog month/month, ending with 383 as of March, the EIA data show.