On a percentage basis, the venerable dry gas grandaddy Haynesville Shale led the major plays in terms of rigs added during a week that saw the U.S. rig count increase by 19 units. 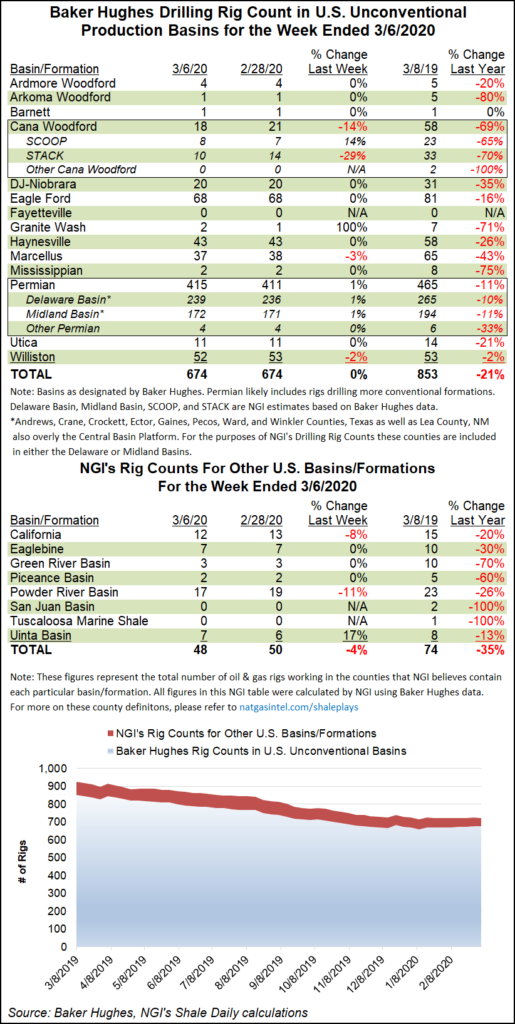 The Haynesville added three rigs to end at 29, a 12% increase from the previous week’s tally in the Baker Hughes Inc. rig count. The Cana Woodford and Granite Wash each gained by 6% while activity in the Utica Shale increased by 5%.

Seventeen land-based rigs were back in action along with two that were plying the inland waters.

Oil-directed rigs saw a net gain of 21 while the number of natural gas-directed rigs fell by 2. Horizontal rigs added 12, and eight vertical rigs joined the game while one directional rig dropped out.

The latest count is in contrast to the previous week’s, which saw the U.S. count decline by six units (see Shale Daily,July 17). A week ago Canada added 23 rigs to its count. In the latest tally, Canada was up by eight rigs, making for a North America count increase of 27 as no rigs were added or lost in the Gulf of Mexico.

Rigs going back to work is good news for land drillers, but this apparent comeback isn’t nearly enough to lift profits in the depressed sector, according to analysts at Cowen and Company. “As activity recovers, standby rigs will need to be absorbed first before drillers can show any uptick in profitability,” they wrote in a July 21 note. “We estimate there are anywhere from 50-100 standby rigs industry wide, meaning the Baker Hughes rig count may need to increase by 50-100 before land drillers realize any upward revisions to earnings.”