Including a drop-off in Haynesville Shale activity, declines in both natural gas and oil drilling saw the U.S. rig count drop seven units to 772 for the week ended Friday (Jan. 6), according to the latest count from Baker Hughes Co. (BKR). 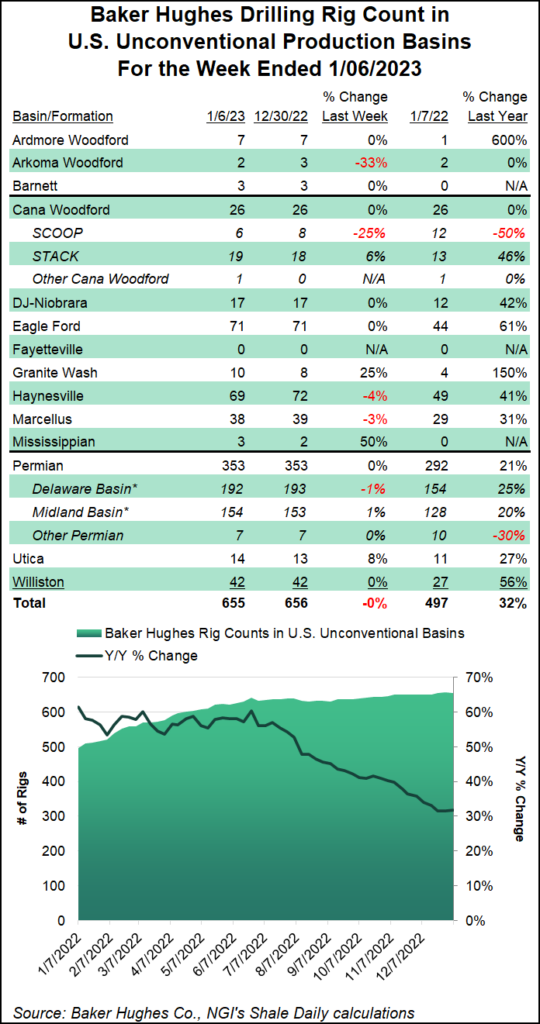 The combined 772 active U.S. rigs as of Friday compares with 588 rigs running in the year-earlier period, according to the BKR numbers, which are based partly on data from Enverus.

The Canadian rig count rebounded to end the week at 189, a net increase of 105 rigs, with activity there largely recovering from steep losses posted in mid-December. Gains included 88 oil-directed rigs and 17 natural gas-directed rigs, according to BKR.

Counting by major drilling region, the Haynesville posted a three-rig decline for the period, with the Arkoma Woodford and Marcellus Shale each dropping one rig from their respective totals. The Granite Wash added two rigs week/week, while the Mississippian Lime and Utica Shale each added one, according to the BKR data.

Counting by state, Oklahoma saw a three rig decline overall for the week, while California, Louisiana and New Mexico each posted declines of two rigs. Texas added two rigs for the period, while Ohio added one.

Domestic oil production bounced back to near pandemic-era highs in the final week of 2022, recently updated numbers from the U.S. Energy Information Administration (EIA) showed.

Domestic production, while still well below the 13.1 million b/d record level reached in early 2020 prior to widespread coronavirus outbreaks, consistently held near or above 12.0 million b/d through the second half of 2022.