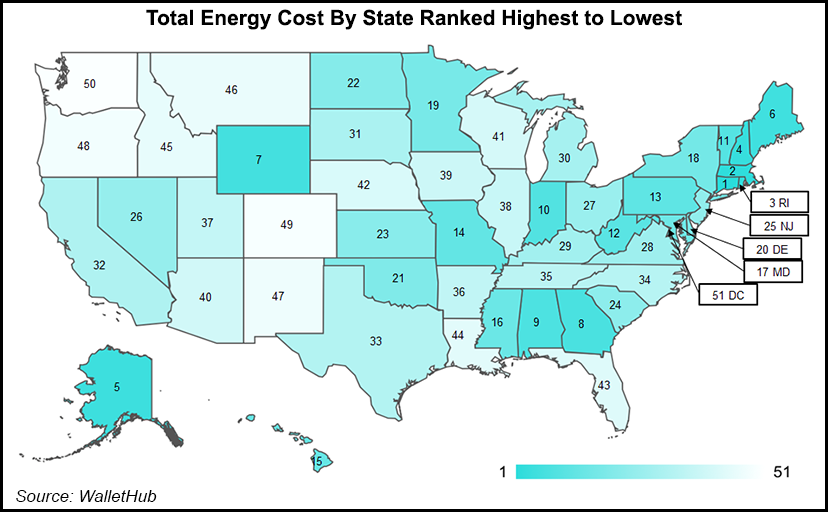 Connecticut residents pay the most of any state overall for their energy, whether it be natural gas, electricity, home heating oil and motor fuel, while Washington, DC, residents pay the least, according to a new report by WalletHub.

The Evolution Finance Inc. subsidiary found that on average, Connecticut residents spend $372/month for their energy, whereas DC residents pay an average cost of $199/month.

WalletHub compared the total monthly residential energy bills in all 50 states and the District of Columbia, reviewing the cost of electricity, natural gas, home heating oil and motor fuel. The monthly cost of electricity was calculated by multiplying average consumption by the average retail price in each state.

In terms of natural gas, the average residential price was found to be the most expensive in Hawaii, followed by Florida, Maine, Rhode Island and Massachusetts. The cheapest residential natural gas prices were in Idaho, followed by North Dakota, Montana, South Dakota and Colorado.

The average price of motor fuel was found to be the most expensive in Hawaii, followed by California, Washington, Nevada and Oregon. As for states with the cheapest motor fuel options, Mississippi led the way, followed by Louisiana, Alabama, Texas, Missouri and Arkansas. Motor fuel consumption/driver was highest in Wyoming, followed by Mississippi, New Mexico, Georgia and Oklahoma.