Hawaii Gas, the state’s sole natural gas utility, has been tapped by Honolulu authorities to buy biogas from a municipal wastewater treatment plant and turn it into pipeline-quality synthetic natural gas (SNG) for retail customers on Oahu. 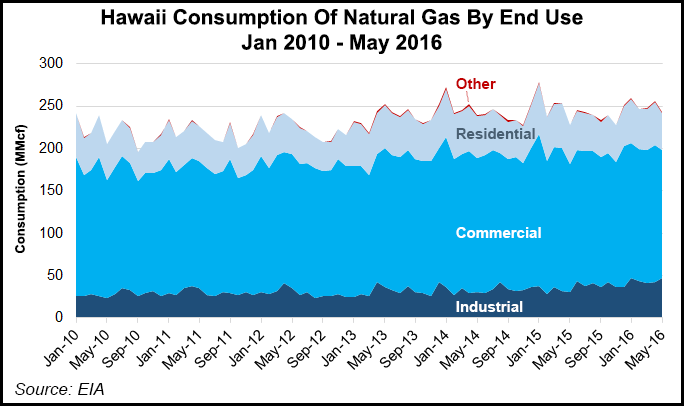 After winning a competitive bidding process, Hawaii Gas estimated it would take 12-18 months to capture, process and integrate up to 800,000 therms/year of biogas into pipeline quality SNG for customers from the Honouliuli Wastewater Treatment Plant.

Gas produced at the treatment plant is now flared, and Honolulu city/county officials expect to generate revenue and clean up the environment under the plan. The contract with Hawaii Gas runs through the end of 2024 with a provision for an extension of the deal, a spokesperson said.

Project costs and the projected added revenue stream for the city/county were not disclosed.

The project is a great example of “finding ways to leverage resources to benefit taxpayers,” Honolulu Mayor Kirk Caldwell said.

“The capturing and processing of biogas is done across the nation as one of the most efficient ways to develop renewable natural gas [RNG].”

The utility plans to install a biogas purification process to produce market-ready RNG (98% methane, 2% carbon dioxide). It also would build a connecting pipeline and blend the RNG with the SNG it manufactures and distributes in its pipeline system.

Hawaii Gas CEO Alicia Moy said incorporating more cost-effective RNG as part of the utility’s fuel mix is a “key priority” in keeping with a statewide push for a more clean energy future.

Early this year the utility issued a request for proposals seeking RNG supplies in the form of raw biogas and/or bio-methane (see Daily GPI, Jan. 13).

The state’s Hawaii Electric Co. recently cancelled a long term contract to import liquefied natural gas as a replacement for fuel oil for power generation after the acquisition of the utility by NextEra Energy Inc. was canceled.